Nicole “Snooki” Polizzi is best known for her reality star status on Jersey Shore. But many diehard fans will recall Polizzi’s past work with the World Wrestling Entertainment (WWE) Incorporation. After a recent tweet from “Snooki,” some fans are wondering if she’ll participate in the upcoming Royal Rumble. 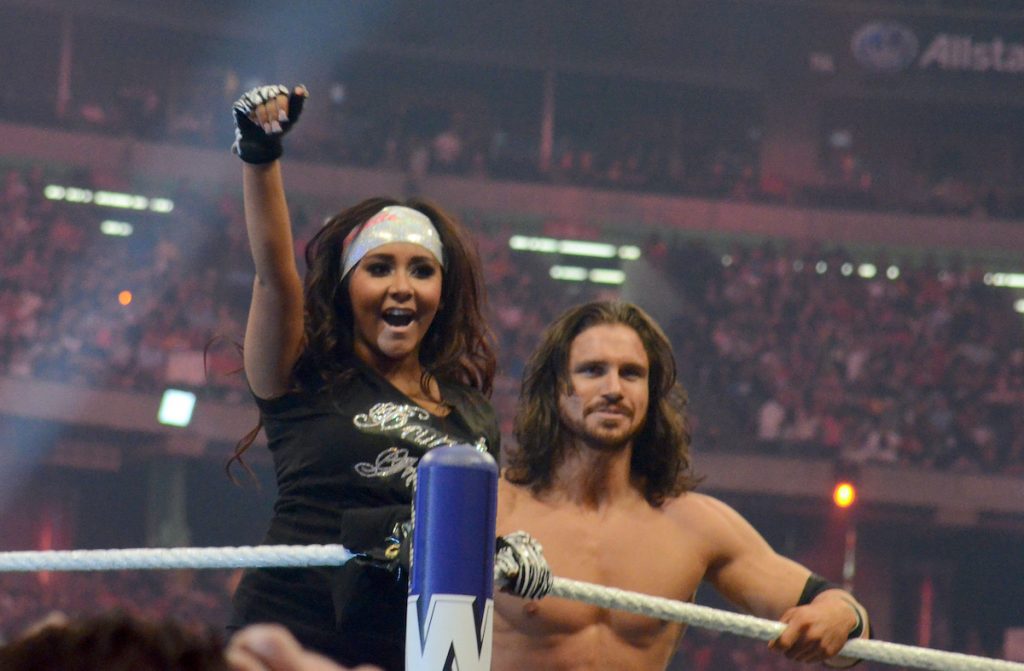 ‘Snooki’ is done with ‘Jersey Shore’

After the fallout from Angelina Pivarnick’s wedding, Polizzi decided to remove herself from the MTV series.

“Don’t hate me for my decision, but I have to do what’s best for me at the moment,” Polizzi explained on her podcast, It’s Happening With Snooki and Joey. “I am retiring from Jersey Shore. I am not coming back for season four if there is one.”

Polizzi said she wasn’t “in the mood to do [the] drama with Angelina anymore” during an interview with HelloGiggles. “I just want to be happy and positive, and film fun shows.”

According to Pivarnick, Polizzi already “had one foot out the door.” Regardless, Polizzi has moved on to other projects.

Nicole Polizzi is a businesswoman now

In addition to her personal business endeavors, Polizzi works with Deena Cortese on Meatball Merch — “the number one spot for all meatballs.” The online retailer offers t-shirts and sweatshirts that feature Polizzi and Cortese’s quintessential quotes.

When she’s not operating her fashion businesses, Polizzi is collaborating with her friend Joey Camasta on their podcast or working on content for her YouTube channel.

‘Snooki’ puts an emphasis on her fitness

In the past, Polizzi was one of the many celebrities who tried the Cookie Diet fad, which consisted of eating nine protein-based cookies and one balanced meal a day.

Now, Polizzi follows a more balanced diet. She typically opts for a protein-heavy breakfast, like a shake or bar, and tries to fit in a workout before lunch, as she explained to The Cut in 2016.

At the time, “Snooki” had rediscovered her appreciation for the gym and was into “working out in classes.” Now, as documented on her social media, Polizzi often works out with a trainer.

Is Nicole ‘Snooki’ Polizzi going to do the WWE Royal Rumble?

Polizzi has a history with the WWE, having appeared in two WWE Monday Night Raw episodes in 2011. The brawl led to an eventual tag team match at WrestleMania XXVII. Later, “Snooki” was awarded the 2011 A-Lister of the Year Slammy Award.

Now, it seems like Polizzi is eager to get back into the ring. She took to Twitter on Dec. 21 to share a highlight reel of her time on WWE, writing: “LOL, now that I’ve gained muscle, i wanna see my ass back in the ring.”

Many fans were excited about the prospect of Polizzi’s return to wrestling.

“So do I it was good seeing you on WWE,” a fan commented.

Others tweeted at the WWE and Vince McMahon directly, imploring them to include Polizzi in the upcoming Royal Rumble.

“The Royal Rumble is just a month away! Make it happen @WWE @VinceMcMahon” someone else replied.

“ROYAL RUMBLE SEASON IS COMING UP BABE WE HOPE UR A SURPRISE ENTRANT,” added another.

It’s unclear whether the WWE has heard of Polizzi’s desire to re-enter the wrestling ring. Stay tuned to Showbiz Cheat Sheet for updates.

Who is Connagh Howard? Love Island 2020 cast member DUMPED from the villa – The Sun