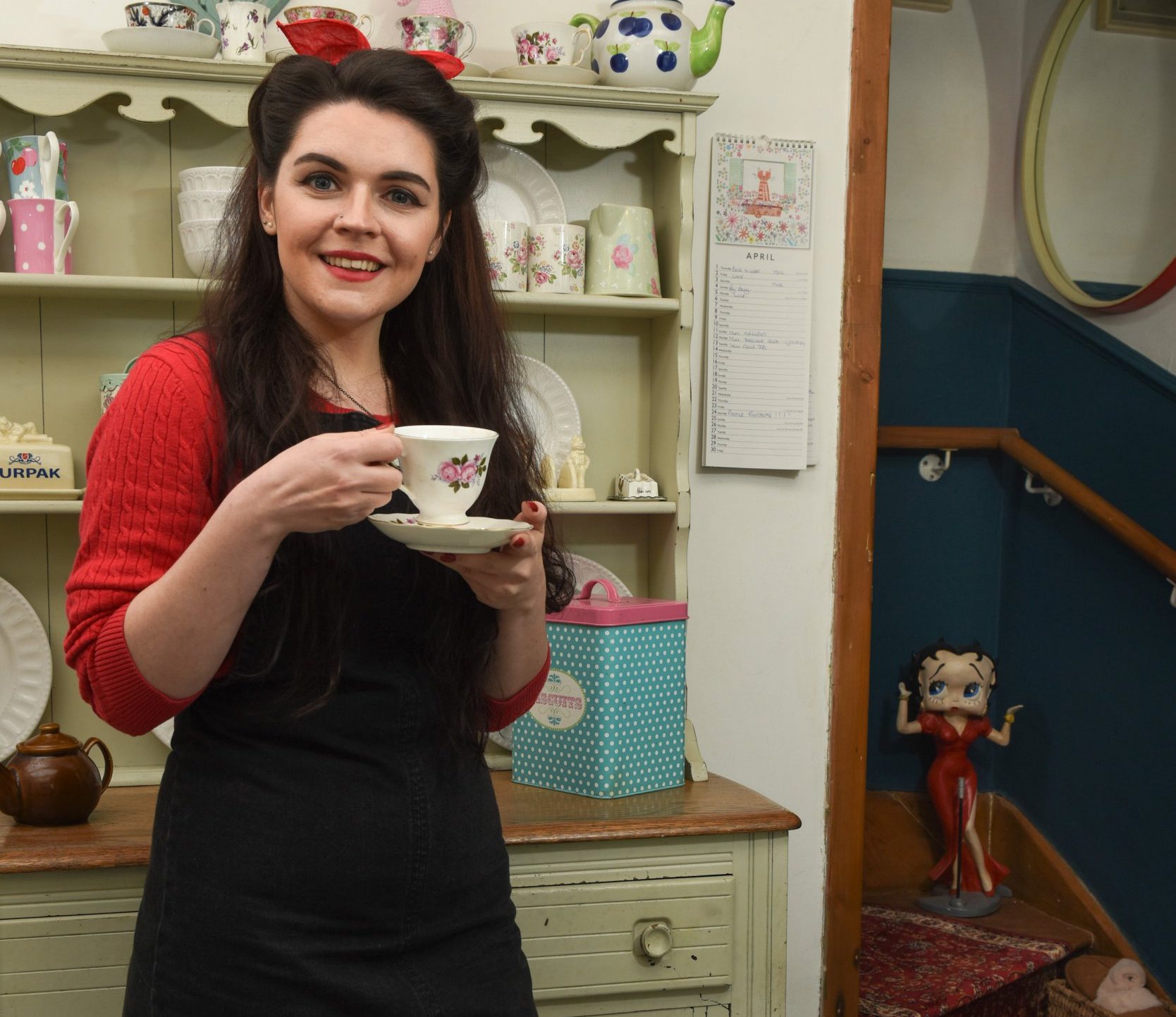 A woman who completely revamped her house to suit her vintage fashion sense has shown how she renovated the retro-looking space.

Hannah Hall, from Nottingham, bought a 1920s-era house in 2016 and decided to unearth its old charm, after copping a working 1940s gas cooker for £16 on eBay.

The medical examiners officer’s obsession with the wartime period began when her grandfather and grandmother introduced her to 1940s film and TV, fashion, and also gave her some of the antique furniture that’s helped build up her house today.

Despite still owning a TV, Hannah admits that transforming her house has helped her appreciate the simplicity of the past and she plans to continue to strip back to using antique household objects instead of reaching for technology.

Hannah said: ‘I’ve always been interested in vintage things and I get told that I’m an old head on young shoulders.

‘It’s my mum’s first buy because she’s always rented homes, so I wanted to make it extra special.

‘The theme really started to take off when we did the kitchen in a 1940s style and we loved it so much that we decided we really wanted to go with that theme throughout the house.’

She adds: ‘My nan’s taste in vintage and eccentric fashion has also inspired me to dress quirky.

‘I feel like my home is an adoption centre for vintage things. I absolutely love it but I know it’s not to everyone’s taste because it’s a massive niche.’

Hannah bought the house, built in the 1920s, from an old family friend and found that everywhere was rather beige with lots of laminate flooring, and in need of overhauling.

She said: ‘It had lost its charm a little because there were plastic cabinets in the kitchen and lots of laminated floors throughout.

‘We uncovered the original floorboards and tore off the carpet to reveal the original stairs to start bringing it back to life bit by bit.

‘Vintage items have a bit more soul than modern things and I get a kick out of finding something that might have so much story behind it.’

The main vintage aspects of Hannah’s home include the wooden floorboards, the 1940s stair carpet runner, a working rotary phone and other antique furniture, such as the stunning oak wardrobe.

But the piece de resistance is the 1940s kitchen – which is complete with black and white flooring, a whistling kettle, wooden beams and an open pantry.

Hannah said: ‘After the kitchen was redone, we went a bit mad and just started collecting different items such as a 40-year-old tin opener, vintage wallpaper and old paintings.

‘The gas cooker in the kitchen definitely comes in handy if the electricity goes out on our street because we’re still able to cook dinner!

‘It’s not what you expect when you come in and every single room has vintage touches.

‘Our family thinks the house is really quirky and is like a little time capsule. Everyone loves coming over and kicking it a little old school for a bit.’

Their vintage journey hasn’t stopped there, and the garden will be next for the wartime treatment.

Hannah says: ‘We’re still working on the house every day and we’re hoping to get a 1940s-style front door and also transform the back garden, using my grandpa’s old Raleigh bike as a flower feature.’

Check out Hannah’s home on her TikTok page.

Get in touch at [email protected]

Here’s what happened to these couples from Millionaire Matchmaker