As the long-term ramifications of 2020 continue to unfold, it’s fascinating to watch how different facets of the entertainment industry adapt, specifically to the adoption of streaming services and alternate distribution models. For some facets, little has changed. Music, for instance, has been working out how to exist primarily in virtual spaces for decades, thanks to Napster and the like. TV and film weren’t far behind, though the latter has struggled this year, both financially and, perhaps, psychologically, with the loss of physical movie theaters. But few cultural endeavors have been as fundamentally shaken as live theater, where Broadway has been shuttered since mid-March and will remain so until at least January 2021.

And while there have long been ways to experience live theater outside of the whole live thing —  PBS’ “Great Performances” has been tirelessly working a variation of this beat for nigh on 50 years — Broadway has faced criticism for creating a playground for the elite, where only the wealthiest portion of Americans can experience the greatest theater experiences.

It’s a large part of what’s been so miraculous about seeing filmed representations of popular plays and musicals released on high-profile streaming services in the past year. First, with Disney+ and cultural juggernaut “Hamilton” and now with Amazon Prime Video’s “What the Constitution Means to Me,” a one-woman show created by Heidi Schreck and directed by “A Beautiful Day in the Neighborhood” filmmaker Marielle Heller.

There is a turn, then, with Schreck at first as her 15-year-old self and then as her present self, pulling at the threads of memory, as well as the narratives we weave about our own lives. As part of the competition, contestants were encouraged to share their own relationships with the constitution and how it influenced them personally. It was something the playwright shied away from, even as a child, and soon she explains why. 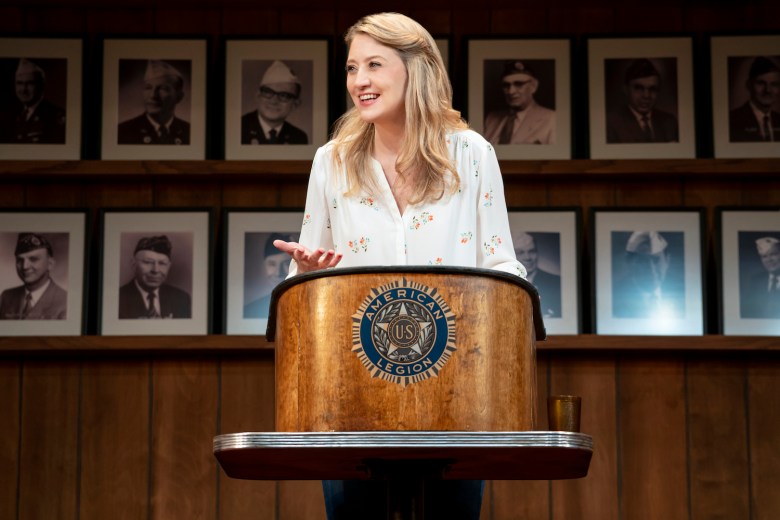 Heidi Schreck, “What the Conststution Means to Me”

The groundwork laid, Schreck begins an inspiring work of modern political discourse, detailing the failures and frustrations inherent to the document that serves as the framework of American democracy. Focused primarily on the ninth and 14th Amendments, she delves into matters of domestic violence, abortion, reproductive rights, and immigration. Schreck comes back time and again to the idea that, ultimately, the United States constitution doesn’t care about women.

So much so that the word “woman” never appears.

And yet as she delves into the history of her own family in Washington state, going back generations, Schreck is always mindful that her life as a white woman in America is full of privileges not afforded to more marginalized groups, including women of color, LGBTQIA+ and non-binary individuals, and trans women. She realizes that as difficult as life was for her grandmother and great-grandmother and great-great-grandmother and so on, that for so many other people their gender is just one factor in the atrocities visited upon them every day.

What so much of it comes down to, Schreck shares with her audience upon conferring with scholars of constitutional law, is the idea of the American constitution being full of “negative rights”, as opposed to “positive rights.” The former focuses on what the government cannot do to you — like, say, making you house soldiers in your home — and the latter on what the government can do, or what they guarantee their citizens. 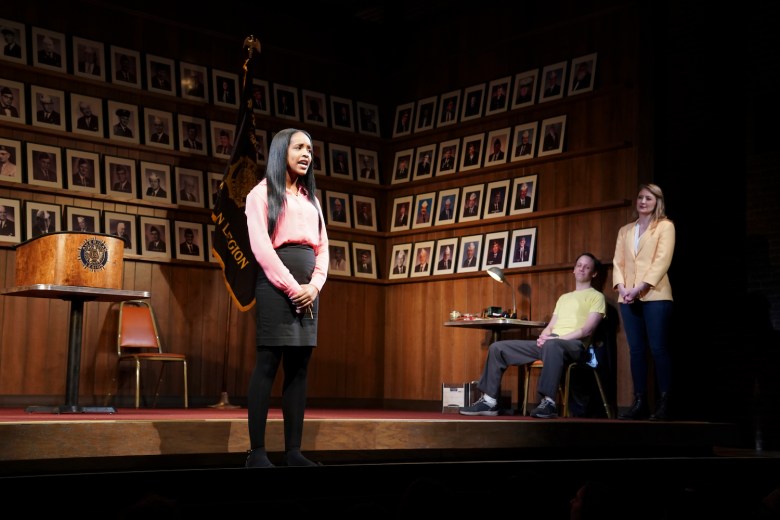 Rosdely Ciprian and Heidi Schreck, “What the Conststution Means to Me”

From it’s beginning in a mock-up of an American Legion hall to the end, which sees Schreck debating a whip-smart high school debater on whether or not the current constitution should be abolished, “Constitution” is a rallying cry, not just to action, but to emotion. It is easy to get burned out from the constant churn of news, which often seems to only be one bad thing after another. But caring is the first step toward lasting change.

And so, just weeks before what might be the most influential election in modern history, a heart-rending exploration of the roots of disfunction, in ourselves and in our country, landed on Prime Video and made a closing argument for why people should continue to care, even when the odds appear stacked against us.

It is the magic and immediacy of theater, brought directly into our homes thanks to the accessibility of streaming, an opportunity too easily lost without the fervor of directors like Heller and streamers committed to bringing audiences programming that is vital and furthers the conversation, both culturally and politically.

Here we are, on the precipice of a new era, with greater access to the fine arts than ever before and an opportunity to make actual change. Streamers, invest in art that might otherwise go unseen by vast swathes of the populace, and let’s go out there and change the world.

“What the Constitution Means To Me” is now streaming via Amazon Prime Video.