There was a lot expected of Marvel at this year’s D23 Expo.

As the chairman of Disney Studios Content Alan Bergman pointed out upon opening day two of the company’s movie panels, when D23 started, Marvel Studios had just been acquired. At the last D23, held pre-pandemic in 2019, many projects Marvel promoted ultimately struggled to get out on time amid seemingly endless production delays thanks to COVID-19. But with the upcoming “Wakanda Forever,” the sequel to 2018’s groundbreaking blockbuster “Black Panther,” finally marking the end of Marvel’s Phase 4, many anticipated Marvel would shoot for the moon — and land there.

And yet, as with yesterday’s Disney panel devoted to live-action and animation slate, it felt like there was less: fewer projects and less footage. That was even more apparent with Marvel, which had several announcements that culminated with Feige saying, “We literally don’t have anything to show you.” In the case of “Fantastic Four,” whose cast many presumed would show up at the event, Feige merely introduced director Matt Shakman (taking over for Jon Watts, who will tackle “Skeleton Crew” for Lucasfilm) as the new man behind the camera, before abruptly concluding: “And that’s it!” Judging by the crowd’s reaction, it was thought initially that he might be joking. (Yesterday had a few moments where talent faked like they were done talking only to reveal some new sneak peek or announcement.) But nope, that was genuinely “it.”

Numerous high-profile projects didn’t warrant a mention at D23 at all. There was no news of Mahershala Ali or his turn as “Blade,” in spite of an announcement that Charlie Cox and Vincent D’Onofrio were returning to the MCU f0r a “Daredevil” series. Nor was there anything about “Guardians of the Galaxy 3” or anything regarding Fox’s superhero slate; so no “Deadpool 3” yet, gang.

Why the caginess? It’s certainly a strange move, especially when yesterday the studio was emphasizing their theatrical releases alongside Disney+. Considering Disney’s past attempts to remind audiences that the movie theater is the best place to see their content, it would have been nice to showcase some high-profile film projects.

If there was one theme during this year’s Marvel panel it was Disney+, with nearly the entirety of Lucasfilm’s projects being streaming titles and several shows for Marvel announced, including “Secret Invasion” and “Echo.” It’s possibly that Disney wants to re-up the love for streaming, especially as the D23 members at the Expo were offered three-year subscriptions to Disney+ that renew in November. What better way to get them to renew their subscription than play up what they can see on the service in a year or two? 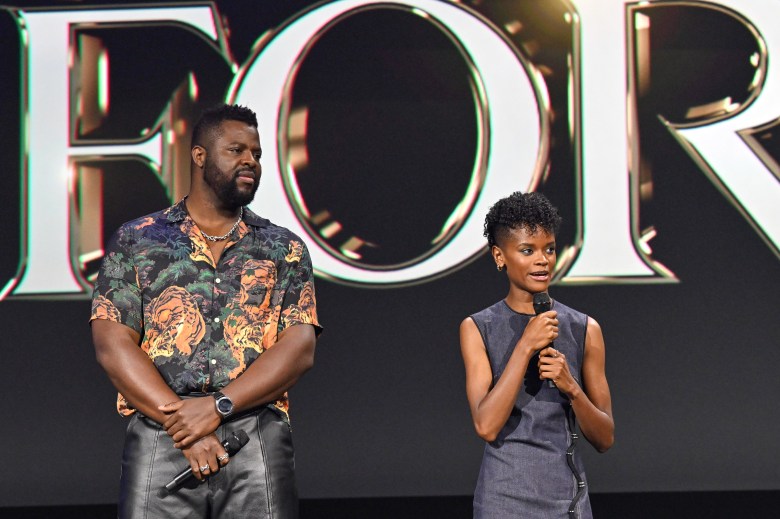 Marvel also seems keenly aware of their demographic. They don’t necessarily have to hype their upcoming projects to get their fanbase to go see them. The fans will show up no matter what. So it’s totally fine to have Sebastian Stan drop in, and Florence Pugh send a video to discuss a show that won’t even film till next year. The sheer fact that the two will be teaming up is enough to carry fans through to whenever the finished product shows up. It’s worth pointing out that several projects touted during this panel, including the second season of “Loki,” were previously announced when Marvel was at San Diego Comic-Con last July, proof that they can churn out the same info so long as there’s a little something new, in this case, a major casting announcement.

That being said, the sheer diversity of projects was interesting. Marvel is doing a Halloween special with “Werewolf By Night,” while “Secret Invasion” looks like a ’70s paranoia thriller in the vein of “Body Snatchers.” If anything, the arrival of Phase 5 gives Marvel the opportunity to not focus solely on sequels and try one-off projects or truly bizarre genre fare. The future of Marvel may seem slight now, but the sheer amount of creativity that was felt in the room was unparalleled.

The Young and the Restless spoilers for next week: Elena worries, Amanda wants answers, and a Skyle proposal