After waiting in agony to find out why Zac had been arrested on Tyler Perry’s Sistas, fans finally got the answer on Wednesday’s Season 4 midseason penultimate.

Turns out some woman named Heather from Zac’s past slapped him with back child support charges, and he had to pay nearly $40,000 in order to get out of jail. There’s just one problem: This could never happen in real life.

If you Google child support laws in the state of Georgia, paternity has to be proven first before anyone can be charged with child support negligence, much less arrested. But Tyler Perry doesn’t care about minor details like this. By having Zac arrested, there was drama and suspense and fear, and Jake got to prove himself as a good friend by paying the bill so Zac could get out of jail and explain the trumped-up charges to Fatima in person.

While all of this was going on, Pam somehow used her ghetto grapevine connections and found out the woman with the cheap wig looking for Zac was a cop. But why Karen would bother herself with Zac’s business is beyond comprehension. Seriously, Karen, the only thing you should be doing is scheduling a doctor’s appointment. Perhaps that’s why Aaron called and informed Karen that he’d scheduled an appointment on her behalf and would even pay for it. Thank you, Aaron. Thank you! 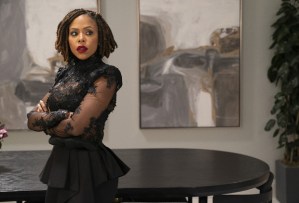 Elsewhere in Atlanta, Danni and Andi met for drinks, and Danni gave her bestie the tough-love advice she needed to hear… again. Of course, Fatima told Andi the same thing basically, but some people just like doing things the hard way. Danni told Andi she was still in love with Gary and that Gary was still in love with her, and she would probably take him back until she got fed up with his wicked ways again.

Andi didn’t like what Danni had to say, but she knew it was true. As they were talking and drinking, Preston walked into the restaurant with a date, and this frustrated Danni, who said Preston never bothered to take her anywhere nice. Andi took off early to meet up with Gary and warned Danni not to bother Preston, but she didn’t listen.

She sauntered over to the bar doing a terrible Valley girl impersonation and introduced herself to Preston’s date Kelly, who said Zac had introduced them in the past. Kelly added that Zac had introduced her to Preston, too. When Danni asked what they were talking about, Kelly revealed they were chatting about hip-hop. Danni told old girl she and Preston had been bumping and grinding a lot and then accused Preston of purposely coming to the restaurant to passive-aggressively make her jealous. Oh, Danni. 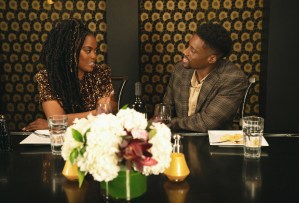 After leaving the bar, Danni went to Sabrina’s to lament and accuse Zac of hooking up Preston with various Black women to make her angry. Sabrina asked Danni why Zac would do such a thing, however Danni didn’t seem interested in reason. But why does Danni care? She didn’t want to be with Preston, right?

Danni then decided she was interested in Nate, the undercover cop from work, and Sabrina declared she was ready to check out Bayou, the rich West African from the bank. Inspired by Sabrina’s bravery, Danni texted Bayou, set up a date for her and joked about Calvin “having his panties in a bunch.” Ha!

Sabrina went on her date with Bayou, and he arranged for a private room, a tasty bottle of wine and some appetizers. The two toasted to “seeing how the date goes,” and then Calvin crashed the date acting jealous and petty.

Earlier at Maurice’s, Que broke in and tried to nakedly convince Maurice to let him live there, but Calvin put his foot down. The ploy didn’t work, but Maurice certainly was tempted, despite the fact that Que had nearly cost him his job when he robbed the bank where Maurice works.

Andi dealt with her own romantic drama in the penthouse when Robin called from his private jet and asked her out for drinks. She turned him down to meet with Gary instead, but did say she could see him the next night. Robin immediately knew Andi’s distance had something to do with Gary, but Andi lied and denied it. 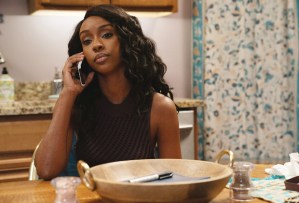 Meanwhile, busybody Karen went to Zac’s place and ran into Fatima, who asked what was up. Karen said she was waiting to talk to Zac alone and then confessed that Zac’s recent success pissed her off. Fatima was like, huh? But Karen explained it really bothered her that Zac was a better man for Fatima in a matter of weeks than the whole three years he was with her.

Fatima asked if Karen wanted Zac back, and she swore she didn’t. Instead, Karen admitted she wished she weren’t jealous and could be happy for Zac and Fatima. Touched by Karen’s honesty, Fatima revealed that her ex was better off with the woman he married and that sometimes folks just don’t fit. Fatima went inside to get Zac for Karen, but Zac wasn’t home. 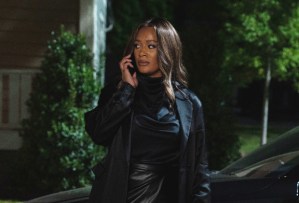 The contractor revealed Zac had been arrested hours earlier, but added that he didn’t know why. Fatima thanked the guy and told Karen he wasn’t home after all. Karen didn’t believe her and drove off in a funky mood, and Fatima called Hayden to ask if he had anything to do with Zac’s arrest.

Hayden warned Fatima not to threaten him and said he didn’t have anything to with Zac’s arrest, but Fatima thought he was lying and went to get her bat. Oh snap!

What did you think of the Season 4 midseason penultimate of Sistas? Are you worried about Hayden’s safety, now that Fatima is swinging her bat? What do you think will happen to Zac? Drop your thoughts in the comments.