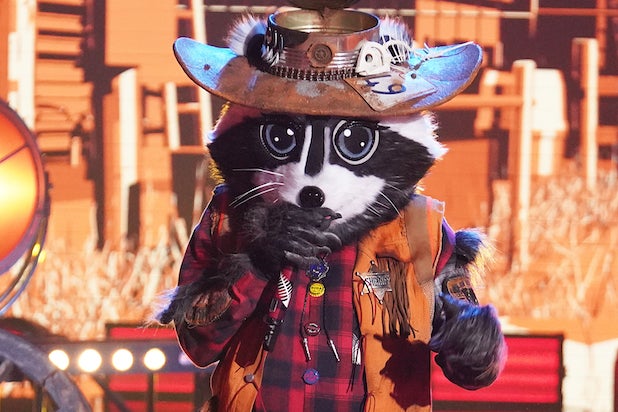 (Warning: This post contains spoilers for Wednesday’s “The Masked Singer.”)

“The Masked Singer” featured its much-anticipated first “Wildcard” round on this week’s episode of Season 5, when surprise contestant Orca came in and stole the show — literally. That celeb joined in the fun at the last minute, taking away the slot of Group A competitor Raccoon, who was eliminated from the competition and unmasked at the end of the episode.

Following last week’s introduction of Group B — which now consists of Grandpa Monster, Chameleon, Black Swan and Piglet, after Phoenix was cut from the lineup and revealed to be Caitlyn Jenner — Group A contestants Russian Doll, Snail, Raccoon, Seashell and Porcupine (aka Robopine) took the stage again.

They each gave their second performances in front of judges Jenny McCarthy, Ken Jeong, Robin Thicke and Nicole Scherzinger, along with guest host Niecy Nash (filling in for Nick Cannon, who is recovering from COVID-19) and guest judge Joel McHale. Once they were done, the “Wildcard” round began, with surprise contestant Orca making his grand entrance by singing Twisted Sister’s “We’re Not Gonna Take It.”

Then it was time for the judges and at-home audience to cast their votes for Wednesday’s top contestant.

The performer who came out on the bottom was Raccoon, who sang “Ring of Fire” by Johnny Cash. Before the Raccoon was unmasked, Thicke guessed the contestant was Tony Danza (and so did McHale), Scherzinger picked Sylvester Stallone, Jeong said Danny DeVito and McCarthy thought Gary Busey. The Raccoon turned out to be actor Danny Trejo.

“The Masked Singer” Season 5 began with 10 scheduled contestants, broken into two groups. After last week’s elimination of Jenner’s Phoenix and the premiere’s cut of Snail, who turned out to be Kermit the Frog, there are now eight remaining contestants, due to the fact that Orca took over Raccoon’s slot in Group A via Wednesday’s wildcard round.

“The Masked Singer” airs Wednesdays at 8/7c on Fox.