Beau Garrett, a series regular on Season 1 of ABC’s The Good Doctor, is set to reprise her role as Jessica Preston in the medical drama’s two-part Season 4 premiere (airing Monday, Nov. 2 at 10/9c).

It remains unclear if Garrett’s return will extend beyond next month’s opener. Her encore comes more than two years after her abrupt departure; her last episode aired in March 2018.

Garrett’s exit came as something of a surprise when it was first announced back in September 2018. Jessica was best friends with Glassman’s deceased daughter Maddie. She stood by Glassman’s side when he first discovered he had brain cancer in Season 1, but was not present (or even mentioned) when the former hospital head underwent multiple surgeries and chemotherapy throughout Season 2. 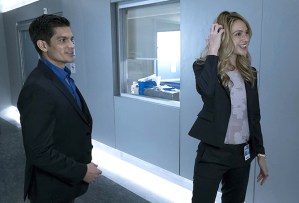 Glassman was Jessica’s only connection to The Good Doctor‘s core group of characters. She ended her long-term relationship with Dr. Neil Melendez (Nicholas Gonzalez) midway through Season 1, after he made clear his desire to start a family, which she did not share. Her return comes in the immediate aftermath of Melendez’s shocking death in the Season 3 finale.

While we wait to see how Jessica factors into the COVID-themed premiere, read on for the official synopsis for “Frontline,” which also teases Shaun and Lea’s socially distanced relationship, Park’s potential move and Morgan’s new role within the hospital:

Dr. Shaun Murphy treats a patient with an illness that is not only unpredictable in nature, but also unlike anything he or the team at San Jose St. Bonaventure has ever seen before. As safety protocols and quarantines increase due to the global pandemic, Lea and Shaun’s new relationship will become tested; and Dr. Alex Park gets ready to move back to Phoenix, Arizona, to be closer to his family. Meanwhile, Dr. Morgan Reznick navigates her way around the clinic following her departure from the surgery team and unknowingly puts herself and several members of the staff in danger. Finally, Dr. Claire Brown continues to work through her grief, still reeling from the sudden death of Dr. Neil Melendez.

Are you surprised by Garrett’s return to The Good Doctor? And how do you think Jessica will factor into the premiere?

'RHONY': Leah McSweeney Blasts Heather Thomson for 'Spinning Lies' About Why She Quit the Show

Spoilers: Evil Leo threatens Jack in EastEnders as he makes a shocking arrest