One of the many unfortunate consequences of the Trump era, though admittedly low on the list, is the complete flattening of anything resembling artful critical discourse. Art, comedy, novels, movies — mediums that exist to help us make sense of the world — fell short of meaningful critique in response Trumpism’s horrifying and simplistic rhetoric. Since ignorance can only be met with similarly thick-headed rebukes, perhaps the gun-toting, anti-racist revenge fantasy of “The Forever Purge” is the only movie that has any chance of reaching across the aisle — an oft-touted but futile hope in post-Trump America.

The fifth entry in the grimly provocative franchise created by James DeMonaco for horror mainstay Blumhouse Productions, “The Forever Purge” continues the saga with an uprising of renegade purgers who take a government sanctioned 12-hour crime spree to its extreme conclusion, breaking the rules to wreak havoc on the entire country in the name of purity. There can be no doubt about the racism motivating the forever purgers. “Help us purify this nation once and for all,” says one hooded goon, before getting his face blown off.

The movie’s point of view is abundantly clear, director Everardo Valerio Gout and DeMonaco’s script make sure the racists are the obvious bad guys (the violent ones, at least). Their stance on gun control seems fairly clear, as well, with newscasters calling the purge “the national holiday celebrating our American freedom” shortly before getting shot in the head. There’s even one scene in which the purge ringleader calls his wife “mother,” a not-so-thinly-veiled Mike Pence reference if ever there was one.

The action opens with one migration and ends with another, one of many unsubtle but nonetheless satisfying moments of poetic justice. Having recently arrived in Texas, married couple Juan (Tenoch Huerta) and Adela (Ana de la Reguera) have settled into menial jobs, Juan as a ranchhand and Adela at a meat-packing plant. An early scene shows Juan taming a wild horse by singing softly in Spanish, dancing dangerously close to “magical person of color” territory. After showing up his boss Dylan (Josh Lucas), whom Juan suspects doesn’t like Mexicans, he returns home to hide from the Purge with Adela. While Dylan and his lily-white family hunker down in their maximum security-equipped ranch home, Juan and Adela must bribe their way to safety, packing tightly into a group safe house with other immigrants. 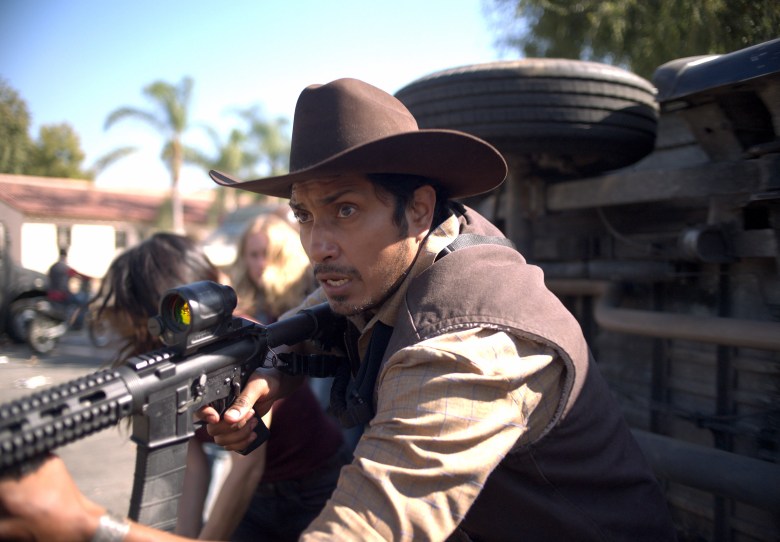 Tenoch Huerta in “The Forever Purge”

Believing themselves safe after the official 12-hour purge is declared over, they come out of hiding and go about their lives, carcasses and blood stains punctuating their commutes. But when Juan arrives at the ranch, he finds his boss and his family bound and gagged, held hostage by a disgruntled worker using the forever purge to exact revenge on his rich overlords. After valiantly saving the day, Juan and his buddy join ranks with Dylan and his family in their big rig and set off to find Adela. With this mixed motley crew assembled, suddenly their fates are joined in their battle against the purgers.

Juan and Adela are the heart of the movie, sealed by Huerta and de la Reguera, whose tender connection and strong performances carry the film. Both are compelling in their own ways: Huerta as the strong, silent type reluctant to assimilate, de la Reguera as the bold resistance fighter and surprisingly deft markswoman. It’s good that they both survive, though so do all of their white counterparts (no such luck for Juan’s buddy). 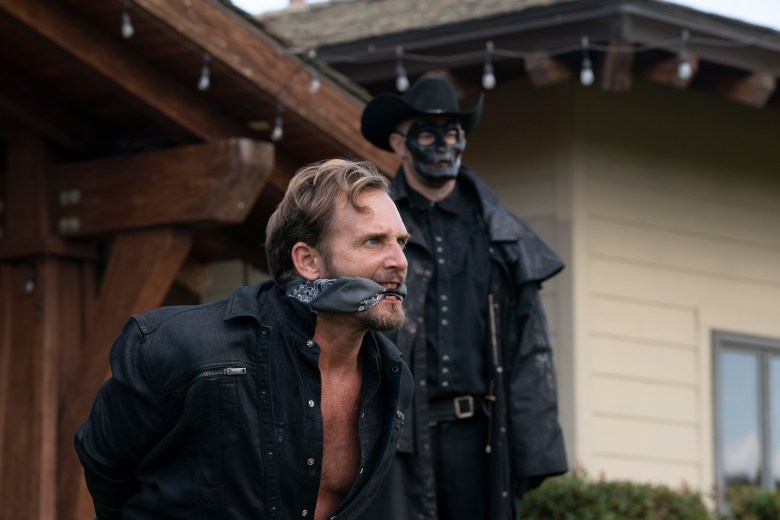 Josh Lucas in “The Forever Purge”

For a so-called horror movie with a fairly disturbing presence, “The Forever Purge” spares most of its main characters from death. Killing off one of three so-called “good” white people in service to the cause might upset the tightrope walk required to reach across the aisle, but it massively defangs a movie that has no qualms killing unnamed characters left and right. In that way, “The Forever Purge” feels more like an action flick than a horror film, bearing much more resemblance to “Mad Max: Fury Road” than the “Saw” movies.

The violence, while pervasive, does not feel gratuitous. Each kill is quick and to the point, and the camera never lingers too long on the flesh-torn wreckage. The audience is mercifully spared watching any characters of color suffer; instead getting a cheer-worthy cheesy one-liner before Juan puts an end to mutton chop Mike Pence. The group’s migration back to Mexico is narrated with punditry about “these American dreamers” who sought safety from American unrest across the wall. It’s not a subtle bludgeoning, but hopefully it gets through to someone.

'Dance Moms': Christi Lukasiak Jokes 'Some' of Her Former Castmates Are 'Dead' to Her in Viral TikTok