The first season of “The F Word: A Foster-to-Adopt Story” was all about preparing to foster a child, the countless considerations that go into such a big decision, and the challenges of navigating the system as a queer couple. The short form series, released in 2017 and subsequently nominated for a Gotham Award, was uncommonly personal, exceedingly charming, and somehow turned a complicated topic into a contemporary family comedy. At its heart were filmmaker Nicole Opper, who now goes by Nico, and their partner Kristan Cassady, whose charming banter and committed partnership provided a refreshing portrait of a loving queer couple living in San Francisco. At season’s end, they were about to meet their baby for the first time. In Season 2, a third character has entered the picture: Their adorable baby J.

The second season of the docu-series, which finished airing on Soul Pancake last week, takes a broader approach to the topic of foster-to-adopt. Opper and Cassady (also a producer on the series), bring in voices with from all sides of the process, from adult adoptees to parents who once lost custody of their children. Throughout these sometimes uncomfortable interviews, “The F Word” is never afraid to share perspectives that question the very existence of the system — even down to amending the title of their little show. It’s an important evolution in the growth of the series, and in the couple’s journey as parents, but it was not without its challenges.

“We felt a deep responsibility to get those outside interviews, but in the edit room we often felt completely overwhelmed by the task of cutting them in,” Opper told IndieWire over email. “We’d start with the transcript, selecting the gems from each interview, but then inevitably those would rarely fit into the narrow confines of the story we were telling. … When we take a breather from the painful [Child Protective Services] stories and cut to a photo montage of our kid loving on our new puppy, we needed that sequence in the edit room as much as the viewer (maybe more?)” 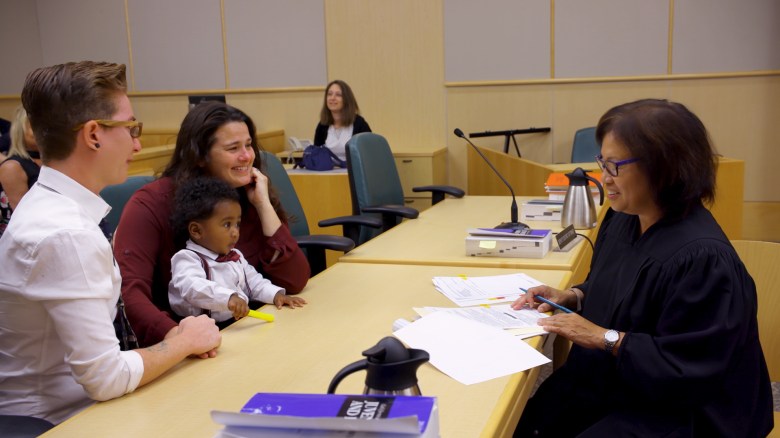 With such an impressive breadth of interviews, balancing dense information with the more joyous family moments became tricky. What makes “The F Word” so much more compelling than a straightforward explainer docu-series is the relationship between Opper and Cassady, and the vulnerability and humor they both reveal.

“We tried to lay some ground rules so the series wouldn’t mess with our marriage, (i.e. no series talk in bed or over dinner) but most of the time I broke the rules and she rolled with it,” wrote Opper. “Kristan is a natural on camera, she doesn’t jump into a performative mode and try to project a certain image, the way I do, and most people I know do.”

Opper has made two feature documentaries, runs the BAVC National MediaMaker Fellowship for documentary filmmakers, and is an assistant professor of film at Santa Clara University. By their own admission, “The F Word” was “a labor of love and an underdog from the start.” Very few web series reach the heights of a “Broad City” or “High Maintenance,” but it is still a vital space where underrepresented filmmakers can get their feet wet and the advent of digital series has been a boon for queer storytelling in particular.

“In the web space, we make the rules,” Opper said. “We don’t wait until someone gives us permission. We get to move away from mainstream, ‘homonormative’ storytelling. My favorite queer series are all pushing the boundaries of what queer even means, and looking at underrepresented communities like the queer women and nonbinary folks of color in ‘195 Lewis,’ or the hilarious stars of ‘Dinette,’ or the delightful weirdos of ‘The Gay and Wondrous Life of Caleb Gallo.’”

In addition to the creative freedom it afforded, the short format provided an approachable access point into what might otherwise be a potentially alienating or intimidating topic for audiences.

“I had a dream that people who would never sit down to watch a 90 minute documentary on adoption and foster care would stumble upon this unexpectedly and give me 10 minutes of their time,” Opper said. “And then maybe they’d watch the next one, and the next one, and later I’d get a message in my inbox letting me know they were now signing up to be foster parents. That has actually happened, but only six times.”

Check out the first episode of “The F Word: A Foster-to-Adopt Story” Season 2 below, or on the series’ website.

Home Economics: Did We Just Watch the Series Finale? (We Better Not Have)