The sprawling “Conjuring” cinematic universe has never shied away from creatively questionable spin-offs — this is, after all, the franchise that built a film around a possessed doll, and another about demonic nun who had appeared in another sequel before getting her own franchise. Those gambles haven’t always paid off, but the central series has remained a high point in modern horror. With the third film in the “Conjuring” series, however, the crown jewel is loose in its setting, thanks to a series of choices that only serve to drive the franchise away from what made it all so chilling to begin with.

“The Conjuring: The Devil Made Me Do It” starts strong, kicking off with the sort of haunted-house possession story that made both “The Conjuring” and “The Conjuring 2” so nerve-shredding. It’s the summer of 1981, and the Glatzel family is weeks into a horror that only paranormal investigators Ed (Patrick Wilson) and Lorraine Warren (Vera Farmiga) can address. Mop-topped David Glatzel (Julian Hilliard) has been possessed by something, an evil entity that delights in torturing the sweet kiddo and tearing apart the Glatzels’ new Connecticut home in equal measure.

Like its predecessors, “The Devil Made Me Do It” approaches demonic possession as, if not irrefutably “real,” at least something the Warrens believe in wholeheartedly, and thus something they are able to battle back through their years of hard-won experience and education. Clearly, something horrible is happening to David, and as director Michael Chaves — taking over from original series director James Wan after making his debut with maligned spin-off “The Curse of La Llorona” — plunges the audience, the Warrens, and the Glatzels into the terror. There’s no time to worry about the facts: David contorts, David twists, David screams out in horror, all as his family and the Warrens do their literal damnedest to free him.

The first two “Conjuring” films tread similar ground: intimate, boxed-in haunted house stories about families driven to madness, and that “The Devil Made Me Do It” opens to indicate that more of the same is on the way. Unfortunately, this entry has far more on its mind, and screenwriter David Leslie Johnson-McGoldrick (“The Conjuring 2,” “Orphan”) soon turns to the real story at the film’s heart: the horrible stuff that happened after David’s possession. 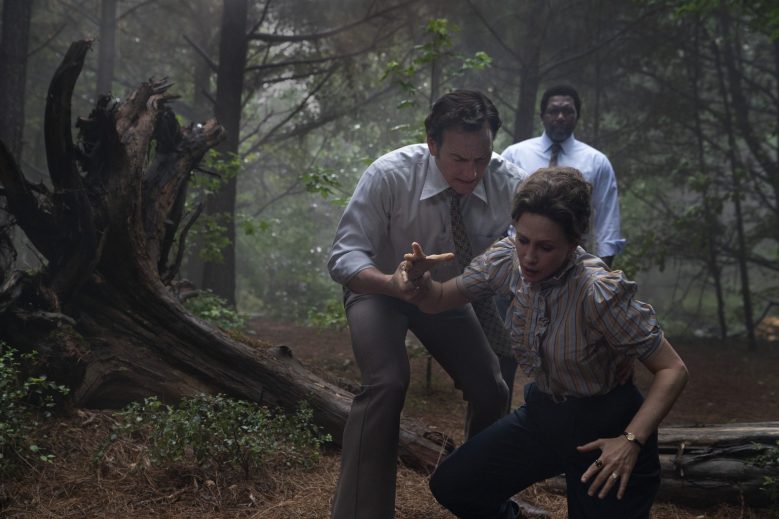 “The Conjuring: The Devil Made Me Do It”

As with the previous two features, “The Devil Made Me Do It” is based on a true story that entangled the real-life Warrens: This one was the horrific murder of Alan Bono some months after David was presumably freed from his demonic captor. In the midst of the film’s opening sequence, Chaves and Johnson-McGoldrick indicate that this particular possession is one of the worst the Warrens have ever seen. The impact on the duo is profound, as Ed suffers physically and medium Lorraine is suddenly struck by terrible visions. Eventually, it seems, they do free David, but only after Arne (Ruairi O’Connor), the boyfriend of his older sister Debbie (Sarah Catherine Hook), all but begs the entity to leave the kid and take him instead.

Be careful what you wish for. Just as the Glatzels begin piecing their lives back together (and an ill Ed gets, literally, back on his feet), Arne starts suffering from his own visions, turning sallow and sweaty, unable to keep his desires (or the entity’s desires?) at bay for too long. Soon enough, he’s offed Debbie’s demented boss, and the Warrens must return to help argue his case on the basis that he was possessed when the murder was committed. If this sounds complicated, it is, making for a messy and stilted first act that switches between time, place, and perspective with little finesse, muddling story and burying great scares along the way.

Farmiga and Wilson, who add incredible human emotion and dimension to their roles, are as good as ever, nearly making up for the lack of human drama elsewhere. Without another family to pin the chills and thrills on — like the Perrons in the first film, or the Hodgsons in the second — the Warrens must do the emotional heavy lifting. That’s fine: Ed and Lorraine are enthralling characters, and if “The Devil Made Me Do It” threatens to orient itself around their love story first and an awkwardly crafted villain second, there are worse choices to be made. Unfortunately, “The Devil Made Me Do It” starts making those choices, too. 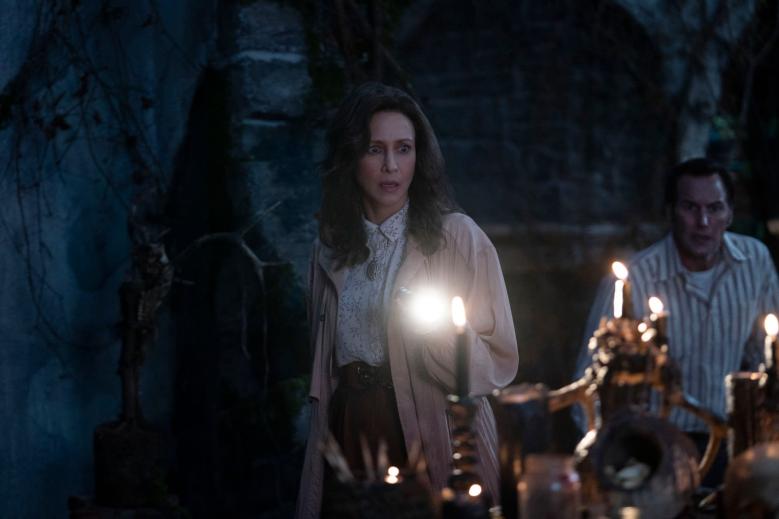 “The Conjuring: The Devil Made Me Do It”

Without the ballast of a central location and a single source of evil, Ed and Lorraine are forced on the road to pursue all manner of red herrings, obvious baddies, and at least one twisted subplot that doesn’t attempt to be rooted in anything remotely realistic. The journey takes the duo, plus an ailing Arne, through creepy locales, ranging from a dimly lit prison infirmary to the grimmest funeral home in America. It’s all so obviously scary that it renders them boring.

A handful of smart scares pop up, including a flashback involving little David and a very, very evil waterbed, as well as a final-act freakout that sees Farmiga play against herself. However, the spine-tingling slow burn sequences that made the first two films so scary are gone, replaced by procedure and garbled mythology. Bring back the creepy doll, at least she’s got clear-cut motivation! (She’s fine, she’s got her own franchise anyway.)

Three films into this series (and eight into the overall “Conjuring” franchise), it’s not shocking that creative wells are starting to run a little dry, though that doesn’t lessen the sting of this particular disappointment. The “Conjuring” franchise started with well-tread stories — hell, the Warrens’ cases have inspired scads of other films and series — told with enough craft and care to make them critical and commercial darlings. The scariest thing about “The Devil Made Me Do It” is the possibility that it will set the stage for more of this, and less of what made the franchise so compelling in the first place.

Warner Bros. will release “The Conjuring: The Devil Made Me Do It” in theaters and on HBO Max on Friday, June 4.

As new movies open in theaters during the COVID-19 pandemic, IndieWire will continue to review them whenever possible. We encourage readers to follow the safety precautions provided by CDC and health authorities. Additionally, our coverage will provide alternative viewing options whenever they are available.