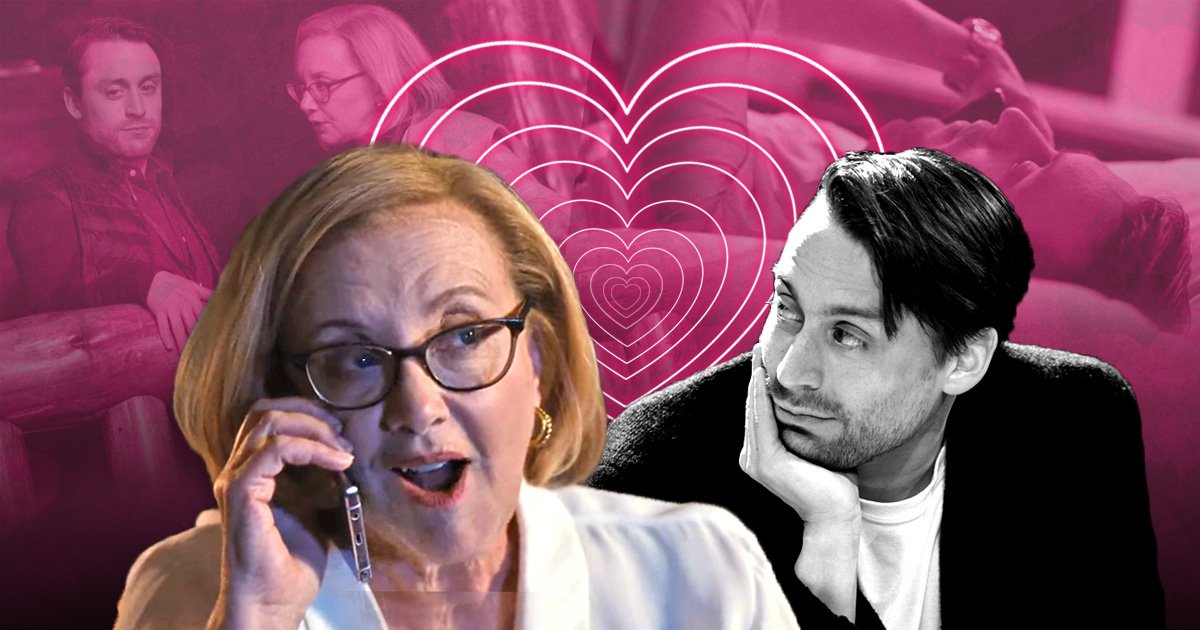 Succession’s Gerri Kellman and Roman Roy’s volcanic hot chemistry might be the sexiest will-they-or-won’t-they on television, but their spicy romance almost never happened at all.

Season 3 of the acclaimed HBO show kicked off on Monday, with Kieran Culkin’s Roman attempting to turn up the temperature by filthily talking Gerri into a romp as they sat alone together with a king-sized bed just in eyeshot.

Although Gerri (played by J Smith-Cameron) shot down his advances, fans might never have been gifted these spicy scenes if it hadn’t been for a moment of improv. Yes, really.

Metro.co.uk exclusively caught up with Smith-Cameron who revealed that the writers hadn’t initially written Gerri and Roman’s flirtatious relationship into the script.

‘The whole Gerri and Roman romance had come from one of those [improvisation moments],’ Smith-Cameron tells us. ‘Kieran and I have been friends for years and we had this mock flirtation that we would do anyway off camera.

‘At the end of season one, we had this little scene that was at a bar at the wedding reception. I don’t remember what we said but we did this quasi flirtatious little repartee and it was a little saucy.

‘Then I walked away and apparently I looked back at him, checked him out, and once I turned around, just magically, he turned around to check me out. I remember the writers laughing in the next room watching it on the monitors.’

Smith-Cameron wasn’t made aware that her relationship with Roman would be oozing with sexual tension until the season two read through. Co-star Alan Ruck, who plays Connor Roy, delighted in telling her the news. ‘He goes, “you’re going to be Roman’s love interest this season!” and I just laughed,’ she remembers.

‘We were shooting season two and there was a scene where Gerri and Roman are together in Japan and they’re looking at Kendall’s press conference on an iPad,’ Smith-Cameron continues.

At that point, when Roman pleasures himself as Gerri talks to him on the phone, Smith-Cameron says she didn’t know whether the writers knew if Gerri and Roman’s romance would continue. ‘I still don’t know if they know to what degree [it will go on],’ she adds.

So, what can viewers expect from the power couple in this series? ‘Well, first of all, my job as Gerri is to keep it on the rails, particularly in season three because I become quite no-nonsense.

‘Roman will say something really forward and I’ll just ignore it and carry on with the business meeting I’m trying to have. I think I’m trying to train that relationship into a business direction.’

‘However, I think the rapport between the two characters is sort of undeniable,’ she continues.

‘There’s a sort of undertone and I do feel that there’s a real affection or a bond happening.’

Whether or not viewers will see Gerri and Roman bone might be out of the question though. ‘They spar,’ she teases. ‘I’m a foil for him, I’m always saying no. I also think he’d be too chicken to do anything.

‘She’s always trying to walk this line… You wouldn’t want them to consummate because you wouldn’t have any sexual tension.’

Succession airs on Sky Atlantic and NOW in the UK with new episodes airing Mondays.