You can watch the full, hilarious test in the video above.

Obviously a physical exam isn’t thorough unless the entire body is checked, so that’s exactly what Colbert did next. Hooked up to a leash, Rudd obediently hopped on a table as if at a dog show. His most impressive trick? Following Colbert around while walking backwards, showing off his butt.

Finally, there was a “sexy” photo shoot, in which Rudd had to prove his allure in a series of insane hypotheticals posed by Colbert (who was obviously the photographer). In the end, though, the very official“Late Show with Stephen Colbert” Sexiness Research Institute found that Rudd actually tested negative for sexy.

Naturally, Rudd accepted his results with grace, ready to head home. But as it turns out, humility was just the final test of sexiness, and Rudd passed with flying colors, earning him People’s coveted title.

Oh, and for what it’s worth, this all came after a more formal interview process, which you can watch here. 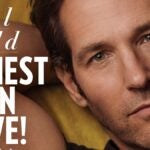