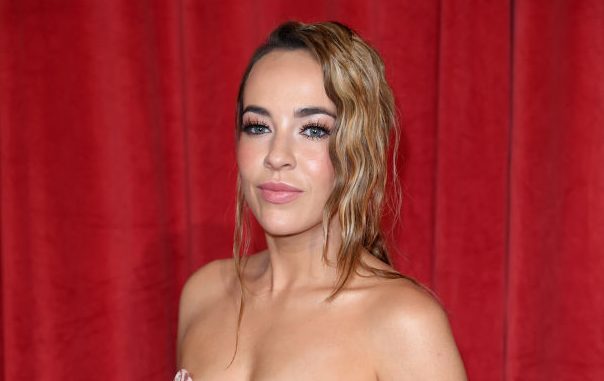 Stephanie Davis has suffered a miscarriage while pregnant with her second child, her first with boyfriend Oliver.

The former Hollyoaks star shared the news on Instagram after going quiet on the social media site for a week.

Stephanie and Oliver had only told close friends and family they were expecting as they ‘wanted to wait till the 12 weeks safety mark’, however she began experiencing ‘pains’ and was admitted to hospital where they were given the sad news.

On Instagram the actress shared a video she had made after finding out she was pregnant, including the sweet moment she surprised Oliver with her positive pregnancy test and a pair of baby boots.

The Big Brother star, who is already mum to son Caben-Albi, confessed she debated whether to share her loss.

She began: ‘Is it no ones business, or should I share my sadness or just keep It in and feel sad and alone like I do. As my followers I guess you know me pretty well. It was in fact your messages about my bad skin change, my heavy curry intake, random food and hormones that made me check… I was pregnant.

‘We only told close friends and family as wanted to wait till the 12 weeks safety mark even though I thought of course it would all be fine. I was so happy. Unfortunately I started getting pains and was under the hospital were they were keeping a close eye on on me.

‘Scans and lots of bloods later I had the dreaded phone call of the hospital saying that my levels were dropping drastically, and sadly my pregnancy is no more. Then it was just the waiting game to start bleeding and lose what I dreamt about and was so happy about.

‘I finally thought I had my happy ending. That’s why I’ve been quiet and today the dreaded pains and bleeding has begun, it makes it all real now that it’s over 😢 I made this video that Ol and Cath actually had a good laugh at at the time when my hormes were all over the place, it gave them a good laugh watching me watch it on repeat sobbing with my hormones watching it over and over lol, but I loved it.

‘My hormones were all over the place while I sat and re watched it over and over crying happy tears. I wanted to end the video telling Caben he was going to have a brother or sister but we never got that far…’

Stephanie continued: ‘I was so excited to finally get to enjoy every second of my pregnancy and it be a happy thing, I never thought I’d have the strength to go through another pregnancy as with Caben it was a horrific traumatic time, but I guess you heal and I couldn’t wait to have my happy ever after with Oliver and Caben and our baby.

‘I know one day I’ll get my happy ending but for now I just have to get through this. Sending all my love, Steph x.’

Sands UK is a stillbirth and neonatal death charity, which works to reduce the number of babies dying and to ensure that those affected by the loss of a baby receives the best possible care for as long as they need it.

The charity aims to better understand the causes of baby deaths and works with governments and other organisations to raise awareness of issues surrounding baby loss.

Sands provides bereavement support at a local and national level.