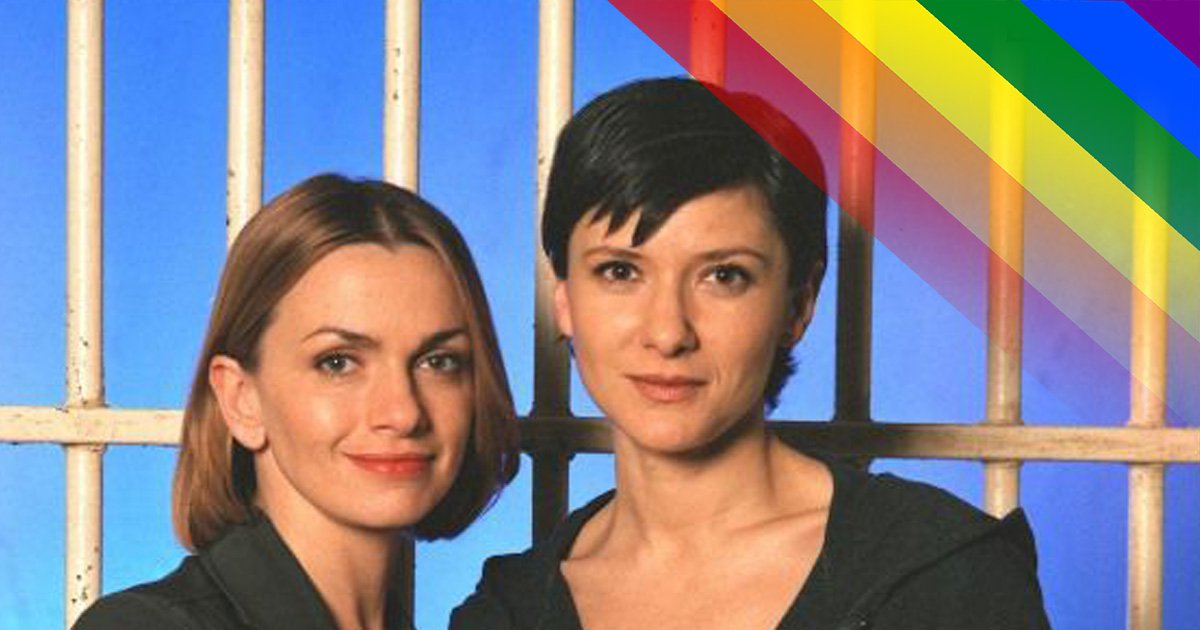 It was a love story that touched millions – cult prison drama Bad Girls explored many important storylines but the one which stands the test of time is the relationship between Helen Stewart and Nikki Wade.

The pair overcame many obstacles and, unlike the representation of lesbian relationships on TV, there was no cheating and it didn’t end in death – we have all heard of the depressing ‘Kill Your Gays’ trope which shows tend to use for emotional impact and shock value, missing the fact that those who are either out or want to come out need some positive representation.

Simone Lahbib, best known, despite her many roles since, as Helen admits that at the time, no one realised on the show what a legacy the story would have – but she knew from the beginning that the pair deserved a happy ending and she wanted to see it through.

She told Metro.co.uk: ‘That’s an overriding thing that we hear from women who invested in the story. A lot of gay women who followed it, back in the day they were watching the L Word and so on. Women in long term relationships didn’t feel represented – gay women were always shown as bed hopping and promiscuous. So it was nice to have an actual love story.

‘We didn’t realise at the time, how much of an impact the story had – the first Bad Girls Reunion was such an emotional event. People told us face to face about their stories. We’ve done other work but this TV show is still so important to people – and we understand why now. Some people said the storyline saved their life and young people feeling lost, they finally felt represented. There were many tears and emotions and them being able to share that was so impactful. I finally really got why Helen and Nikki were so important to fans.’

And the legacy continues with fans young and old attending conventions, sharing their love online, bingeing their boxsets and campaigning for a resurrection.

Simone smiled: ‘The love story element has prevailed and there were so many strong characters. It’s still after all this time the longest running same sex love story of all time.

‘Styling aside but it stands the test of time! The characters and stories and the issues that were discussed – it covered a lot of women’s issues in that prison setting. It meant a lot to women and is still picking up new followers now. There’s another Reunion coming up and one of the TV channels is showing the series from the start – I wonder if we influenced that as there’s still a clear interest.’

Despite not realising the fan response due to the absence of social media at the time, Simone knew in her gut that she wanted – as did Mandana Jones – to finish the story from start to finish.

She explained: ‘I did understand instinctively that I had to stay and finish off the story. There was a point when Helen may not have returned after the first season but they brought Helen back in a whole new role.

‘I did another couple of years to finish the story – I just knew a happy ending was just so important. When you’re in the part, you connect with the story – it was also important to me as a person. I am so glad to have seen it through.

‘I think the story was underestimated at first so I am glad they saw it through as all these years on, it means so so much to people.’

And Simone has so many fond memories of her time on the show – with recent Reunion events even allowing her to reconnect with Mandana and build what she believes is an even stronger friendship than they originally had.

‘The cast that did the first three, I have made lifelong friends but ironically Mandana and I kind of lost touch until the Bad Girls Reunion and we re-connected over that. We call one another up and just rekindled a friendship – she is an amazing person, I love her as a person, she is so bright, interesting and has such a big heart. We had our kids two weeks apart, our lives are parallel!

‘Her son was coming to my acting classes and Mandana started teaching them. Alicya Eyo and Debra Stepehnson are people I was close friends too. Sharon Duncan-Brewster, she’s amazing. My friend thinks I have a girl crush on her because I don’t stop banging on about her. Debra in her one person show, I felt like a proper fan – she carried that show, taking off Shirley Bassey. She is amazing and she is totally hilarious as well. She is very politically switched on.

And Simone believes the love story and the happy, positive ending for Helen and Nikki makes the storyline one of the most enduring for the LGBT community of all time.

‘It was the right time to end the story as if we had stayed they would have split them up and all the rest of it,’ she mused. ‘There’s still a lot of people talking about a re-boot for Bad Girls. It’s nice there’s still such an interest – one never knows!’

So long as Helen and Nikki stay together, sign us up for that!