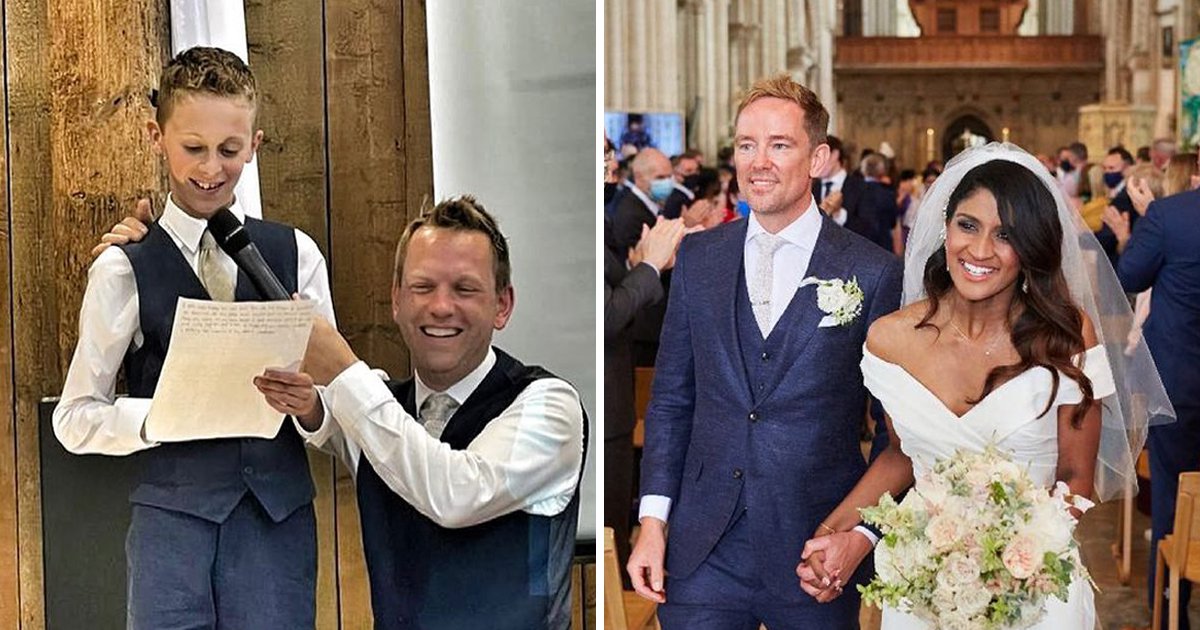 Simon Thomas had his favourite little man by his side as he married Derrina Jeb, as his son Ethan acted as best man.

The former Sky Sports presenter tied the knot with girlfriend Derrina more than three years after the death of his first wife, Gemma, who died from leukaemia in 2017.

In the latest photos from the nuptials, Simon’s son Ethan – who he shared with Gemma – looked smart in a waistcoat and tie at the wedding reception and read from a sheet of paper while delivering his best man speech.

Adorably, Ethan, 11, stood on a chair as his dad held the microphone for him and supportively placed one hand on the youngster’s shoulder, smiling proudly. Behind them, a photo of Simon and Derrina was projected onto a screen.

He also shared a new photo of him kissing his bride on the forehead during an intimate moment in a hallway at Norwich Cathedral where the ceremony was held.

Simon, 48, announced they had married with a sweet photo of them holding hands and walking down the aisle as husband and wife, moments after saying their ‘I dos’.

Among the congratulatory messages, former Blue Peter presenter Angellica Bell revealed she was in attendance and commented: ‘Thank you for letting us share your special day. ❤️.’

Simon was previously married to first wife Gemma until her death in 2017 at the age of 40.

Symptoms of the disease include unusual bruising and bleeding, feeling tired, losing weight and breathlessness.

Simon opened up about his experience of dealing with grief in a book called Love, Interrupted: Navigating Grief One Day At A Time, in which he described the guilt he felt after Gemma’s sudden death for not insisting on medical help sooner for her.

The ex-Blue Peter host went public with his and Derrina’s relationship in March 2019 when they attended Cheltenham Festival together.

Derrina appears to have developed a close relationship with Simon’s son Ethan, as he often shares photos of the pair spending quality time together.

Stacey Solomon says I look sexy doing the windows to make me clean them all, says Joe Swash

Denise Richards was on the 90210 reboot: RHOBH star has fans freaking out