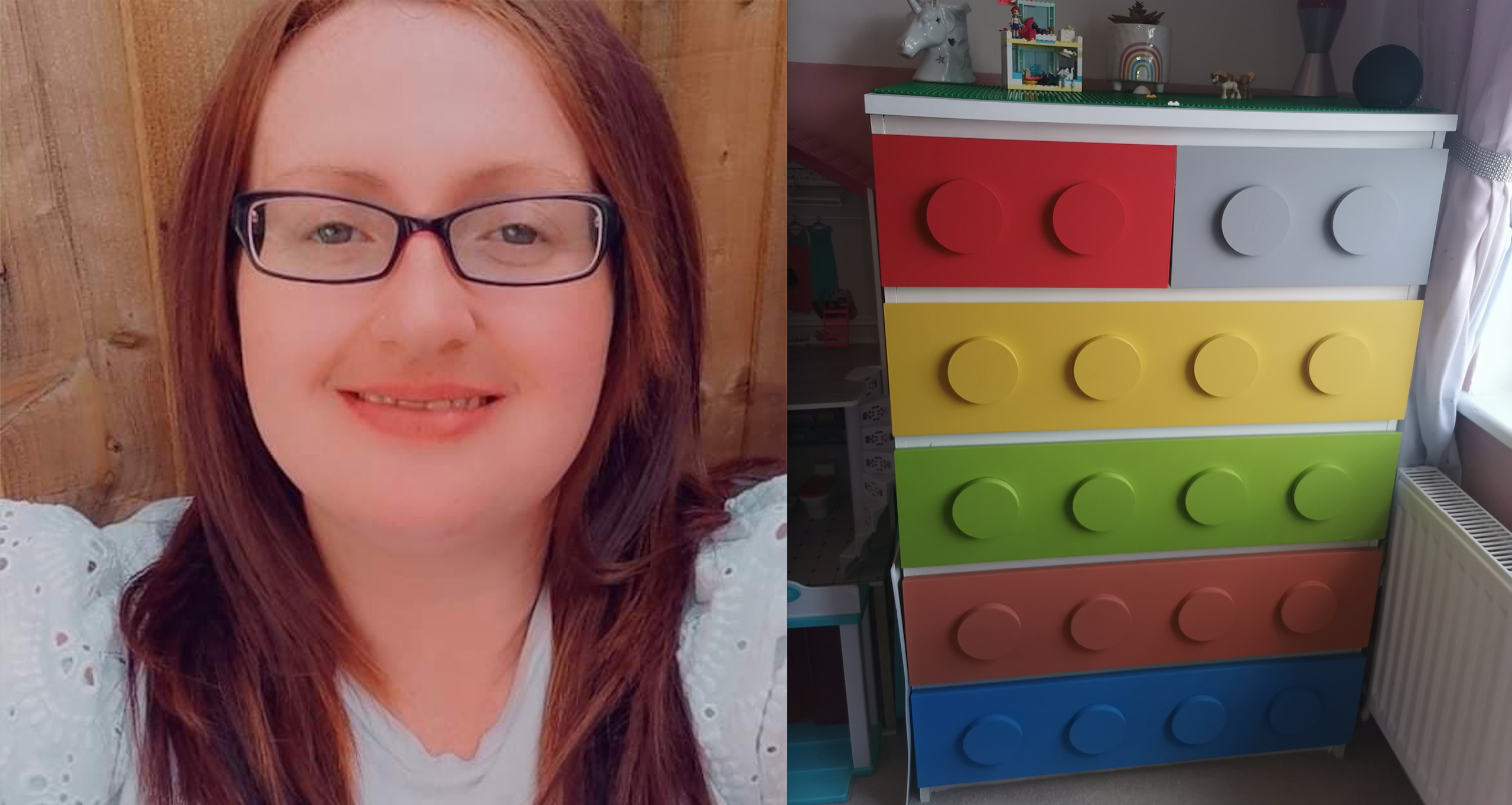 Giving our homes a refresh doesn’t need to cost the earth – as one savvy mum has recently proved.

Keeley Allen, a mum-of-two from Rochdale, decided to upgrade her five-year-old daughter’s room on a budget.

The 32-year-old explains: ‘I’ve just redecorated the “toy room” as I’ve had another baby so my five-year-old daughter, Lily, moved out of her box room and into the toy room so, naturally, everything got a freshen up.’

After a new lick of paint, Keeley also decided to give some second-hand drawers a quirky twist for her Lego-mad daughter – for just £42.50 in total.

The mum found some IKEA drawers reduced from £120 to just £30 on Facebook Marketplace.

She then added MDF circles to the front of the drawers, to give the illusion of Lego blocks – perfect for storing Lily’s collection.

‘The circles can be made from MDF using a circular saw or ordered online,’ she explains.

‘As mine weren’t deep enough in terms of thickness, I glued some together with wood glue. I did this 20 times.’

First, Keeley painted the drawers using white gloss she already had left over from doing the woodwork in Lily’s newly-decorated room.

She then painted the drawers with different coloured paint samples from B&M, to keep costs down, before painting the circles the corresponding colours and gluing them on.

She explains: ‘I first painted the base of the drawers white, and the drawer faces for the paint to stick to then.

‘I then painted each drawer with a gloss roller. The finish is better than a paintbrush, with no lines or patterns. It took about three coats each. Then I painted the circles once they were dry.

‘The hardest part was measuring and glueing them on equally so they looked even.

‘I pulled the drawers out to stick the circles on, but because I used glue they kept sliding till the glue was dry, so I had to hold them until they dried.’

Once the painting was complete, Keeley added green Lego trays on the top.

The mum adds: ‘This is so that it can be used to play with or Lego builds can be kept on top of it when not in use, but still on show for others to see.’

And it’s safe to say that Keeley is thrilled with her bargain DIY project.

She continues: ‘I am currently on maternity leave due to having a seven-month-old baby so time is on my side but funds aren’t – so I ran it through my head for a couple of days, planned what I needed to get or do, and I just cracked on with it when I could – and now it’s finished.

‘Some people have said I could make them to sell.

‘It cost £42.50 in total, and I’m very pleased with how the drawers turned out – I can easily pass them on once my daughter has finished with them.’

Is Strictly Come Dancing’s Emma Barton in a relationship? Find out here