The new “Saved by the Bell” announces the kind of comedy it wants to be from the very start, opening with a campaign ad from California Governor Zack Morris (played with a Republican smarm that doesn’t really exist anymore by Mark-Paul Gosselaar). The spot, which feels like it was produced by the same team who worked on Bobby Newport’s “Parks & Recreation” ads, acts as the extremely thin connective thread from the original series to this 2020 “reimagining. Since leaving Bayside nearly 30 years ago, Zack is still, in the parlance of the Funny or Die series, trash, since his rise to the Governor’s mansion was all part of an elaborate scheme to get out of a $75 parking ticket. This sequence also immediately tears down the fourth wall, as Morris mentions that after college he “became a successful trial attorney” with a shot of Gosselaar (flanked by Breckin Meyer) as either Franklin or Bash from TNT’s “Franklin & Bash.”

It’s an ironic (and cheeky) takedown of the original show and leads into introductions to “Saved by the Bell’s” “New Class,” as Daisy (Haskiri Velazquez) and Aisha (Alycia Pascual-Pena) watch the ad and bemoan the $10 billion in education spending Gov. Morris has cut in order to “bail out the fossil fuel industry,” a fiduciary maneuver that shuts their school down and forces them to be bussed to Bayside High. Meanwhile, our first glimpse of Bayside is awash in all the old tropes of the ’90s sitcom (complete with music stings and dialogue, if not the four-camera presentation) as we meet Zack’s similarly scheme-y son Mac Morris (Mitchell Hoog), Jessie Spano’s son Jamie (Belmont Cameli), and Lexi (Josie Totah), a transgender fashion icon with her own E!-style reality show, “Becoming Lexi: I Am Me.”

But what would a teen reboot be without some of the original teens returning as adults? A.C. Slater (Mario Lopez) is back, though it almost seems like he never left, as Bayside’s gym teacher and beleaguered football coach. (They haven’t beat Valley in 15 years!) Meanwhile, his former flame, Jessie Spano (Elizabeth Berkley), is the school’s new guidance counselor and author of parenting how-to “I’m So Excited, I’m So Scared… To Become a Parent.”

That last joke exemplifies what is the primary issue hampering “Saved by the Bell”: There’s at least three competing shows vying for screen time. The best of these is the aforementioned irreverent comedy, which when it’s really cooking most resembles “Happy Endings” or showrunner Tracey Wigfield’s Emmy-winning writing on “30 Rock.” The jokes per minute at some points make you forget you’re watching a reboot at all, until one of the other shows rears its head.

That Jessie Spano book title, an ode to her very famous caffeine pill freak-out (a scene which is referenced several more times over the course of the season), is part of a second show steeped in nostalgia for and/or referential humor of the original. Seeing Zack Morris’ huge cell phone or having Mr. Dewey pop up for a line or simply referring to long-lost “Saved By The Bell” characters like Jeff or Tori — especially when there’s no laugh line attached — can grind the proceedings to a halt, and likely leave any viewers who didn’t watch the original in the dark. 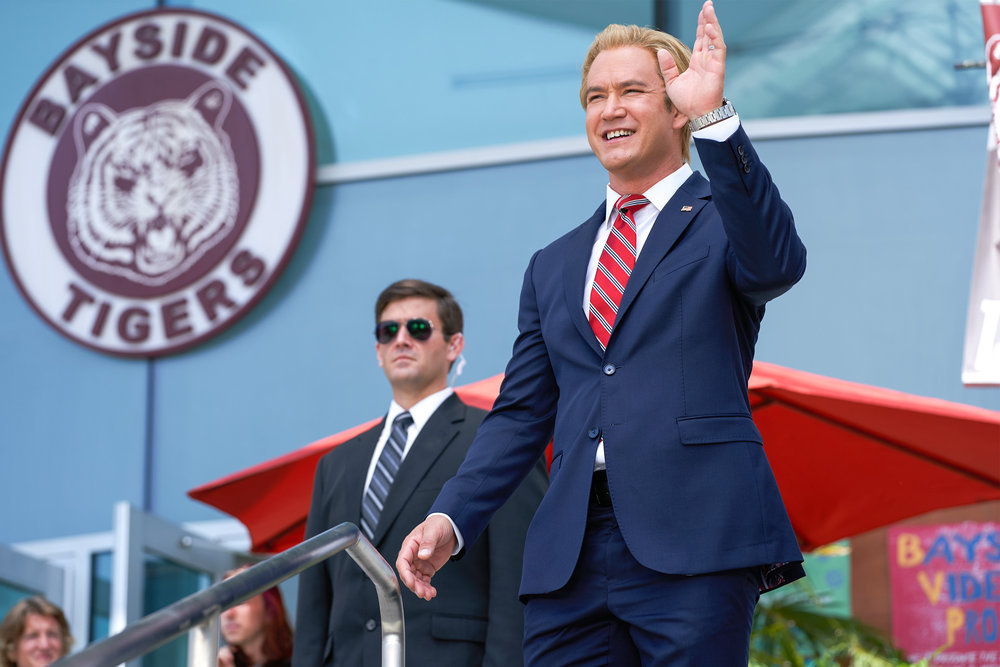 Mark-Paul Gosselaar in “Saved by the Bell”

The eighth episode serves as the most egregious example of this, as it’s almost solely devoted to the original cast. Everyone save for Dustin Diamond’s Screech and Dennis Haskins’ Mr. Belding make an appearance in a plot revolving around Bayside’s new Belding, Principal Toddman (John Michael Higgins) trying to remind Slater, Jessie, Zack, and Kelly (a returning Tiffani Amber Thiessen) that he attended Bayside with them in the ’90s (complete with Higgins being rotoscoped into scenes from the original, including Zack and Kelly’s wedding with Lisa showing up via FaceTime to remind them that he did.) Do they play “Friends Forever?” You bet! Do they immediately undercut it by reminding you that it originally took place in a daydream of Zack’s? You bet they do.

Then there’s a third show, arguably the backbone, which is an updated version of the original, concerned with the trials and tribulations of the new students.

Additionally, Dashiell Driscoll, creator of the previously alluded to “Zack Morris is Trash” video series, serves as a staff writer, and, whether or not he’s the impetus for this, the new series seems concerned with rectifying the sins of the past, whether it’s showcasing that the original show’s hero was typically, if not always, in the wrong, or outright apologizing for the way it treated Jessie Spano, the high schooler, as a nag, when in reality everything Slater consistently told her to relax about was important.

It’s unfortunate that the best of these, the subversive comedy, tends to undermine the more emotional or nostalgic moments of the show. Jokes like “a woman can do everything a man can do except enjoy the films of Todd Phillips” or an extended (incredibly meta) bit about the seniors at the school getting increasingly older (“there is no way that guy goes to our school, he is literally wearing cataract glasses and a Desert Storm hat”) rival those on any comedy this year — they just happen to be incased a teen comedy reboot wrapper. 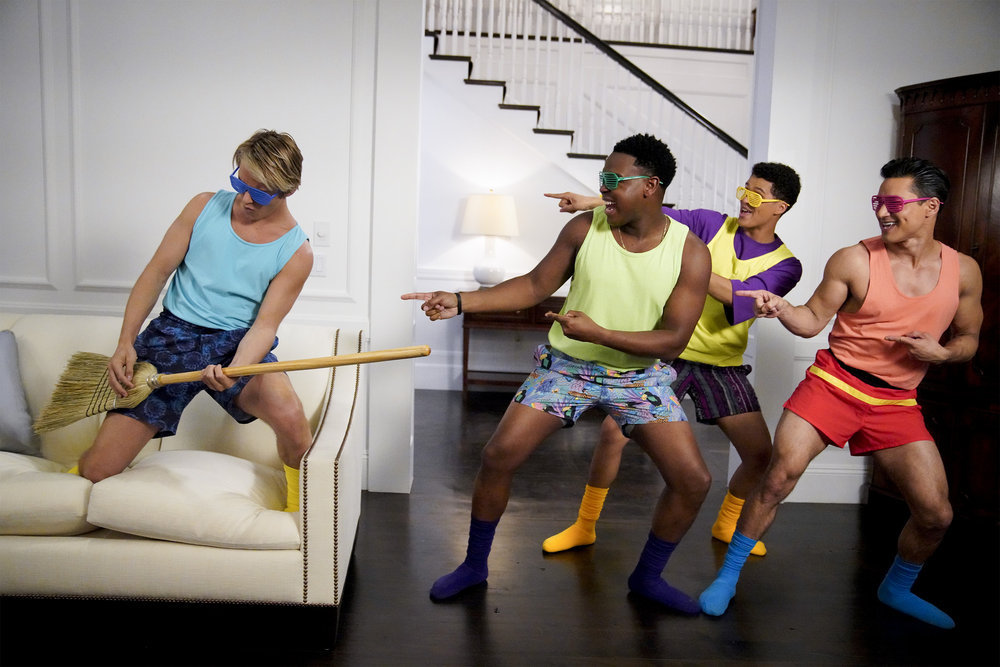 The schizophrenic nature of the show naturally leads to the question: Who is it for? Based on all the referential humor, one would have to assume the target demographic is adults who grew up watching the original. The content also bears this out. Whereas the original “Saved by the Bell,” in spite of Zack’s questionable schemes, was Saturday morning and after-school fare, there’s plenty more adult dialogue here. One of Aisha’s catch-phrases is seemingly “what the dick,” there’s plenty of “bitch/bitches” thrown around, and Jessie unleashes a genuine, if bleeped, F-bomb in the finale. The only question that remains is: Do adults really want to watch a teen comedy about high school? An excellent litmus test will be how viewers respond to Lil Yachty’s updated take on the original theme song.

If they do tune in, they’ll be pleasantly surprised, not only by moments of strong writing, but by some of the performances. Dexter Darden, who portrays Devante, the third of the bussed in trio of students, is excellent, effortlessly swinging in and out of scenes as a student trying to reinvent himself at a new school. There’s something to the way he sort of shrugs off his jokes that makes them work all the better. Then there’s Belmont Cameli, who has the thankless job of playing the stereotypical “dumb jock,” except not only is he dumb, but also awful at football. The writers have wisely imbued Cameli’s Jamie with a preternatural gift for empathy and sensitivity, while still making sure he’s dumb as rocks. (He named his dog Porno, much to his mom’s chagrin.)

Then there’s the real star of the proceedings: Josie Totah as Lexi. Totah’s performance belies the preconceived notions of any nostalgia-laden reboot and would make sense on esteemed shows like “Arrested Development” or “30 Rock.” In fact, during a GOB-like moment of clarity in the finale, Totah’s Lexi bemoans catching “empathy.” Her acerbic delivery throughout the series is impeccable, and every time she shows up, the screen seemingly gets a bit brighter. 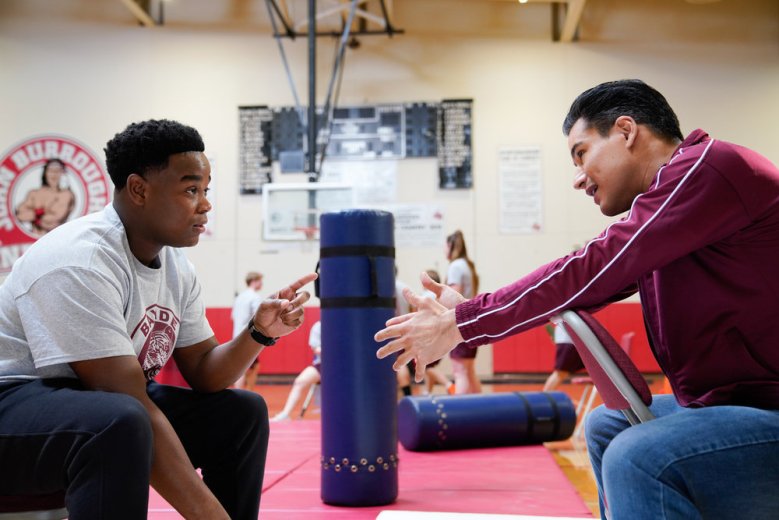 Dexter Darden and Mario Lopez in “Saved by the Bell”

It’s worth noting that Mario Lopez is good in this. Really good. For viewers who only know him as the host of “Extra,” his older, more mature take on Slater will come as a shock. He’s also an incredibly generous scene partner, delivering his punchlines with aplomb while also serving as the butt of most of the jokes, given the reboot doesn’t really have a Screech character. He also has some of “Saved by the Bell’s” more touching scenes, and sheds actual tears near the end of the season. (Cheyanne Jackson, further strengthening the “30 Rock” pedigree in a very small role, is also very funny as Jessie’s husband, an elitist author and out-of-touch absentee father.)

In the end, “Saved by the Bell” constantly feels a moment away from forging its own identity, only to be pulled back by nostalgic nods to its predecessor. For every really funny non sequitur there’s an equally baffling “hey, hey, hey, what is going on here?” If there’s any hope for continued success, it should lean hard into what makes it exciting, the incisive and subversive writing that, without impediment, could place it amongst the best comedies of the year.

“Saved By The Bell” premieres Wednesday, November 25 on Peacock.

Who is Daisy May Cooper and is she married?