In Wednesday’s midseason finale of Resident Alien, secrets were exposed and emotions spun wildly out of control, as an alien-human hybrid baby ravaged its way through Patience, and crashed a surprise birthday party thrown for Dr. Harry V.

By the end of the messy, yet delightful hour, the Ben/Kate/D’Arcy triangle came to a revealing head, Deputy Liv found some much needed courage and Asta? Well, she killed a guy. And while Harry tried to keep the baby contained, he discovered he could communicate to the dearly departed Goliath through the l’il creature… if only it hadn’t scampered off after Harry got shot by a Galvan/Powell goon. (Yes, my friends. This finale was a lot!)

Here, creator and executive producer Chris Sheridan answers our burning finale questions, plus teases what’s ahead in Season 2’s latter half (which is set to hit Syfy some time this summer).

TVLINE | McCallister and Logan finally meet again, but a mysterious shooter takes Logan out. Can you give any clues as to who that was… one of the Greys, perhaps?
CHRIS SHERIDAN | I can’t say whether it’s one of the Greys or not, but here’s what I can say: Harry is told by Goliath at the end of 208 that there’s another alien race on earth. So we can do the math and realize that this [character] is one of those. It’s safe to say that moving into the second half of the season, that character will play a part. His name is Joseph, and he’s played by Enver Gjokaj. He’s an incredible actor. He’s so good and such a great guy, and Joseph’s going to be a great foil for Harry.

TVLINE | The party was such a fun way to get everyone together under the same roof, but let’s talk about the Ben and Kate of it all. How would you describe the communication problem between them, and how will they move forward from all of this?
Yeah, Ben and Kate don’t have great communication! In Episode 10 of Season 1 where D’Arcy kisses Ben, he did the appropriate thing as a husband would do, which is, pull away and say, “No, I’m married. I can’t do this.” He came home to kidnappers, the men in black trying to attack his family, and they did away with that. But you’d assume the next day, when that calmed down, he would’ve sat down and had a conversation with Kate. That would’ve been the mature thing to do, but that’s not easy for Ben. The honesty and intimacy between him and Kate are missing. They both have this wall up with each other, and they have to figure that out.

The season was purposely built so that there were things happening that became secrets they were keeping from each other — the kiss, Ben hanging out with D’Arcy in Episode 6 and not telling Kate about it, Kate maybe being pregnant and not telling Ben about it. There was a lot of dishonesty going on, which was purposely built so that it could come out in Episode 8 and be part of the character story engine of the episode. It’s really about honesty and being able to tell the truth to someone you care about even when it’s difficult. And when you don’t, it comes out eventually and it’s a little bit dirty. As bad as the fight was, it gets them talking. It gets them addressing the issue head on, which is what any couple needs to get through these moments. We’ll see in the second half of the season, they have no choice but to deal with it now because it’s all out in the open.

TVLINE | It’s a little less clear if Kate and D’Arcy will be able to patch things up. Was D’Arcy’s connection to Kate born at least a little bit out of guilt, and will the two ladies be able to patch things up?
It’s a great question. I think in the beginning it was born a little bit out of guilt, but as they got into it in Episode 7, D’Arcy realizes, “Here is someone who might get me in a way that no one else here gets me.” Kate was an elite athlete in college and there’s just a mentality there that not everybody has, and they have something in common with that. There’s something in Kate that D’Arcy recognizes in herself, and that pulls them together. So I think it becomes a legitimate friendship. They have this falling out, but they will find a way to work through it in the second half of the season.

TVLINE | We learned that Harry can communicate with Goliath through the hybrid baby. How will the baby factor into the rest of the season?
The baby runs away, but that’s not the end of the baby. There’s now an alien baby out in the world that likes the taste of humans. Harry has to find it for a couple reasons. He has to get the rest of the message. He knows there’s an alien race on earth, but he doesn’t know much more about it. He kind of cares less about the fact that the baby could be going around killing people. For him it’s more about getting this message and figuring out who’s on earth. 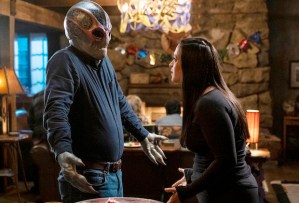 TVLINE | With all of this baby talk, I’m left wondering if Harry is ready to be a foster parent of sorts.
Thematically, this whole second season is a lot about parenting — we see that play out with Asta and Jay, we see it with Dan and Asta, we see it with Mike and Liv, then Kate and Max. That theme will carry over to Harry as well with Asta parenting Harry, who’s basically just a man-child trying to figure out the world. He’s become a bit of a surrogate to Asta not having a child of her own because she had to give up Jay. But we will extend that theme in the second half of the season with Harry searching for this baby and what that looks like when he finds it.

Liv is an example of people out there who have seen UFOs and have seen something that isn’t typical, let’s say, and they’re afraid to say something because there’s so much social negativity around people who see these things, so they stay quiet. Just recently, people are starting to be honest about it and open up, and a lot of that is because the military is starting to declassify stuff, military pilots are now saying they saw UFOs. It’s not a weird thing anymore, and people are more comfortable telling their truth. Liv is an example of those people. It doesn’t mean they’re crazy, it means they have a truth inside of them that they want to get out. She’s trying to build up the inner strength to be able to tell her truth, and we’ll see more of that in the second half of the season, too. 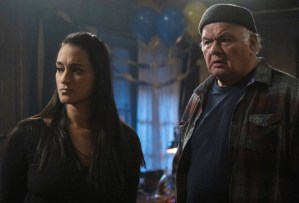 TVLINE | Lastly, Asta Twelvetrees is a murderer! How is she going to deal with the fact that she’s taken a human life?
She doesn’t deal well with it! [Laughs] This is hard for her. It’s not only hard for her, but in Harry’s path towards empathy, which is another theme of this season, Harry’s learning what it’s like to be someone else, to feel what other people are feeling. He has this empathy growing within him. So the more upset Asta is, the more upset Harry is. It’s not just a problem for Asta who committed this huge act where she killed someone. However upset she is, Harry’s going to feel it. He’s going to be really uncomfortable with it, and he’s going to try to fix it. We’ll come into the second half of the season with Asta spiraling out a bit about this, but her spiral takes Harry down with her. We’ll watch how they get through it.

Keep in mind too, it’s not just Asta being upset that she killed that guy, but also Harry realizing that he almost died. He got shot with a bullet and it didn’t kill him, but it could’ve! That’s a real thing. Everyone knows about death, but if you ever have a near-death experience, suddenly it takes on new light. You’re reminded how fragile we are and how we could be gone in a second. So Harry’s going to have to deal with those emotions as well, in addition to helping Asta deal with hers. When we come back, there’s a lot going on emotionally between the two of them, which all helps build toward Harry’s journey toward being more human and understanding these human feelings in a very deep way.