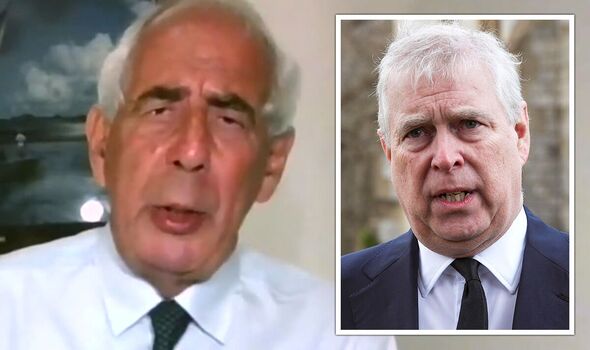 On Tuesday’s TalkTV, Tom Bower accused Prince Andrew of using Prince Harry’s “attacks” on the Royal Family as a distraction so he can “clear his name” after he agreed to a multimillion pound settlement with Virginia Giuffre. The Jeffrey Epstein victim accused the Duke of York of sexual assault but Andrew has continuously denied all allegations.

Andrew is reportedly considering a legal bid to overturn the settlement with Virginia after the latter’s sex abuse case against US lawyer Alan Dershowitz was toppled.

Speaking on Jeremy Kyle Live, Tom was asked if he thinks Andrew will pursue further legal action against Virginia.

The royal biographer claimed: “I think he will try something because he’s a desperate man.

“Prince Andrew hopes he can prove that she invented it against him… I think her confession of a mistake gives him great grounds for an appeal.”

The Duke of York agreed to an out-of-court settlement with Virginia ahead of the late Queen’s Jubilee.

Tom went on to address the reasons why he felt Andrew reached this settlement.

“He’ll say he was under great pressure because they had to have The Queen’s Jubilee and all the rest and he’ll say now there’s the chance for him to clear his name,” he continued.

“I think the fact that his ex-wife Sarah [Ferguson] was admitted to Sandringham and is clearly pushing her daughters into the limelight now, shows that he’s looking for a moment of resurrection.”

“Unfortunately for King Charles, the royal family is on the back foot because of Harry’s attacks, and Andrew sees a moment that he can strike and perhaps be resurrected and clear his name,” Tom claimed.

“He’s gathering his horses, he’s got a good chance, he thinks, of rehabilitation. I don’t think he can manage it.

“But the damage to King Charles and the family of this mess has been resurrected, all again is going to be terrible.”

“I want everything out. It was references to black books, there have been references to video tapes, I hope every single encounter with, between anybody, and any of these people was videotaped,” he said.

“I want to see everything. I hereby waive any privileges and hereby demand and call for a revelation of every deposition, every piece of evidence, every black book because of course, that will prove clearly what we already know that I never met this woman, never heard of her.”

When asked whether she thought others were involved, she replied: “I don’t know if anyone else will ever be brought to justice.

Jeremy Kyle Live airs on TalkTV from Monday to Thursday at 7pm.

Why is The Martin Lewis Money Show not on ITV tonight?