Kay Burley should ‘be held to account’ says Piers Morgan

Sky News anchor Kay Burley has been absent from her slot on the news channel this week after taking to Twitter at the weekend to apologize for an “error of judgement” which resulted in her breaking COVID-19 guidelines. However, while she admitted to doing so on Monday, Piers Morgan and Susanna Reid failed to mention it on Tuesday’s Good Morning Britain, prompting fans to wonder why they weren’t addressing the presenter’s actions. On Wednesday, however, Piers responded to the calls, claiming Kay should “be held to account”.

“I think that the rules are there for a reason,” Piers said to GMB viewers.

“They’re for all our safety. We take no glee in it, she’s a friend of ours, but she should be held to account.”

The topic had been brought up in a debate with guest Afua Adom and Kevin Maguire.

Apologising for her actions prior to Piers and Susanna’s GMB debate on the topic, Kay penned on Twitter: “Evening everyone. 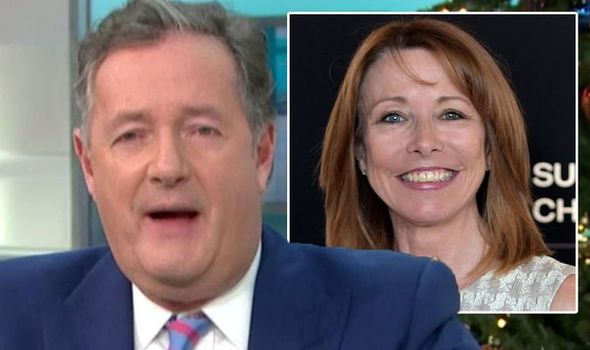 We will use your email address only for sending you newsletters. Please see our Privacy Notice for details of your data protection rights. Susanna Reid feels fantastic’ as she beats Kim Kardashian to best bum

“I want to apologise to you all for an error of judgment.  On Saturday night I was enjoying my 60th birthday at a Covid compliant restaurant.

“I am embarrassed to say that later in the evening I inadvertently broke the rules.

“I had been waiting for a taxi at 11pm to get home.

“Desperate for the loo I briefly popped into another restaurant to spend a penny. I can only apologise.”

Piers has been incredibly vocal in recent months against a number of politicians and celebrities who have been caught breaking coronavirus guidelines.

Most recently, this included a fiery rant at singer Rita Ora who was caught hosting a birthday party to host her 30th.

However, his coverage of Kay’s actions brought an equally fiery reaction from ITV viewers, who were less than pleased that he appeared to be giving the presenter an easy time.

“Piers Morgan has just mentioned Kay Burley on GMB and was soft as s***e and nowhere near as aggressive and name-calling like he was with Cummings – because of course they are journalist friends,” one viewer claimed on Twitter.