Phillip Schofield, 59, and Holly Willoughby, 39, were back on hand to present the mid-week edition of This Morning, continuing to entertain viewers in the midst of the lockdown. Amongst the hard-hitting topics on coronavirus, there were also some lighter moments. Fans of the ITV show certainly would’ve cracked a smile when an apparent technical blunder left the host bounding from his chair in a rage after noticing something wasn’t quite right with the studio set-up.

The moment came after the hosts were waiting to speak with viewers following a pre-recorded segment being shown.

Adhering to social-distancing rules, Phillip and Holly continued to sit at least two metres apart, with the camera operators also complying with the measures.

However, there was a risk this could have all gone out the window when the former realised a prop was blocking him from seeing what was being shown on the monitor in front of him.

Getting up from his chair with haste, the host vented his fury about his view being blocked and soon addressed the issue as the crew weren’t allowed to enter the presenter’s perimeter. 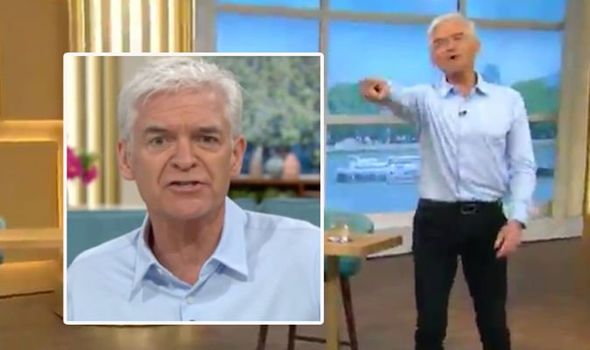 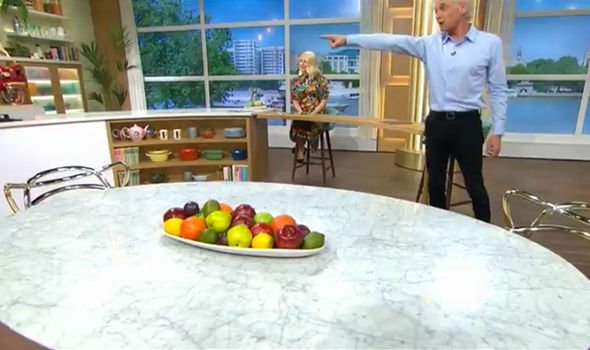 Instead of reading the script following the pre-recorded segment, Phillip was seen ushering a cameraman to change his angle.

Holly was unsure as to what her co-host was doing, as she went on to ask him: “What are you doing?”

It seemed a crew member from the other side of the studio had seen what was wrong, but the presenter raged as he told them to keep their distance.

“Go back to where you were,” he jokingly told them, before picking up a flower pot which was making it a struggle to see what was on the monitor opposite him. 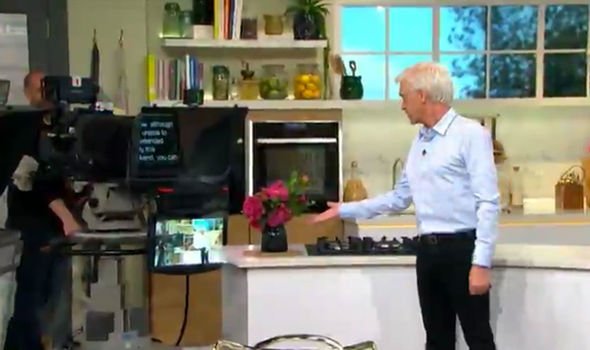 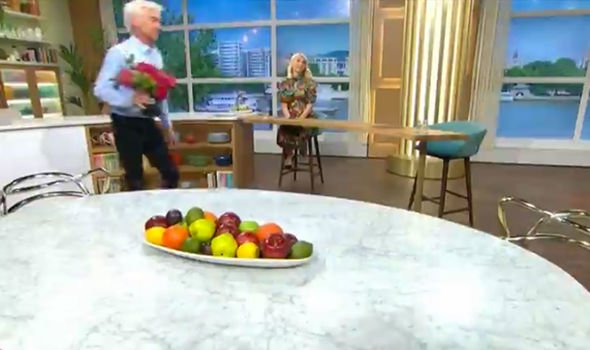 How am I supposed to see?

“How am I supposed to see what’s on the telly? That is actually right in front of the camera,” he asked the staff in the studio.

“But they look so pretty, Phil,” Holly declared, to which Phillip hit back: “Only I can see them,” before fixing the technical blunder.

The presenter was then seen picking up the prop and moving it near the sofa where it was firmly out of view or obstruction.

Taking his seat once again, the host said: “Now I can see what’s happening on the telly.”

Following Phillip’s rant, viewers were then treated to some highlights from chef Gino D’Acampo’s, 43, time on the show.

Since the lockdown measures were introduced, fans of the show have been reminded of some of the most entertaining segments of the programme from the past couple of years.

With the culinary genius known for causing mischief in the kitchen, it was only right the presenters took a trip down memory lane of their days cooking with him.

Taking to social media, viewers were thoroughly entertained by the homage and voiced their delight at the uplifting tone of the show.

One posted on Twitter: “@thismorning Brilliant what a way to cheer me up – Gino’s best bits #ThisMorning.”

Another added: “Nothing like @Ginofantastico’s best bits to make me chuckle on tough days @thismorning#ThisMorning #gino.”

Whilst a third commented: “@Schofe @hollywills thank you for showing ‘Gino’s best bits!’ On #ThisMorning. There was some absolute classics and had me giggling throughout @thismorning.”

Tomorrow, Strictly Come Dancing star Anton du Beke, 53, will join Phillip and Holly to get them and viewers on their feet and shaking their hips.

This Morning airs weekdays at 10am on ITV.

‘Godzilla: King of the Monsters’ Is No. 1 at the Box Office, But the Lizard Fails to Impress