James Cleverly was doing the rounds on all the morning news channels today and when he appeared on Good Morning Britain, he spoke to Ben Shephard and Charlotte Hawkins about the new coronavirus measures the government have put in place for those arriving into the UK from hotspots around the globe. The discussion then turned to the low percentage of BAME people accepting the vaccine in Britain, and as Hawkins presented a fact to the politician, he abruptly ended their conversation, claiming he had another broadcaster to go to.

Shephard began: “Another area I’m sure you are personally concerned about as well, and we are talking about it as much as we can, is the uptake in the BAME community when it comes to vaccines.

“What are you thoughts on this and how are the government trying to tackle it? What are you concerns? How are we going to combat that and try and get the uptake to increase?”

The MP replied: “I think the initiative put forward by my colleague Kemi Badenoch, our Equalities Minister and our cross-party work to produce a video which was a really positive step.

“It says to those [in BAME communities], ‘the vaccine are extensively tested, they are safe, they are effective, you should absolutely take the vaccine when called to do so by the NHS. It’s the best way to protect yourself and your families, protecting your communities.’” 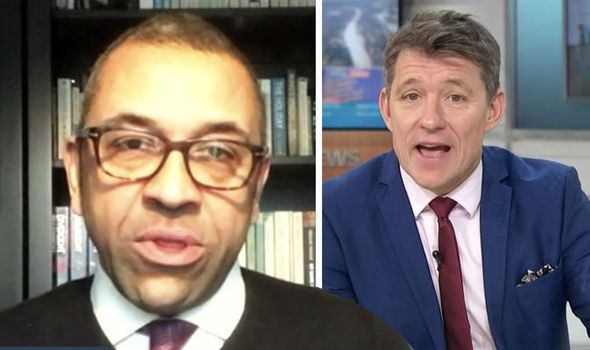 Hawkins continued: “It’s obviously great to see that video but when you look at the statistics, 57 percent of people from a BAME background said they would take the vaccine -“

“I’m sorry – I’m terribly sorry, you guys have overrun,” Cleverly told the presenters. “I have to go across to another channel now.

“So I do apologise, we had agreed to finish by 8.40, because I’m expected on another TV channel.”

“Okay, we will have to leave it there in that case, but hopefully we can get you back on another time because obviously it is a really important issue and we would be interested to know what else is being done at a government level to try to tackle that big discrepancy between the figures,” Hawkins replied.

“James Cleverly, thank you so much for your time.” 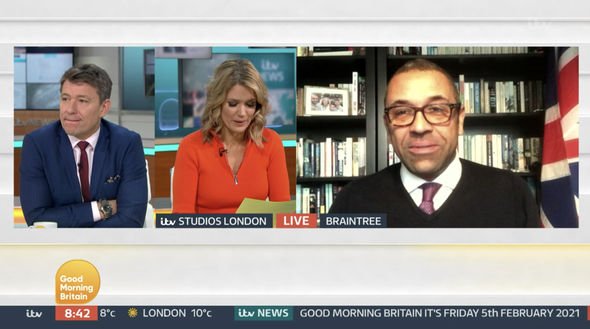 After Cleverly left, Shephard turned to his co-star and joked: “I can’t believe you kept him for longer than he was supposed to be here Charlotte. Outrageous behaviour!”

“I know, but I had a really important point I wanted to ask him, that’s all,” she commented before mouthing “oops” to the camera.

“We’re trying to put a lot to this government ministers in a very short space of time,” Shephard argued.

Hawkins said: “We’re trying to squeeze it all in aren’t we. We have lots of questions and not a lot of time to ask them.

“That was a really important point; I was about to say 57 percent from a BAME background would take the vaccine, that’s compared to 79 percent of people from a white background who responded.

“So there’s a big difference there that needs to be tackled,” she added. 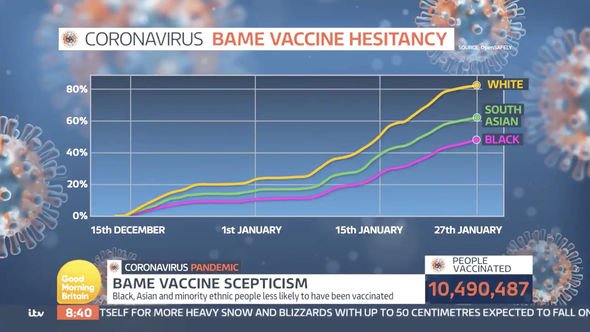 Taking to Twitter to discuss what happened, one said: “It seems that the go-to response for the government on difficult questions  is to end the call because they are due on another TV programme because #GMB overran.”

“How important is the vaccine uptake among Black and other ethnic minority communities for UK Government minister James Cleverly? Less important than his 8:40 media appointment. That’s how!” Someone else tweeted.

“A sad state of affairs when you have to run away from a Charlotte Hawkins interview. #gmb,” a viewer mentioned.

Someone else chimed: “Piers would never let him cut off the interview & just go off to another channel so easily #GMB.”

“James Cleverly, cleverly abandoned #gmb Ohhh the irony of that name,” one joked.

Another mentioned: “Oh the old ‘I’ve got to go on another channel’ excuse when an awkward question is asked, seems to be the new ministerial get out clause now, how transparent! You couldn’t make it up… #gmb.”

“Another Minister walking out on #GMB because the questions are to hard. He’s done Sky, the BBC and ITV which TV channel is Cleverly going to?” A fan commented.

Good Morning Britain airs weekday mornings at 6am on ITV.

Mike Holmes’ Net Worth Is Higher Than You Think