Outer Banks‘ Season 2 finale is titled “The Coastal Venture” but it also very easily could be called “The Dads Who Aren’t Actually Dead.”

The hour not only details Ward’s successful faking of his own demise — not to mention his surviving a late-episode blow to the head that probably should’ve done him in — but also reveals that John B’s father, Big John, isn’t gone, after all. (Read what executive producers Jonas and Josh Pate had to say here.)

We’ll want to know what you thought about that huge twist in a moment. But first, let’s review what happens in Episode 10.

SAME AS HE EVER WAS | We pick up right where Episode 9 left off, with Maddie reeling from coming face-to-face with her back-from-beyond father, Ward. He explains that the explosion was the only way that he could keep his loved ones safe “so we could be a family again.” He details how he got away by donning scuba gear and swimming away while the wreckage blazed, then he happily announces they’re moving to Guadalupe. 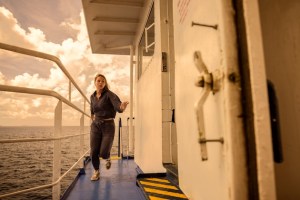 Maddie is, understandably, skeptical of his motivations, particularly when he claims John B agreed to trade the gold cross for Sarah while she was unconscious. So the first chance she gets, she fakes sea sickness, slips out of her room — and sees the cross in the cargo hold, proving Ward a liar — and steals a ship-to-shore radio so she can call 911. But the ship’s captain catches her and shuts it down.

This enrages Ward, who slaps Sarah (!), binds her hands and tosses her in a storage area. But then she manages to trap him there, instead. And now seems like a good time to check in on the others, right?

MAYDAY! | In the container, the Pogues prepare their ship-takeover plan. John B and Pope will go, while Kiara and JJ wait for them and/or serve as backup. “Don’t get shot. That’s all I got,” Kiara offers before the boys head out. 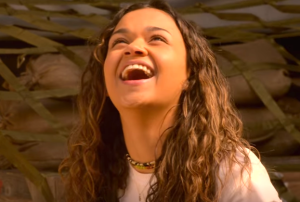 The guys split up, with Pope heading to the engine room. As we all quickly deduced, it’s Cleo who’s manning the engine on this crew, and she puts that duty aside for a moment in order to fight Pope when she realizes he’s an intruder on her ship. She eventually gets him up against the pipes, with her knife to his throat, and he manages to choke out that he’s with his friends Sarah and John B — which piques her interest. Elsewhere, John B sees Ward and realizes he’s been had. When he runs into Pope and Cleo, she decides to help them take over the ship.

There’s a lot of running around, but eventually the captain is prisoner on the bridge, and the crew and most of the Camerons are lured into the hull, where JJ and Kiara quickly close the doors, locking them in. Ward and Rafe are still roaming the vessel, however, and the engine — absent Cleo’s attentions — is on the brink of doing something very gnarly. It’s time to get off this boat.

FULL CIRCLE | As Rafe chases John B all over the ship, Pope uses the crane to bring up the (very heavy) cross from the cargo hold, and Ward finds Sarah just as she’s about to descend the ladder to the lifeboat she’s lowered. “You’re not one of us, right? Not anymore. And you never will be. You’re one of them,” he says, and she nods sadly. So he grabs her by the neck and attempts to strangle her.

Ward would probably be successful, except that John B jumps in at the last minute and pulls the older man off her. They fight, and eventually John B knocks Ward down so hard that he hits his head on the metal edge of the deck, much in the same way that John B’s dad did when he and Ward fought about the gold. “Is this how you did it?” John B asks, crying, as Ward bleeds and certainly looks like he’s not going to be breathing much longer. “This is all your fault,” the teen adds.

Then John B looks at Sarah, who seems to give her consent for him to dump her dad into the ocean like a barnacle-covered anchor. But before he can do so, it seems like Ward dies. And plus, there’s mayhem happening on the other side of the ship: The captain has freed himself and his crew, and he’s just knocked out JJ and tossed him into the sea.

Kiara immediately hops in and pulls JJ to the surface, helping him stay afloat as she screams for help. And Pope comes to the realization that he’s not going to be able to leave the boat alive with the cross in his possession. “If we can’t have it, no one can,” he mutters to himself, making the crane drop the artifact so it plunges into the deep. Rafe and members of the crew — who have realized exactly how much money just got added to Davy Jones’ locker — scramble to catch the rope tied to the cross before it completely slithers off the deck. The distraction allows Cleo and Pope to jump off the side and escape.

ALL’S WELL THAT ENDS… HORRIBLY | Eventually, John B, Sarah, Cleo, Pope, JJ (who is OK, just dazed) and Kiara make it into the lifeboat. Rafe and the crew are successful in pulling the Cross of Santo Domingo back to safety, which means the Camerons are in control of all of the gold. And when the lifeboat’s motor stalls for a moment, making the Pogues a group of bobbing ducks, Rafe aims his rifle at them but doesn’t take the shot. They quickly get the motor revving again, and the teens get away with their lives… but not much else.

Later, Rafe tells a despondent (yet somehow STILL ALIVE?!) Ward that he’s prepared to lead the family’s fight now, and that he’s going to track down Sarah. “I’ll find her,” he promises in that very scary way he has, and either blood loss or complete failure as a parent or a little of both makes Ward stare at him, glassy-eyed, and say nothing. 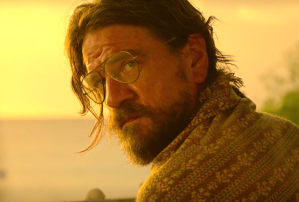 MEANWHILE, IN BARBADOS | The teens make it to a deserted beach, which JJ christens “Poguelandia.” They start a bonfire and party, because Pogues gotta Pogue. Back on the Outer Banks, Kiara’s family hangs “Missing” posters with her face on them, Pope’s dad is sad, Topper finds the Cameron home empty and the new sheriff gives a press conference.

BUT WAIT. Then we move to Barbados, where Carla Limbrey (almost forgot about her, right?) gets out of a cab and brandishes an envelope with the Royal Merchant emblem on it. “How is he?” she asks a man at a shack. “Half dead for a long time,” the man replies, but brings her in anyway.

“You wrote to me about the shroud,” she says to someone off-camera. “I know where it is,” a man replies. “I can help you.” Wait a minute… it can’t be… But as the camera turns to him, IT IS! “But you have to help my son,” Big John Routledge says.

Now it’s your turn. What did you think of the episode? Grade the finale and the season as a whole in the polls below, then sound off in the comments!

EastEnders spoilers: Sharon Mitchell lashes out at husband Phil as he makes surprise return to Albert Square – The Sun