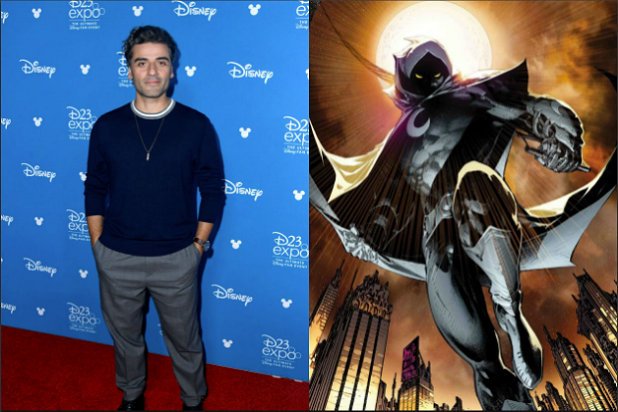 Oscar Isaac is in talks to play Marc Spector, the lead superhero on upcoming Disney Plus show “Moon Knight,” according to an individual with knowledge of the project.

Moon Knight is a fascinating character, because while on the surface he comes off like Marvel’s attempt to rip off Batman, his powers are actually magical, weird mystical abilities tied either to an ancient Egyptian god and the moon — or to his fractured psyche. More on that in a moment.

Created by writer Doug Moench and artist Don Perlin in 1975, Moon Knight debuted in Marvel’s “Werewolf by Night,” where he’s introduced hunting the title character before teaming up with him instead (the two have generally been allies ever since). Moon Knight’s story goes like this: his real name is Marc Spector, and he’s the Jewish son of a rabbi who fled to the United States from Czechoslovakia during World War II. Spector grew up in Chicago and joined the Marines, then became a CIA operative, and then a mercenary after that.

While in Egypt on one of his mercenary gigs, Marc ran afoul of his employer and was nearly killed — he only survived when his companions dropped his body in a tomb in front of an idol of Khonshu, the Egyptian moon god. While unconscious, Spector’s spirit met Khonshu, and Khonshu healed his injuries and granted him the power of the moon — basically making him able to survive mortal wounds and giving him super strength at night.

But that’s not all. Moon Knight suffers from dissociative identity disorder, or multiple personalities, and he’s got a pile of alter egos, including at one point Captain America (!) and Wolverine (!!!!!!). Because of this issue with his mental health, there’s long been some question about whether Khonshu is actually real, and that question has often been part of the hook for his character arc.

But whether or not Khonshu is fake, as established during writer Charlie Huston’s run on “Moon Knight” vol. 3 (in 2006), Moon Knight’s powers are definitely real, and they’re definitely magical. As the mutant The Profiler tells him at one point, it’s either because Khonshu is real, or because Spector’s belief in Khonshu is so intense that he manifested them himself.

“Moon Knight” will be led by Jeremy Slater, who co-created Netflix’s “The Umbrella Academy.” The series were first announced by Marvel Studios chief Kevin Feige during D23 in August last year, along with “Ms. Marvel.”

Oscar Isaac will next be seen in “Dune,” and he recently wrapped shooting on Paul Schrader’s “The Card Counter.” He’s also attached to star in and produce the Lionsgate film “London” with Ben Stiller directing. He’ll also star in and produce the adaptation of Brian K. Vaughn’s “Ex Machina” comic re-titled “The Great Machine.” Isaac will also play a young Ford Francis Coppola in “Francis And The Godfather,” about the making of “The Godfather” with Barry Levinson set to direct.

Oscar Isaac is repped by WME and Inspire Entertainment.

‘Billions’ Review: In ‘The Chris Rock Test,’ a New Rival for Bobby Brings a Familiar Refrain