This post contains spoilers for the season finale of Only Murders in the Building, which is streaming now on Hulu.

Early in “Open and Shut,” the conclusion to the first season of Only Murders in the Building, Oliver, the director-turned-sleuth played by Martin Short, considers where his true-crime podcast’s investigation has led and declares, “What a terrific goddamn finale this is gonna be!” This is one more self-aware joke in a season full of them — but one that also raises expectations for Only Murders the TV show.

The series became one of this year’s biggest televised delights because it managed to have its metaphorical dips and eat them, too. (Oliver wouldn’t dream of eating cake.) It was an absurd parody of citizen detectives and the podcast industrial complex, yet the show also treated the murder of Tim Kono (Julian Cihi) and the investigation by Oliver, Charles (Steve Martin), and Mabel (Selena Gomez) as an event with real emotional weight. This was a murder meant for its heroes — and/or the viewers following along at home — to solve.

Constructing a Murders finale that worked strictly as a comedy would be one thing. Not that comedy is easy, but when your show is co-created by Steve Martin (along with John Hoffman), successful humor feels attainable. And good sitcom season finales aren’t exactly a rarity. But satisfying resolutions to season-long mysteries are a lot trickier to pull off. For every Mare of Easttown or Big Little Lies Season One, shows that effectively lay out their cards in the final hour, there are countless screw-ups, like The Undoing or The Killing (which punted solving its mystery altogether into an unsatisfying second season). “Open and Shut” was trying to walk a tightrope: It had to make sense with all that we had previously learned about Tim’s death; feel at least somewhat surprising but also not like a cheat; and weave plenty of laughs in with all that plotting.

That’s a very high bar, and one that “Open and Shut” (written by Hoffman and Rachel Burger and directed by Jamie Babbit) clears by a country mile. The episode mixes hilarious verbal and physical comedy with a solution to the Tim Kono mystery that feels earned. And it sets up a second season in a way that doesn’t undermine what we’ve seen so far.

After much of the season pointed the arrow of suspicion at the podcast’s wealthy sponsor, Teddy Dimas (Nathan Lane), and his son Theo (James Caverly), the eighth episode made clear that Teddy and Theo(*) had not killed Tim, while the ninth led us to the idea that the true perpetrator was Charles’ bassoonist girlfriend Jan (Amy Ryan). But the Dimases being red herrings didn’t come across as a cheat, largely because they still were involved in a murder (or, at least, manslaughter) in the building, just the decade-old one where Theo pushed Mabel and Tim’s friend Zoe (Olivia Reis) off the roof, followed by Teddy framing Zoe’s boyfriend Oscar (Aaron Dominguez) for the crime.

(*) The seventh episode was wonderful in the way it presented Theo’s POV as a deaf person. Scenes featuring Theo offered an extremely muffled soundscape whenever he was present, while other scenes cleverly avoided spoken dialogue. 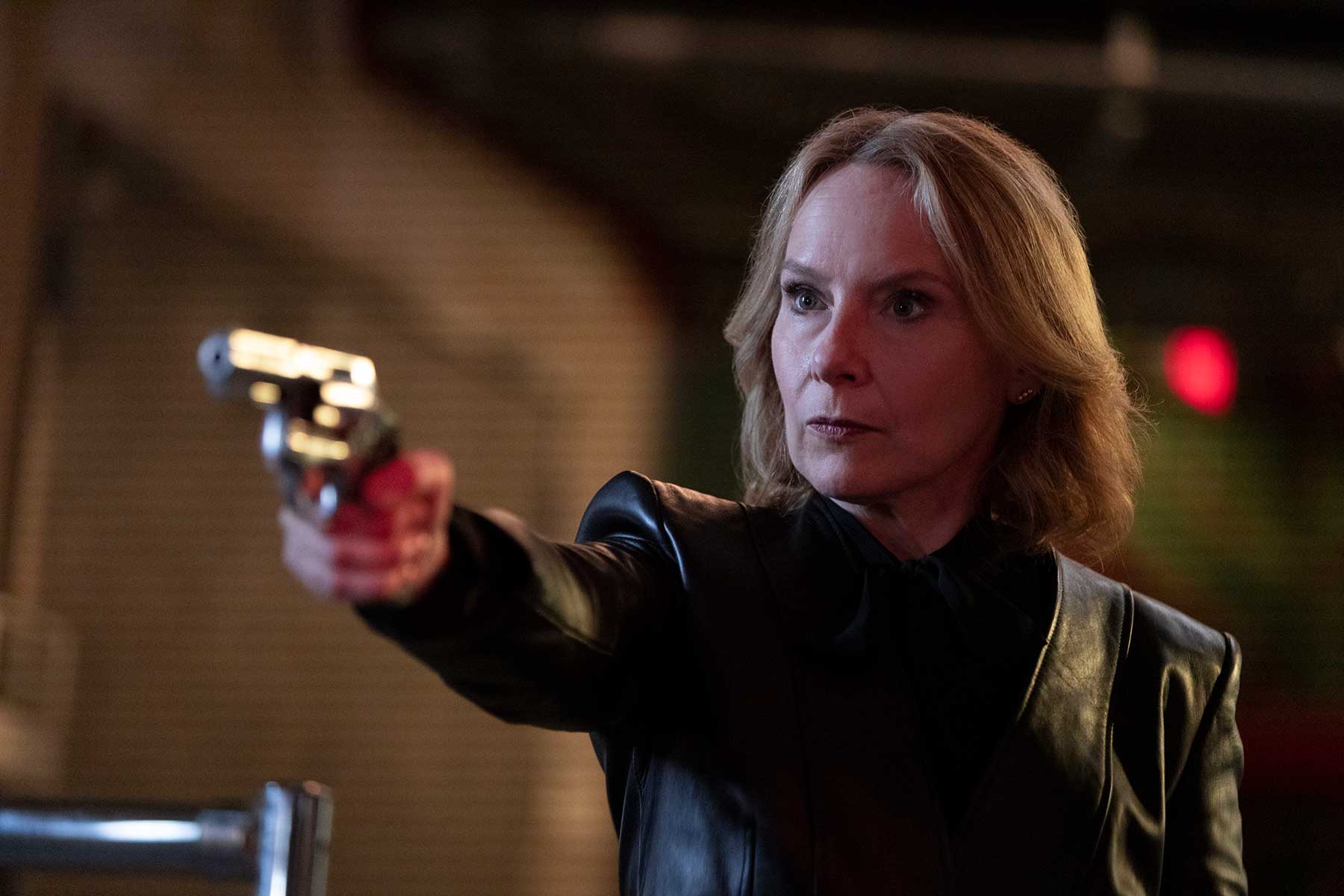 That left Amy Ryan as the most prominent member of the larger ensemble who was still in play as a potential killer(*), and someone who was arguably too well-known and talented to be there solely as Charles’ love interest. And while Ryan is best known as a dramatic actress, she’s demonstrated impressive comedy chops on The Office and Broad City, among other places. So she fit exceptionally well into the Martin/Gomez/Short triumvirate, even when Oliver kept complaining about Jan’s attempts to insert herself into the investigation. (Perhaps what played at the time as jealousy turned out to be unconscious suspicion?) Ryan had a number of very funny bits of business throughout the season, like the erotic Scrabble game Charles and Jan played in the Theo spotlight episode, or the pleasure she took in saying the word “circumstantial” while sitting in on a podcast brainstorm session. So even though Jan was the most likely suspect once Teddy was cleared, her probability as killer wasn’t so glaring throughout the season that the revelation seemed obvious when it came. And the details of why and how she killed Tim fit neatly with what we already knew about her, the building, and the case.

(*) Sting, playing himself, was cleared of suspicion many episodes ago, but the finale featured an amusing call-back to his presence in the building, when the Siri on Charles’ phone mistakenly played Sting’s “Fields of Gold” when he was trying to get help.

The sequence where Jan reveals her secret to Charles neatly summed up the show’s ability to play for comedy and suspense, often at the same time. On the one hand, there’s genuine tension throughout, particularly as the action cuts away to Oliver and Mabel discovering the knife Jan used to stab herself (to avoid suspicion) in a recent episode. And Charles even gets to embody his old cop-show alter ego Brazzos when he reveals he’s been taking stage sips of the presumably poisoned drink Jan has given him. On the other, Jan reveals that she had already poisoned him with her handkerchief, leaving Charles paralyzed while she prepares to kill everyone in the whole building. This is both a threat and an opportunity for some marvelous slapstick from the 76-year-old Steve Martin (making like he’s still at his physical comedy peak circa 1984’s All of Me) as Charles has to roll and otherwise contort his way out into the hallway and onto an elevator, where the other tenants ignore him because they’re fed up with all this weird podcasting business. The successful blend of tones continues all the way through the climax, where Mabel and Oliver foil Jan’s unhinged plans while Charles attempts to recite some triumphant Brazzos dialogue, only for it to come out of his impaired mouth as gibberish. (Oliver instead delivers a Brazzos catchphrase, while Mabel punches Jan with the ring Zoe once wore.)

The wrap-up is so tremendous, it’s almost easy to forget that the series began with a flash-forward(*) to Oliver and Charles discovering Mabel kneeling over a dead body that was likely Oscar’s, based on the distinctive hoodie the corpse was wearing. Or, for that matter, that another episode ended with a flash-forward to celebrity podcaster Cinda Canning (Tina Fey) recording a show about our heroes that she had titled Only Murderers in the Building. Had those scenes not existed, and had all involved not wanted to make another season, Martin, Hoffman, and company easily could have wrapped things up with these 10 episodes and gone on to do other things.

(*) Yes, most shows that begin in medias res and then jump back are incredibly annoying. This one just happens to be good enough to get away with it.

But Hulu announced a renewal midway through what the streamer claims was a very highly-rated season, and after wrapping up the Tim Kono business, the finale finally returns to those teases. The body is not Oscar (who didn’t deserve such a cruel fate so soon after getting his name and record cleared), but Bunny (Jayne Houdyshell), the imperious head of the building board, who had previously tried to evict our heroes. Mabel insists she just opened the apartment door and stumbled across the body, but the cops — including the once-skeptical Detective Williams (Da’vine Joy Randolph) — turn up to arrest all three of them, while Cinda begins recording this new podcast (with a title she stole from her assistant) during the perp walk outside.

Like HBO Max’s The Flight Attendant last year, this finale neatly served multiple masters, in terms of both style and substance. It was funny (see also Jane Lynch’s great guest turn last week as Charles’ longtime stunt double), it was taut, and it did a strong job concluding one mystery before setting up the next. In the penultimate episode, Oliver announces that he wants the conclusion to their podcast “to be better than The Jinx guy confessing in the pisser.” The Only Murders finale may not have quite lived up to that, but it came a lot closer than a fictional comedy has any business doing. This was one of the best things on TV this year, from beginning to end.

Below Deck Mediterranean cast: Why did Nico Scholly leave yachting? What is his job now?