Warning: This post contains spoilers about the season one finale of Disney+/Lucasfilm’s Obi-Wan Kenobi

The season finale of Disney+/Lucasfilm’s Obi-Wan Kenobi wrapped up its six episode running-arc at what was 4 hours and 40 minutes in its entirety since May 27.

You could essentially say that’s a very long Star Wars movie; 2017’s Star Wars: The Last Jedi being the longest at 2 hours and 32 minutes.

Yes, hands down, this was a substantially improved series compared to The Book of Boba Fett, which had all its mojo stolen by The Mandalorian, living in that series’ shadow. And there were some intriguing elements occurring here in the franchise post 2005’s Star Wars: Episode III – The Revenge of the Sith.

The early swashbuckling days of little Princess Leia Organa was quite charming, however, how lame is it that she becomes the princess who’s continually kidnapped by the Imperials? Surely, she can’t get kidnapped again before she’s taken hostage by Darth Vader and her planet Alderaan blown to bits. If Lucasfilm has that in the cards down the road, does Princess Leia fall in love with her Imperial captors ala Patty Hearst?

However, the constant risk for Disney and Lucasfilm in expanding the classic character backstories of the Star Wars universe is that franchise architect George Lucas, at least on screen, didn’t go to the well often enough unlike Star Trek which was relentlessly tapped since its onset.

For decades, Star Wars fans have been stuck in their rigid ideology of what works, doesn’t work and remains proper, in a universe that has a lot of blank holes. When Disney begins to fill those gaps, say with the backstory of Han Solo or Obi-Wan, it requires a very steady hand, and it’s an impossible task to make everyone happy.

What aggravates fans the most? When canon is broken or fudged with (i.e. ‘Han shot first’), and Obi-Wan Kenobi does bear some guilt in that. More on that later.

The only upside here for Disney is that any shortfall of success in a Star Wars TV series, i.e. low viewership, can be hidden, versus the public scrutiny of a box office upset (Han Solo: A Star Wars Story displeased the masses and wound up as the lowest grossing film in the franchise with $213.7M domestic, $392.9M WW).

So what tried to move the needle forward here in Star Wars lore in the Obi-Wan Kenobi season finale? Darth Vader was rather one-note obsessed in chasing down his old master for nothing more than revenge whereas in Empire Strikes Back his pursuit of Luke was the mere fact that it’s his long-lost son. Was Darth angry that Obi-Wan split his body in two back in Revenge of the Sith? Or is it just about good and evil? Or the taxation of trade routes? What was the point of seeing Darth Vader and Obi-Wan fight again in a lightsaber battle –the aorta of the finale– that sees the latter buried momentarily beneath a pile of boulders? I would say the arc here in Obi-Wan Kenobi is this old Jedi regaining his strength after hiding out in the desert during an Imperial Jedi purge. Ben damages Darth Vader again, slaying his helmet and breaking the control box on his chest. Ben sees Anakin’s face, and calls out his name, and apologizes. “You didn’t kill Anakin Skywalker,” Darth Vader booms, “I did.” And then in a play on a line from Luke Skywalker in Return of the Jedi, Obi-Wan responds, “Then my friend is truly dead.” Well, duh. We knew that all along.

But what now for Obi-Wan? It’s back to being a hermit in a Tatooine desert cave until the events of the 1977 film occur. 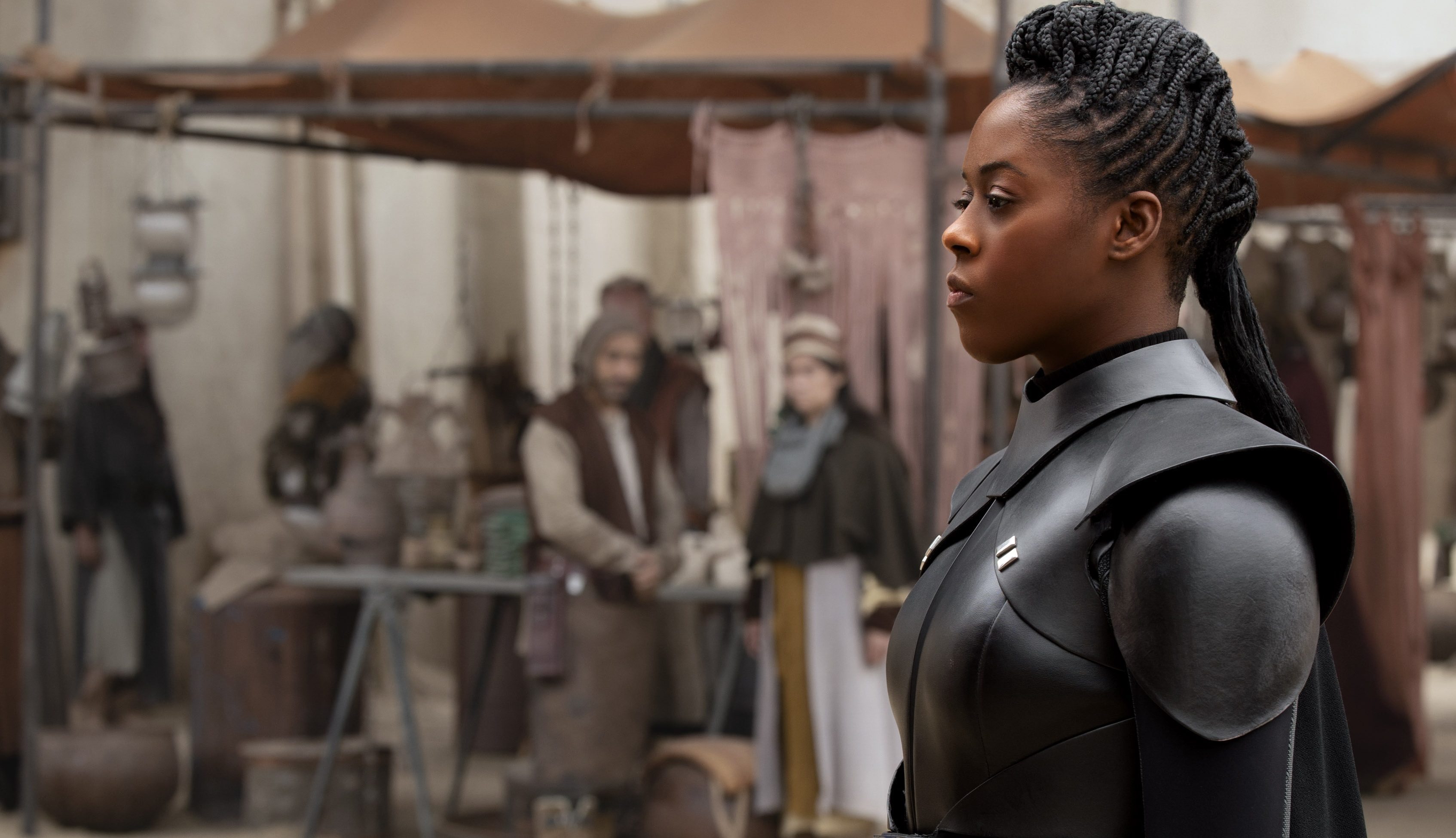 We had a sense at the end of episode 5 that Imperial Inquisitor Reva would survive when she reached for that comlink, thus learning the whereabout of Luke. She was clearly headed back to Tatooine to nab the kid. Seeing Uncle Owen with a laser rifle shooting after the Third Sister was a bit much: He’s a farmer, not a fighter, and has had no business in fighting evil space people. When we first meet Uncle Owen and Aunt Beru in the 1977 film, they’re peaceful folks in the middle of nowhere. They’re massacred by stormtroopers. Now Owen in his early days has the cajones to take on a dark Jedi with a blaster. Go figure.

What’s redeeming here in Reva is her transformation to the light side. She’s moved enough as she approaches young Luke in the Tatooine rocks, to see herself when she was victimized during Order 66. That’s when Anakin and the clone troopers raided the Jedi Temple and killed the younglings; little Reva’s life spared because she played dead as we saw in flashbacks on the show. Reva carries Luke’s body back to Obi-Wan. “You haven’t failed them by choosing mercy,” Obi-Wan tells her. She throws her saber in the sand. “Now you’re free,” Obi-Wan says. It’s a nice moment. Typically when dark Jedis have turned to the light side, i.e. Vader and Kylo Ren, it’s moments before their deaths. If they keep Obi-Wan Kenobi going, it will be interesting to see how Reva lives in the light and her struggle to keep up with that.

Two big cameos in the episode are Ian McDiarmid’s the Emperor and Liam Neeson’s Qui-Gon Jinn force guest. The latter is a but a blip at the end, and something fans were dying to see for quite some time. “Come on,” Qui-Gon tells Obi-Wan as he walks along with him in the desert. “We’ve got a long way to go.” Where were you Qui-Gon Jinn earlier in the show? You could have been Obi-Wan’s only hope.

Great to see the Emperor, but what did his conversation with Darth Vader on Mustafar accomplish? “You seem agitated,” the Emperor teases Vader, as if the cyborg guy still has feelings for Obi-Wan. “Kenobi means nothing,” Vader retorts.

Leia is of course back with her adopted parents, donning Tala’s holster (given to her by Obi-Wan earlier in the finale) and sporting sharp brown battle boots. It’s a junior variation of the Princess Lea from the original trilogy. She’s got a lot of spunk after her latest adventures with Obi-Wan, but we know she’ll get captured again.

But unfortunately, Lucasfilm winds up re-writing Star Wars legend in the end. The 1977 film left the impression that it was the first time Leia had an encounter with the enigmatic Obi Wan. We had zero clue that she was galivanting with him around the universe as a child.

Ditto for Obi-Wan’s encounter with Luke, which occurs at the end of the season finale. Owen gives the go-head for the old Jedi to finally introduce himself to the boy. The series spent the entire season ensuring that Obi-Wan and Luke would never meet in being faithful to Episode IV; he would only look over the boy’s welfare from a distance in the desert. Until now after Ben gives Luke a toy T-16 skyhopper which we see his older version in the first Lucas-directed movie play with.

True, the interaction opens up more opportunities for Obi-Wan and young Luke to go on adventures in season 2, should that occur. But why mess with the original Star Wars commandments? It’s more clever to write around the rules.

Surely, Obi-Wan had more important things to do in the desert before coming into the much older Luke’s life.

What was Louie Anderson's net worth?

NCIS: New Orleans Season 6 release date: When does show come back on TV in fall 2019?