Writer-director Park Chan-wook has long been a favorite of cinephiles thanks to the combination of meticulously controlled craft and boundary-busting shock value in films like “Oldboy,” “Lady Vengeance,” and “Thirst.” With his Best International Feature–shortlisted romantic thriller “Decision to Leave,” however, the auteur leaves his penchant for taboo-breaking behind in favor of a subtler approach that paradoxically yields his boldest and most original film yet. The story of a detective (Park Hae-il) who falls deeply and tragically in love with a murder suspect (Tang Wei), “Decision to Leave” is a hypnotic reverie of longing, obsession, and regret in which the characters are constantly hiding things from themselves, each other, and occasionally the audience — which required precisely adjusted cinematic effects from Park and his collaborators.

“People in modern films tend to be very honest with their feelings,” Park told IndieWire, “and honesty is considered an ideal in our society. But there are certain circumstances and situations in which that is not quite the case, and I wanted to tell a story of people who are in a situation in which hiding your emotions and not being honest was the right virtue at the time.” The trick was figuring out how to convey to the audience what the characters were feeling without them giving their emotions away to each other; otherwise, said Park, the audience would lose interest. “I think the fun of the movie is that the characters don’t know their own emotions or the emotions of each other, but the audience may be able to identify the smallest tremble of a pupil and figure these things out.”

In order to orchestrate the complex interplay of looks and gestures that would define the doomed romance at his film’s center, Park storyboarded the entire film and gave a book of the drawings to his collaborators. “By reading this sort of comic book, the actors are able to perform with the knowledge of which dialogue will be in a close-up, which will be in a POV, and how their emotion continues into the next shot,” Park said. Yet as detailed as the storyboards are, they lack the delicate rhythms that are vital to the film’s impact. “The drawings don’t have the information of how many frames each shot is supposed to be. All of those decisions are made in editing.” Indeed, “Decision to Leave” makes exceptionally elegant use of POV shots to let the audience in on the characters’ thoughts by showing what they’re looking at and for how long — and by showing when they’re trying to avoid being caught looking.

To illustrate these subtleties Park called on his longtime editor Kim Sang-bum, who felt that the more familiar thriller and romance elements in the screenplay gave him space to focus on the intricacies of the performances and the contradictions at the heart of the central relationship. “It’s a very familiar story when you look at it,” Kim said. “So familiar that there are some aspects that we skim over or skip because love is everywhere and it’s something that we feel we know.” For Kim, the challenge of editing the piece came in the characters’ lack of self-awareness. “It’s not like they’re hiding their true feelings from each other intentionally. It’s that they don’t know. They realize it in hindsight, at the end of the film.”

In a sense, the fact that the characters don’t understand what is happening to them until long after the fact leaves both them and the audience trailing behind the narrative throughout the film’s running time. “You don’t follow the characters side by side,” Kim said. “You look at the traces that have been left behind and try to complete the puzzle on your own, which is exactly what the characters do. They’re trying to figure out what they’re feeling and the essence of love, but they can’t do that while the event is unfolding. They do it by looking back and picking up the pieces. When the big realization occurs at the end of the film, I had to make sure that the characters and the audience would be aligned and have that realization at the same time.” 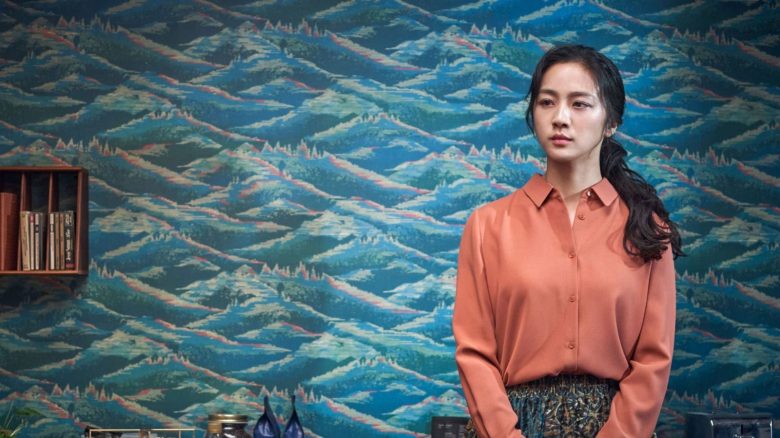 Another key component in conveying the repressed emotions at the heart of “Decision to Leave” is the music, which was composed by another frequent Park Chan-wook collaborator, Cho Young-wuk. Initially, Cho thought his music would follow a more traditional path than it ended up taking. “When I first read the script I thought it would be a very traditional noir,” he said. “I thought my music should follow or amplify the events of the investigation. But after I saw a rough cut, I realized it was more of a romance than a noir, and that my music should focus on the emotional tension between the characters rather than reinforce the development of the story.”

To that end, Cho largely eschewed big orchestral themes in favor of woodwinds and solo string performances that he felt would convey both the isolation and the deep underlying passions of the characters. “It was very different from projects like ‘Oldboy’ or ‘The Handmaiden,’ where the characters’ emotions are at the forefront,” Cho said. “‘Decision to Leave’ is quite the opposite. Nothing is at the forefront, everything is hidden. So in ‘Oldboy’ and ‘The Handmaiden,’ the emotions are like a car that’s driving really fast on the expressway. ‘Decision to Leave’ is more like going through a convoluted maze. As time goes by the characters get to know each other little by little, and that slow and unsaid process has to be expressed by my music.”

Park noted that while he wanted the music to be slightly dry so that its understated emotional quality would match the energy of the characters, he also knew he needed to bring humor into the film to avoid keeping the audience at too great a remove from the material. “Humor is one of the most important elements of filmmaking for me,” the director said. “But you have to find the adequate amount of distance, because if you’re too far away from the characters the humor can become cold and cynical. I always want the laughter to be sympathetic.” Park and his team had more time than usual to fine-tune these nuances thanks to the COVID pandemic. “It was obviously a tragic event for the world, but it meant we didn’t have a set release date and could work in post-production for a very long time.” The result was a film of both remarkable complexity and economy, in which every shot is calibrated to be both precise and open-ended, allowing for multiple interpretations that reward repeat viewings. “That’s why I think it’s important to watch the film in a theater,” Park concluded, “because only when you’re paying full attention to the film can you notice the details.”

How old is Andy Garcia and what's his net worth?