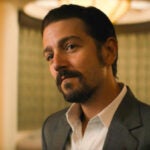 “Narcos: Mexico,” a spinoff of the original “Narcos,” hails from Gaumont. The O.G. “Narcos,” from Miro, Bernard and Chris Brancato, was set and filmed in Colombia. It was based on the story of drug kingpin Pablo Escobar (Wagner Moura), the leader of the Medellín Cartel. In addition to Moura, the series also starred Boyd Holbrook and Pedro Pascal as the DEA agents who hunted down Escobar.

The third and final season of the show will launch Nov. 5 on Netflix.

The TVLine-Up: What's New, Returning and Leaving the Week of July 5