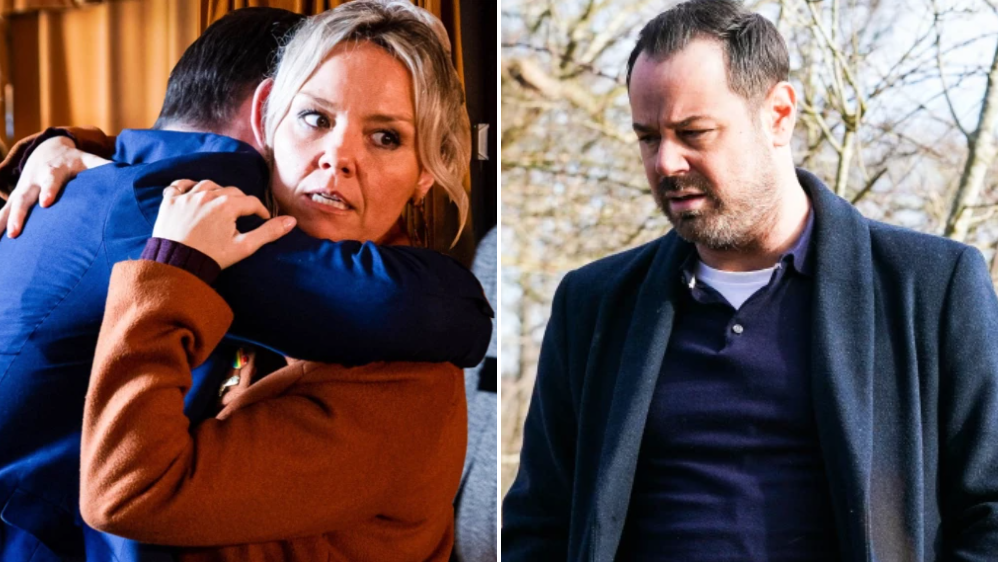 Danny Dyer’s exit from EastEnders was always going to be explosive, and now the stage seems set for Mick Carter to die in stunt packed Christmas episodes.

The cast of the soap are currently filming the big weeks of the festive season, which are traditionally massive for EastEnders, and new soap boss Chris Clenshaw is going all out for his first Walford Yuletide.

It has been known for some time that Danny is leaving his role as Mick, with the actor himself seemingly keen to be killed off in memorable scenes.

He may be getting his wish, if these scenes are anything to go by.

At the moment, Mick is estranged from wife and soulmate Linda (Kellie Bright), as he looks to the future with pregnant partner Janine Butcher (Charlie Brooks).

Cunning Janine will do anything to keep her claws into her man; and that has meant framing Linda for a car crash that almost killed her – and then trying to have Ollie taken from her.

Despite her attempts to get rid of the landlady, Janine has failed to completely extinguish the spark between the Carters.

So, should Mick ever find out about her lies, the whole relationship will likely fall over a cliff and crash on the rocks below.

Funny you should say that.

Pictures from location filming, obtained by The Sun, show intense scenes between the trio, with a car crashing over the edge of a cliff.

Mick is then seen plummeting over the drop; so is this the end of him? Is he diving to save Linda or Janine?

May Janine have orchestrated the whole thing and be intent on killing Mick and Linda?

Another notable development in the pictures is that she appears to get away from the disaster unscathed, as he flags down a car and flees the scene. Has she left Mick and Linda to a terrible fate as she strikes again?

The exact details of the storyline are yet to be filled in, and EastEnders is remaining tight lipped when approached for comment by Metro.co.uk.

An EastEnders insider told the publication: ‘Bosses are staying tight lipped about the exact nature of Danny’s exit but there’s no way his character would go out without a bang.

‘Exact details are being kept top secret but the show is pulling out all the stops to make it an explosive ending, which will no doubt leave the residents of Walford reeling.’

It is set to bring about a stunning final chapter to Mick’s story, however – with the height he is falling, there is every chance he may not survive this.

Back in June, Danny spoke to Metro.co.uk about his upcoming exit as Mick Carter, a character he’s played since 2013.

‘We’re still in debate about how I’m gonna leave’, he told us at the British Soap Awards.

And, while it was always believed that Mick would not die, it sounds like it may not be as off the table as we think.

‘It may be that we never see Mick again,’ Danny said.

‘It’ll be an epic ending. It’ll be huge. And I think I want to put a full stop on the job, and I think it’s been an amazing 10 years I’ve had, I’ve loved every minute of it.’

That said, another Walford alpha male was thought to be dead in another infamous exit – Grant Mitchell seemed doomed when his car plunged into the Thames.

However, he was later given a follow-up scene departing safe and well at the airport.

But one worry that remains with fans is that Mick would never leave Linda behind unless he was forced to.

Surely only prison or death would tear him away? Unless, of course, Linda may be set to leave with him.

But another answer we can give is that Janine is also not long for Walford, with Charlie also filming her last scenes after an 18 month stint.

Discussing saying goodbye to Janine once more, Charlie told The Sun, ‘I was only ever due back to EastEnders for a year. But when [exec producer] Chris Clenshaw presented me with his idea for the story, I couldn’t say no to staying a little longer.

‘I’ve had an amazing time, as I always do when I go back.

‘But as always with Janine, she probably should not outstay her welcome — for everyone’s sake.’

Sid Owen is reprising his role as Janine’s brother Ricky too; which boss Chris promised Metro.co.uk would feed into a cataclysmic ending for the storyline.

‘Ricky is coming home and his sister Janine is in a relationship with Mick and we’re building to something really climatic between them,’ he revealed.

‘Janine has got her everything finally in Mick and the Vic, but we all know how strong the bond is between Mick and Linda and what they have runs very deep.

‘But we know what Janine is like and what she is capable of and the paranoia sets in. I won’t give away how Ricky comes back but it plays into the Janine story.’

The scenes being filmed are expected to air across the Christmas and New Year period.