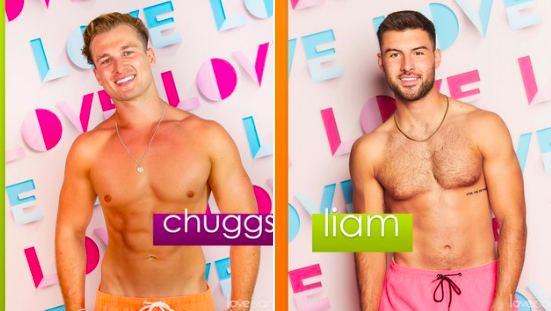 Love Island 2021 is mixing things up with new contestants, welcoming two new boys into the villa from Thursday.

Chuggs Wallis and Liam Reardon will be hoping to making a big impression on the programme, after having their arrivals teased at the end of tonight’s episode – which saw Shannon Singh leave in shock scenes.

Chuggs, 23, from Surrey is a bucket hat salesman, who says he has no problem breaking up couples – so, look out for the drama over the coming days.

Speaking about what he’s looking for a girl, he said he’s after someone who can be his ‘best mate’.

‘I need someone who is going to muck in with my brothers, my family. I’ve got a mate who has a girlfriend, she plays rugby, golf… everything with us. She’s great, she gets involved. I want something like that.’

He also said Liberty, Chloe and Faye have caught his eye so far.

Liam is a 21-year-old bricklayer from Wales, and admitted that he signed up to the show as he was ‘struggling to find a girlfriend’.

Speaking about who has caught his eye so far, Liam added: ‘I think Kaz is really good looking and has a great personality. I’m looking forward to getting to know her.

‘And Chloe – I like her confidence and I’m intrigued to see what she’s about.’

It follows the most dramatic episode of the series so far, which saw Shannon dumped from the villa in a shock eviction.

Chloe was tasked with picking one of the boys and picked Aaaron Francis, meaning Shannon was sent home.

It’s the most brutal start to a series ever – especially as single islanders are usually given a chance to steal back a partner before leaving the villa.

Andrew S. Reveals If He's Still Open to a Relationship With Katie

This Marvel Actor is Married to 'Dirty Dancing’s' Jennifer Grey