“We know the fallout out of the battle [with the Shadow King] is terrible,” Lloyd tells TheWrap 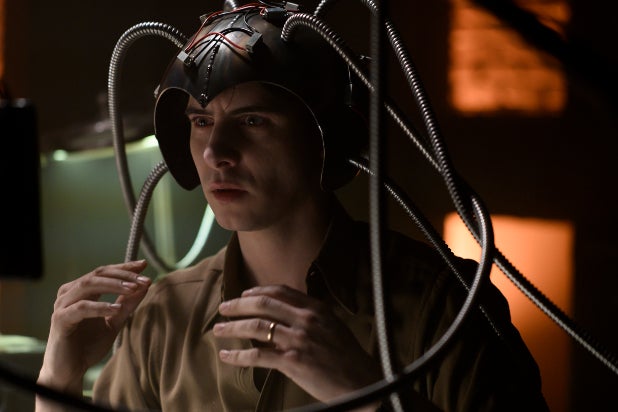 Though there are a few small details that X-Men fans would know (beta model Cerebro anyone?), the Charles Xavier that viewers see on “Legion,” is far removed from Patrick Stewart and James McAvoy.

For starters, he essentially abandons his wife in the opening scene to go to Morocco to find the Shadow King, aka Amal Farouk, which ends up being a colossal mistake.

“I’m not even entirely sure at this point what Charles’ intentions are. Does he want to attack this mind, does he want to befriend and help him?” Harry Lloyd, who played the famous mutant, told TheWrap. “The way we play that leading scene he kind of abandons his wife. And that was very purposely done so you don’t think Charles is the hero. Because we know the fallout out of the battle is terrible, and he ruins the life of a young baby.”

David has spent the first few episodes searching for, and then recruiting, a time traveler, which he gets with his new friend Switch (Lauren Tsai). In Monday’s episode, we learn just exactly where David wants to go back to: When the Shadow King first infected his mind after losing a metaphysical battle with Xavier. But he and Switch are relegated mostly to watchers in a “Christmas Carol”- esque fashion. Until the very end that is, when David briefly starts to break through, before dear old dad kicks him out, unaware Farouk is about to take up residence in his young baby’s mind.

In what was likely his first test run of his mutant-tracking Cerebro helmet, he finds Farouk, who also happens to be the first mutant he knew of besides himself. Lloyd said that pull was too hard for him ignore.

“I think the first thing is that someone else exists like him, he’s not this one-off freak. Suddenly the world opened up to him,” he said. “There’s also something slightly nightmarish about him. He’s someone that he cannot erase, and whether he wants to help this person originally, he sees someone like himself, who also has huge power.”

“Legion” creator and showrunner Noah Hawley said that, even though “Dark Phoenix” was coming out a month before, he didn’t have to cut through any corporate red tape with 20th Century Fox to use Xavier.

“We’re going to have to meet [David’s] parents eventually. Nobody fought us on it. There was a question obviously about what age is he? What’s the model? Is he the McAvoy age? Is he Patrick Stewart age? Should we try to get either of those actors to do it?” Hawley explains. “Ultimately, I felt like we established our own alternate reality here on ‘Legion,’ where it’s both 1964 and the future… I think I felt like the younger Xavier was actually more consistent with the timeline. But there’s something about David, if David meets his father and his father is his age, I think there’s something interesting about that.”

Like David and Syd, Charles and Gabrielle Haller first meet in a mental institution, another strong departure from the Professor X most viewers are used to. But this is a war veteran who uses his powers in a very traumatizing way.

“I always think that he, however strong his powers at that age were expressing themselves, but they were something that he wanted to do some good. And I think that Gabrielle allows him to do that. I think that he used it, the mind [to kill the enemy solider]. I think it opened himself up and he became scared of it. I don’t think anyone would know what happened in that tunnel besides you… Part of me wonders if he committed himself, or if he allowed himself to be brought there because he kind of has become lost.”

Adds Hawley: “The story from the comics is that he met Gabrielle in an institution and helped get her out of a catatonic state, and it was interesting to the degrees that it paralleled David and Syd’s story, and I wanted to look at that.”