Warning: The following contains spoilers from Wednesday’s Legends of Tomorrow finale. Proceed at your own risk!

Legends of Tomorrow wrapped up Season 7 with three major events, including a highly anticipated character’s introduction to the Arrowverse.

While trying to prevent Alun’s death, which is a fixed point in history, the Legends came across a fixer from the future by the name of Mike (played by Scrubs vet Donald Faison). He stole their Waverider and blew up the time machine, but later returned — in handcuffs. Mike then revealed his well known comic book moniker, Booster Gold, and told the team that they were all being arrested for time crimes.

Prior to that major cliffhanger, Nate bid farewell to his friends after losing his superpower (more on that exit here), and Sara found out that she’s pregnant with Ava’s baby, who has absorbed Sara’s healing ability. (#AlienBiology #DontAskQuestions)

Below, co-showrunner Keto Shimizu talks about Booster Gold’s Arrowverse debut, Sara’s baby news and what it all means for a potential Season 8. (The series has yet to be renewed.)

TVLINE | Booster Gold is a character that fans have been speculating about and wanting on the show for a while. Why was now the right time to bring him in?
Booster Gold, obviously, is someone who’s always been kind of tied to the DNA of Legends of Tomorrow because he’s time-traveling, because in the comic books, [he has a] relationship to Rip and all of that. However, he was not on the table for us for pretty much our entire run… and DC is very [protective] about which characters get to go into what medium. So it wasn’t even something we could ask for until there were a lot of talks between us and the studio and the network about introducing a new character at the end of this season, and we asked DC about this character. We knew it was a longshot. We knew they’d probably say no. However, they talked and they had all their internal discussions and did all their equations and decided that, yes, we could use him now. So that’s really how it came about was that we knew we wanted to introduce a big character at the end of the season, and finally, we just said, “Hey, what about Booster Gold?”

TVLINE | What are you excited to explore with him if there’s another season? What doors does his character open up for you?
A lot of doors. He’s such a big personality and is the star of his own crazy movie in a way. The fact that he’s in this situation like Thawne was means that something happened before to get him into that particular location. And also, he’s just such a fun mix of selfish but also charming and humorous and certainly driven by his ego. But as with all our characters, we feel like there’s a warm, gooey center that the Legends will have a lot of fun peeling back, and likewise, he with them. He’s a kind of character who can really poke at our Legends and their perceptions of each other and themselves and maybe call them out on some of the bulls–t here and there. That’s always a really great kind of energy to bring on the ship, someone who has a very distinct point of view and who can keep everybody on their toes. 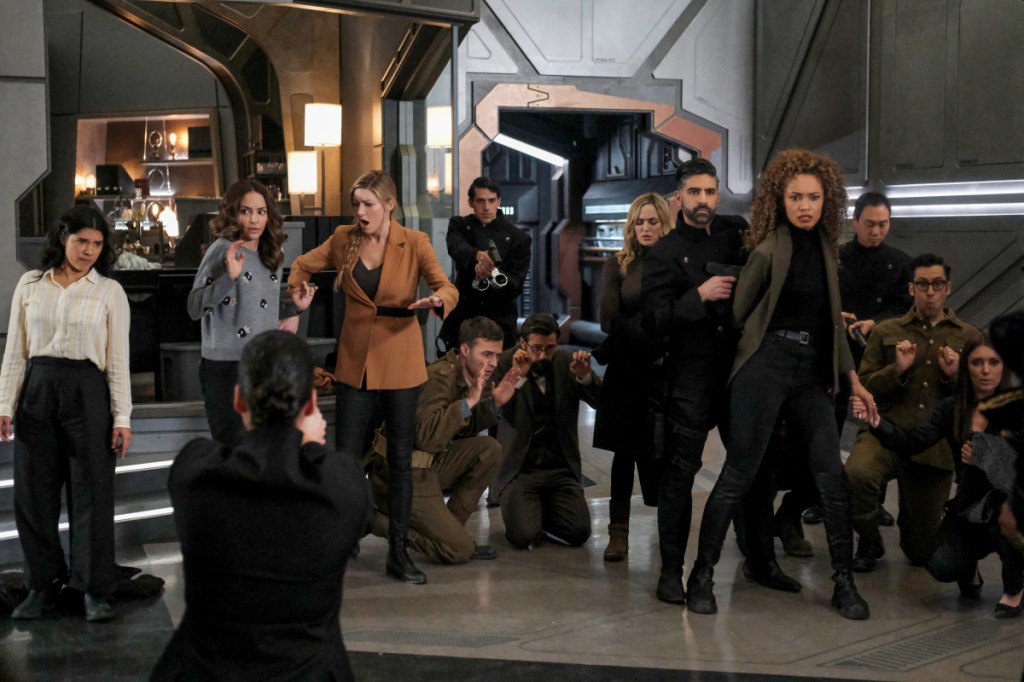 TVLINE | He comes into the Legends’ lives and ends up getting them arrested for time crimes. How’s that going to shape a potential Season 8?
Well, it’s going to have a huge impact on a potential Season 8 in that they’re going to be in jail. [Laughs] Every season is something new. We’re going to find out more about this organization that has put all the fixers in all these different places and find out what happens when you commit too many time crimes.

TVLINE | You’re on your second half-alien pregnancy now, but this time, you have your main, butt-kicking character pregnant and mortal once again, and you touch on the dangers of that in the finale. But how does that change the show moving forward?
We wanted to make sure that there were real stakes for Sara and her changing body. This is something that happens when women get pregnant is they suddenly feel like they lose all this control and all this autonomy and and they do fundamentally change… We really wanted to throw Sara into a situation that we think will provide some good stories for the next season, if we get one.

TVLINE | This is a big step for Sara and Ava, and especially for Sara, who’s come such a long way from when we first met her on Arrow. Can you talk about where you hope to see their relationship go next season?
We really wanted this for them. It felt like they already are parents because they’ve had to be moms to all these grown-ass adults on their ship for so long. It felt right that now they would have to face the challenge of a real small person who is completely dependent on them…. Parenthood has been a long time coming for these two, and in a way, it’s already been happening.

Legends fans, what did you think of the season ender? Grade it below, then hit the comments!