Kate discussed her husband Derek’s wellfare during a heated debate about President Donald Trump’s own battle with coronavirus. The President sparked controversy earlier today after leaving hospital to wave to fans from the confides of an SUV, despite only being diagnosed with COVID-19 in the past few days. Trump’s decision to leave isolation sparked uproar with Piers Morgan and Susanna Reid on the GMB panel and led to Kate’s revelation about her family.

Derek was diagnosed with COVID-19 back in March 2020 when he was hospitalised after contracting the virus.

Kate’s husband was placed in an induced coma and although he opened his eyes, he remains in a serious condition at the hospital.

The GMB host has candidly discussed his welfare numerous times over the past few months and his health became the centre of debate today as Kate slammed President Trump’s behaviour.

Kate told Piers and Susanna: “Derek still hasn’t been allowed, even though he’s no longer tested positive for the virus, to – children can’t visit.” 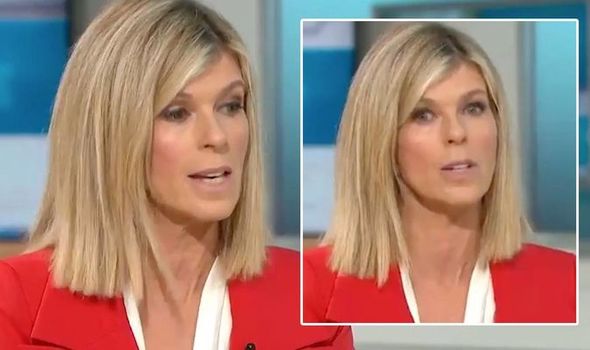 She added: “His mum and dad haven’t seen him, you know.

“And I personally believe that actually him having contact in that room could possibly be of great benefit, to have a physical presence.”

Susanna nodded in agreement as she commented “yeah, yeah,” before Kate took aim at President Trump.

Kate continued: “And there are children that have died with their mums and dads not being able to see them,

“So why does he think it’s more important for him to get in that car?”

Piers tried to weigh in with his opinion: “Well there are two issues -“

But Kate promptly stopped him in his tracks as she let her passionate stance continue.

“Let me finish,” she told Piers. “If he’d shown that he’d respected the people around him and respected the isolation that would’ve been a heroic message.”

“That would’ve absolutely benefited the whole country,” she concluded.

After sharing the tough news with ITV viewers, several were quick to send their messages of support to the GMB star through the tough time.

A second agreed with the presenter: “Well said Kate ! Agree your children should be able to visit their Dad , sending love and hope to you all xx.”

However, others weren’t happy with Piers’ interjection, as one added: “Once again not letting Kate speak, and then making it all about what you think. So pleased she shut you down!”

“With what Kate is living through right now no one should be interrupting her!!! Let her finish what she is saying, she has every right to get her FULL opinion out,” agreed a second.

Another fan praised: “@kategarraway has conducted herself with dignity throughout her husband’s illness.”

'The Good Doctor’ Season 3: See the Promo of Shaun and Carly's Date