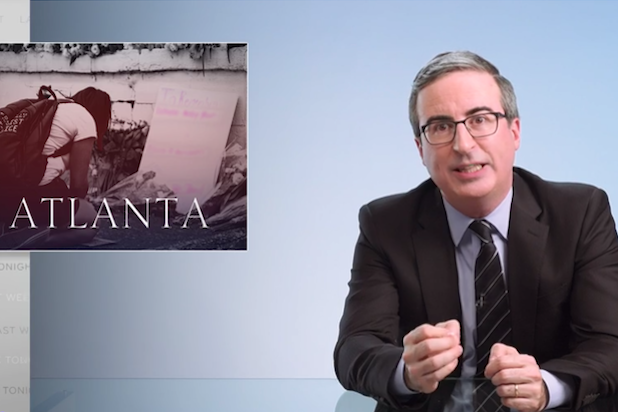 John Oliver devoted the opening moments of Sunday’s “Last Week Tonight” to condemn the mass shooting that occurred in Atlanta last Tuesday, in which a gunman killed eight people, six of them Asian women.

Oliver called the attack “the latest data point in a disturbing pattern,” noting that President Joe Biden had spoken about this “terrible trend” the week before the attack. During that speech Biden said that violence against Asian Americans is “un-American” and that it “must” stop.

“Yeah, it must,” Oliver said, after rolling clip of Biden’s speech. “And I am really glad that he condemned hate crimes against Asian Americans. But to say they are ‘un-American,’ I would love to visit the nation that exists in Joe Biden’s head because it’s a place where racism is ‘not who we are’ and racial attacks against Asians are somehow ‘un-American’ — despite the fact, and far be it for me to explain this to someone who seems like he’s lived through most of American history — anti-Asian racism has long been a fact of American life.”

Oliver went on to say that, “Not only are hate crimes against Asian Americans very much ‘American,’ so is denying that they’re racist. It’s all so American, in fact, that the national anthem could probably begin ‘O say can you see… that this wasn’t about race.’”

“Look, Asian American and Asian immigrant communities have been feeling extremely vulnerable for a long time and especially so right now,” Oliver said. “And for a group whose suffering has historically felt invisible to the media, and to the country at large, it is important that we acknowledge that pain right now. But more than that, dismantling anti-Asian prejudice should be another key part of dismantling the chokehold that white supremacy has on this country. Because, as we’ve seen since its foundation and continue to see this week, people will bend over backwards to call racism anything other than what it is. And that is, unfortunately, very f—ing American.”

The shooting took place at three separate spas — Young’s Asian Massage Parlor, Aromatherapy Spa and Gold Spa — in the Atlanta area last Tuesday night. The 21-year-old suspect, Robert Aaron Long, has been charged with eight counts of murder and homicide and one count of aggravated assault.

The suspect cited a sex addiction, not a racial motive, for the killings, Capt. Jay Baker of Georgia’s Cherokee County Sheriff’s office said during a press conference last week. After that appearance, Baker received significant backlash for saying that Long had a “really bad day.”

“OK, absolutely f—ing not,” Oliver said last night, after showing a portion of Baker’s confernece. “You do get that this is a press conference about a mass murder, right? You don’t get to minimize what happened like that. ‘Really bad day.’ Alexander had a ‘Terrible, Horrible, No Good, Very Bad Day’ and what he did was shrug it the fuck off and go to bed while managing to murder zero people. That cop even went on to repeat the shooters claim that his attacks weren’t racially motivated and instead his ‘sexual addiction’ was to blame for the killing, which already feels like a weird distinction to be making. ‘Hey, I might be a mass murderer, but watch who you call a racist, buddy. Words hurt!’ And while it is still early, details are still coming out, and authorities seem unwilling to call this a hate crime, I will say, a white man driving across two counties, going to three Asian-owned businesses, shooting and killing six Asian women in a city that’s only about 4% Asian sure as shit seems more like a hate crime than a bad f—ing day.”

Matt Bomer Is Talking About Bringing White Collar Back