Piers Morgan, 53, and Susanna Reid, 48, were joined by Foreign Secretary Jeremy Hunt, 52, on Good Morning Britain today after he was revealed as one of the final two candidates vying for Prime Minister.

Having declined their invitation to appear on the show on numerous occasions, Hunt’s competitor Boris Johnson, 55, was set to be the starting focus of Morgan and Reid’s interview with the Foreign Secretary.

After speaking with political journalists Andrew Pierce and Kevin Maguire ahead of the interview on the Good Morning Britain, Reid welcomed Hunt to the show via a live link.

Appearing from a location away from the studios, Reid welcomed Hunt and said: “Very good morning to you Mr Hunt. It’s very good to see you.”

Hunt replied: “Good morning Susanna,” but before the interview could get underway, Morgan interrupted the pair to ask why the Prime Ministerial candidate hadn’t spoken to him.

Morgan exclaimed: “What about me?” with the interviewee breaking from his formal stance to give out a little laugh in response to the presenters reaction.

Reid told Hunt: “Piers Morgan is here and feeling hurt already,” as the presenters and interviewee laughed off the humorous moment.

The interviewee did then acknowledge Morgan before Reid began questioning the Prime Ministerial candidate.

After the stumbled start, the Conservative leadership candidate went on to discuss issues such as Brexit and his open views on abortion laws. 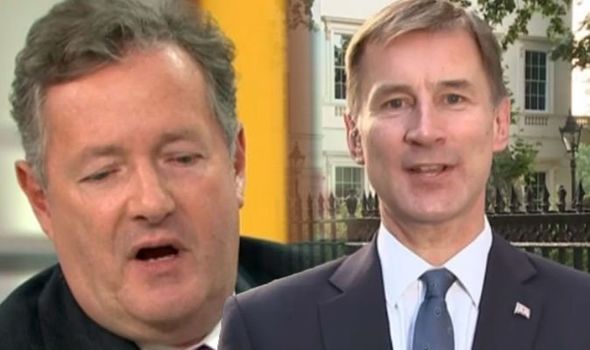 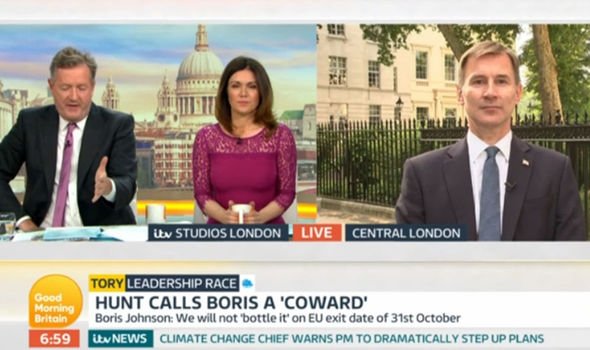 As one of the MP’s who voted to remain as part of the European Union, Hunt explained he would still try to get a deal to leave if he were instated as Prime Minister.

“Well I’m like millions of people who voted for remain who just want to get on with this,” Hunt began before adding: “In the cabinet, I was the one who said we needed to get better deal.”

Hunt added: “Sometimes in politics you can fudge and get away with it but with Brexit, you need to get on with it immediately.”

Being pulled up on going through with deal despite his original stance on Brexit, Hunt compared himself to his competitor as Johnson has also changed his stance on several occasions.

The Foreign Secretary remarked: “I’ve been much more consistent on Boris than this,” before hitting out at Johnson for his reluctance to take part in interviews and debates. 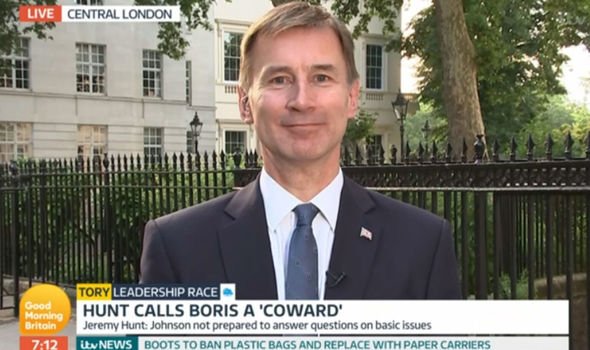 Asked on his views regarding abortion, Morgan said to Hunt: “Why is it your view the law should be reduced, halved from 24 weeks to 12?”

Hunt replied: “It would be fine to get into that discussion if it were something I wanted to change as Prime Minister but I don’t.

Morgan went on to ask: “Isn’t the strange, the guy who wants to be Prime Minister has this view but won’t explain why he has it?”

Responding to the presenter, Hunt said: “Well, he’s on your show, he’s answering your questions about it, he’s been very honest about what his view is but he’s also saying he’s not going to be changing the law as Prime Minister.”

On last weeks show, guest entertainment reporter Joe Swash, 37, jokingly stormed off the set of the show after host Ben Shephard, 44, made a quip to the presenter.

5 of Bernice's most iconic moments from a bonkers Emmerdale episode