Below Deck charter guest Charley Walters may appear on Below Deck Mediterranean Season 6, but can fans handle another appearance from him?

Charley just wrapped up his third stint on Below Deck. Fans have expressed their dislike for the demanding guest and his over-the-top friend group. If Charley does pop up on the hit yachting show or spin-off, viewers will likely be less than thrilled.

What got the Below Deck Med rumor mill buzzing?

The fan backlash has prompted Charley to be extremely active on social media. He has been live-Tweeting throughout each episode he appeared on during Season 8.

Charley has spent a significant amount of time defending his behavior. He even claimed his actions were based on what producers wanted from the group.

Captain Lee Rosbach has made it known he is a big fan of Charley. A recent Tweet by the famous captain saying Charley will always be welcome on his boat got the Below Deck Med rumors buzzing.

Charley suggested that perhaps Captain Lee might be ready to turn him over to Captain Sandy Yawn. He then joked that Captain Sandy was not ready for Charley and that he just might sink her ship.

It turns out Captain Sandy wasn’t overly thrilled with Charley’s words. She let him know she doesn’t sink ships. 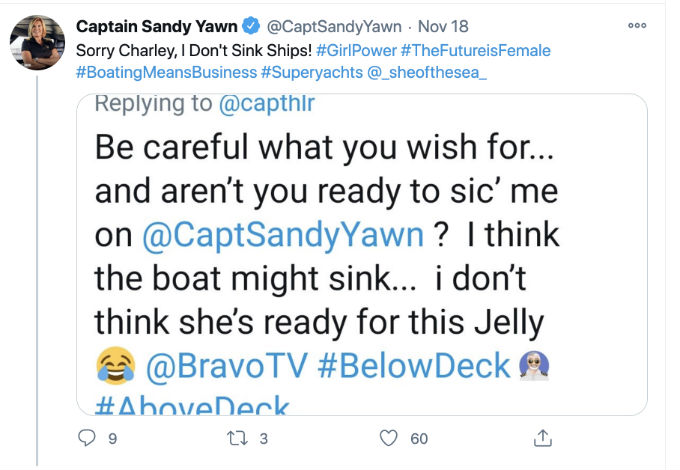 Charley’s not done with Bravo

Whether Captain Sandy likes it or not, Charley was not about to rule out a possible Below Deck Mediterranean appearance.

“Up for the challenge if the world isn’t completely sick of me (which I think they are) but YES to #GirlPower AND more @BravoTV B.D. Diversity… I tried to bring guests celebrating many rainbow colors, including my gorgeous Ashley who came to Olympics dinner as TRANSylvania!” Charley Tweeted to Captain Sandy.

In her initial response to Charley, the female captain promoted girl power, which is ironic considering she and Malia White have been dubbed the mean girls of Season 5. The season featured all women in leadership positions, but instead of empowering, Malia and Captain Sandy were nothing but backstabbing females.

Thanks to the captain and bosun, viewers were turned off from Below Deck Med at the end of Season 5. Many even declared they were done watching the show.

However, the paring of Charley Walters and Captain Sandy Yawn may just be the entertaining drama that got fans hooked on the Bravo show in the first place.

Crossover guests aren’t common on the various Below Deck series in the show franchise, but it occasionally happens. The majority of the time, repeat guests stick to one show.

Below Deck airs Mondays at 9/8c on Bravo.