Hitler goes on trial in Hunters‘ series finale and is found guilty, an unsurprising and welcome outcome to a show that is an elaborate, and understandable, World War II revenge fantasy. But another revelation that takes place in the Prime Video drama’s final hour also offers vindication for Jonah, who has struggled ever since killing Meyer Offerman, aka The Wolf, in the Season 1 finale.

What (even more terrible) truth do we learn about Meyer? And where do the hunters wind up after everything shakes out? Read on for the highlights of “The Trial of Adolf Hitler.”

THE TRIAL BEGINS | The episode opens with Hitler going on trial in front of an international criminal tribunal for crimes against humanity. Jonah and the rest of the hunters are in the audience. Meanwhile, outside, white supremacist demonstrators chant “let him live!”

At one point during the legal proceedings, the prosecution calls several Holocaust survivors — including Mindy — to the stand. Their testimonies are horrible and harrowing, the pain and grief as fresh decades later as it was during the war. Mindy retells the awful story of how a Nazi guard shot her and Murray’s young son as they were being transported to a camp. “We were just people. But you tried to exterminate us, to make us extinct,” she says, starting to cry as she directly addresses Hitler. “But now, you are in our arena. A hall of law. You tried to bury us, but we were seeds and we grew back stronger. And our branches reach towards a light of justice. We survived to tell the story and we will never, ever let the world forget.” Hitler demands that his lawyer cross-examine her and try to poke holes in her story. The young man refuses.

Later, Hitler takes the stand, lying as he denies that he ever ordered the killing of a single Jew, much less millions. He then claims he was “vacationing” in Argentina for 30 years after the war. But when the prosecutor goads him and mocks his legacy, Hitler gets so mad that he trips up and boasts that he did, indeed, give the order for the mass killings.

JUSTICE IS SERVED? | After two days of deliberations, and despite a lead judge who is a suspected Nazi sympathizer, the tribunal finds Hitler guilty on all charges. He is sentenced to lifetime imprisonment without the possibility of parole. As the despot is led away, Jonah notices that the pen Hitler had been using during the trial has been screwed open and left behind; next thing we know, Adolf is popping a cyanide pill and collapsing as guards escort him into custody.

He’s revived and taken by ambulance to the hospital, with the hunters in close pursuit. All of a sudden, his ambulance veers off course; its driver shoots the soldiers and medic inside, shouting “Heil Hitler!” as he does so. Then he radios fellow sympathizers, who detonate a bomb that cuts off the hunters and the police from following.

THE COLONEL’S EXIT | Hitler is brought to the underground lair where The Colonel and Travis are waiting for him. After killing the driver, she berates Hitler for acting like a loon in the courtroom, then she announces that it’s time for her to take over as commander of the new reich. He scoffs. She orders Travis to kill him. So Travis pulls his gun… and offs her, instead.

“I want you to anoint me,” the young psychopath tells Hitler, telling — not asking — him that he’ll be the new leader of the movement. “People like a clear line of succession.” He brings the old man to the roof where a helicopter is about to whisk them away. But Jonah is waiting for them there, and a gunfight breaks out. Jonah takes a few bullets and is about to die by Travis’ hand when Joe shoots Travis, saving Jonah. Meanwhile, German police arrive on scene and nab Hitler as a bleeding Travis escapes by jumping off the roof and disappearing.

When Jonah comes to, he’s in the hospital, and Clara is by his bed. “I’m sorry,” he whispers as she strokes his hair. 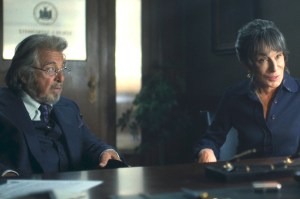 MEYER’S FINAL BETRAYAL | So how does it end for everyone? Hitler spends his days alone, in a small room, referred to by only a number. “Don’t you know who I am?!” he screams to the guards that pass by. They don’t care.

Millie gets a call that she’s going to get a Congressional Gold Medal for her part in bringing down Hitler. She immediately confesses that she was the one who killed the bishop, but no one seems to care!

Jonah and Clara marry, and he retires from the game — a fact he reiterates to Harriet when she swings by his Paris apartment with a gift one afternoon. But she’s not trying to re-recruit him: She hands him phone records from Heinz Richter’s toy shop on the night Jonah’s grandmother was murdered.

“Meyer called Richter,” Jonah says in painful resignation, putting words to a terrible truth that we saw in flashback earlier in the episode. “Meyer gave the order” to kill Jonah’s safta. Harriet lets him know that Ruth had figured out Meyer was The Wolf. “But before she could act, he got to her.” She adds that evil doesn’t rest or retire, “so why should we?” (OK, maybe she is trying to re-recruit him.)

While Jonah mulls that, the newlyweds take a honeymoon in Miami. And though they toast to new beginnings, Jonah winds up staring down an old man who’s sitting near them in a seaside café. Is the man a Nazi? Does he know who Jonah is? As the series finale comes to a close, we do not know.

Now it’s your turn. What did you think of the episode? How about the season as a whole? Grade both via the polls below, then hit the comments with your thoughts!