It’s finally time for the United States Women’s National Soccer Team (USWNT) to take the Olympics stage and possibly make history along the way, but things won’t be as easy as they hoped. Starting off in the so-called “group of death,” the USWNT is facing Sweden in their first match, the very team that caused the United States’s big loss back in the 2016 Rio Olympics quarterfinals. Plus, with the possibility of the U.S. becoming the first team to win back-to-back World Cup and Olympic titles, the pressure is certainly on.

Since the 2020 Olympics are taking place in Tokyo, Japan, there’s a huge time difference for fans back in the United States. But that doesn’t mean you won’t be able to tune in and cheer them on from your couch!

Here’s the official schedule for the United States Women’s National Soccer Team for the 2020 Tokyo Olympics.

When is the United States Women’s National Soccer Team playing at the 2020 Tokyo Olympics?

With the tournament starting off in the group stage, the team’s first four games are already set. They’ll be facing off against Sweden, Australia, and New Zealand for points. After each team has completed a game against everyone in their group, the top two teams based on the number of points they gained from the games will move on to a knockout round.

Here’s the current schedule for the USWNT:

What about the next few games?

Since the next games are determined by a team’s placement within their group, fans will have to wait until the group stage ends to find out if the USWNT will still be in the running for that Olympic gold medal. The top two teams from each group will move on to the knockout round. If they do come out in first or second, then their placement will determine who they face next. 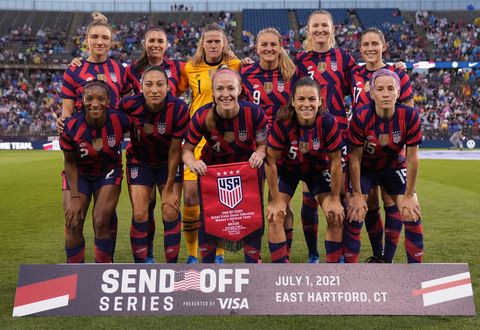 How can I watch women’s soccer at the Olympics?

There are several different ways to tune into the U.S. team matches while they’re happening. If you’re a hardcore USWNT fan and want to watch them live, here’s where you can watch them:

If you don’t want to get up early or stay up later to catch the games, then you can watch the games when they are replayed later on:

Who is playing for the USWNT at the 2020 Tokyo Olympics?

The U.S. women’s soccer team will be taking 22 players to the Olympic games. 11 members were part of the 2016 Rio Olympics team, while 17 of them were recently on the 2019 World Cup team.

In a new move, all 22 players are allowed to be called up to play before each match. Previously, only 18 players were named to the permanent roster, while four players served as alternates who only swapped in when permanent members were injured. Teams will still have to submit 18 names for each specific match, but any of the 22 players can be added.

Here are all the players in the United States Women’s National Team roster, including the teams they currently play for and their jersey numbers: