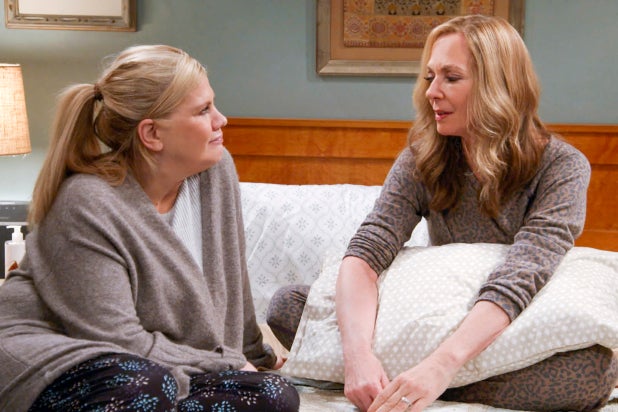 “Mom” wasted no time in addressing Anna Faris’ surprising departure from the CBS comedy, which she co-starred with Allison Janney for seven seasons.

Thursday’s season premiere opens with Bonnie (Janney) and her husband Adam (William Fichtner) having dropped off Christy (Faris) at the airport. Christy, who had been going to law school in Northern California, where the show is set, is now going to Georgetown Law School on a scholarship.

The rest of the episode jumps forward a month to show how Bonnie is adjusting to life without her daughter and roommate. Aside from a few references, mainly about how Christy is struggling with the three-hour difference in time zones (the episode ends with her calling Bonnie at a way-too-early hour). The bulk of the premiere, titled “Sex Bucket and the Grammar Police,” focuses on the slumber birthday party Bonnie throws for Tammy (Kristen Johnson).

“Mom” showrunner Gemma Baker told TheWrap that even though Faris is gone, “the character of Christy will still be part of our show as we hear updates from Bonnie about how she is thriving.”

She also added they have no plans to bring in a new co-star for Janney. “We have no plans to replace Anna because our focus is on continuing to develop robust storylines for the terrific ensemble that our audience has come to know and love.”

Faris exited the sitcom in September, leaving Allison Janney as the sole star.

“The past seven years on ‘Mom’ have been some of the most fulfilling and rewarding of my career,” Faris said back in September. “I’m so thankful to Chuck, the writers, and my amazing castmates for creating a truly wonderful work experience. While my journey as Christy has come to an end, allowing me to pursue new opportunities, I’ll be watching next season and rooting for my TV family.”

Melissa McCarthy Is Teaching Her Hilarious Daughters to Embrace Their Quirks: ‘Life Is Short, Just Be Yourself’