In historical dramas of royal courts and past imperial splendor, the camera usually lingers on a high level of conspicuous display: elegant drawing rooms, sumptuous banquet tables, and the like. One of the things that makes Marie Kreutzer’s “Corsage” so striking is the way that Kreutzer and cinematographer Judith Kaufmann visualize the rotting hollowness of the Austria of Empress Elisabeth (Vicky Krieps). The camera makes a point of moving through palace spaces without fawning over gilded furniture, using a naturalistic (bordering on sternly clinical) lighting design to emphasize the brittleness of the Austrian imperial facade. In so doing, the camera allows us to see the world through Elisabeth’s eyes.

“We were looking for a [style of cinematography] that retained the sharpness and openness of vérité, [as opposed to the style] of a traditional costume drama. Not too perfect but not documentary-style either,” Kaufmann told IndieWire. “Our focus was on depicting the imperial residences — especially the Hofburg, our main location — as a form of prison and creating a depressive atmosphere through lighting, a kind of darkness in daytime, without actually closing the curtains.” The fact that the curtains are so open and the Hofburg appears so spacious actually makes the palace even more dreadful. If this is a prison for Elisabeth, it feels enormous and inescapable, its windows like the glass of a fish bowl that really needs cleaning.

According to Kreutzer, achieving a look that highlights the empress’ emotional turmoil required starving the film of the traditional pleasures of symmetrical, overstuffed production design and gorgeous lighting, and instead emphasizing their artificial nature. The camera in “Corsage” is always eavesdropping from across thresholds, trying make spaces look “tight and uncomfortable. Not beautiful really. [Perhaps] beautiful in a sense, but not like you would like to live there,” Kreutzer told IndieWire. “I also [thought it was] important that every room or everything you would see would be behind representational things, spaces, and clothing, that everything underneath the finery would be just be very technical and practical.” One of the key examples of this is a hallway, a sort of service corridor, that physically separates Elisabeth’s apartments from the rest of the Hofburg palace. The film mines some great cringe comedy out of having everyone around Elisabeth — including Emperor Franz Joseph (Florian Teichtmeister) — pass through or linger in that corridor; although the space doesn’t contain any glaring anachronisms, Kaufmann and Kreutzer light it as uncomfortably as any dystopia, using neon to make it feel as if characters have to use “this cold airlock to get from one room to the other,” Kaufmann said.

“I always said to my production designer, ‘Let the rooms look as if the expensive furniture had already been sold,’” Kruetzer said. “[It was important] to add that layer of something ending, an empire coming to an end.”

The sense of an imminent, inevitable ending is important to Elisabeth’s immediate relationships, too. In a world where one can’t really confront their husband about the fact that he’s cheating (because he is the ruler of Austria-Hungary), fencing is about as close as one can get. The sparring match between Elisabeth and Franz Joseph plays out in an impossibly spartan, high-ceilinged palace room that looks almost abandoned. However, “even an almost empty room can convey the feeling of being under observation,” Kaufmann said. “We gave the actors freedom by lighting from outside the windows with big, bounced HMIs and from a rig made with wallbreakers, hung right underneath the ceiling. The main objective was to give Vicky the space to express the pressure under which Elisabeth lived and also the means to escape it. Often I didn’t know exactly what was going to happen next and had to follow my intuition to an unusual extent.” 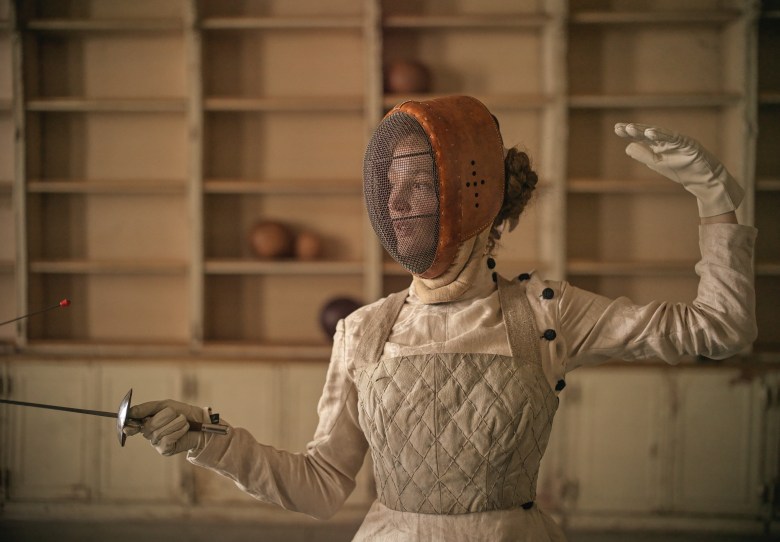 Elisabeth’s unpredictability and freedom of movement is only true up to a point, of course. She is constrained by the limits of palace life, which Kreutzer observed is reflected in just how built up it is, how rarely she can see the horizon. “Every window leads into a gray yard,” Kreutzer said of the Hofburg. “There’s no trees, you can’t really see the sky. The atmosphere of the film [started with that].”

Accordingly, the film’s few moments of relief come out of the natural world. “Wide shots [of nature] are commonly used to give an overview of and help establish new scenery. However, we wanted to add an emotional dimension to them and not distance ourselves from Elisabeth’s feelings,” Kaufmann said. “Nature, animals, and physical movement seem to be the only means to soothe her rebellious spirit. Elisabeth on horseback, swimming, running, and at the end her jump into the depths — that is her ultimate freedom. The camera is far away but still completely with her. For me, these are moments of hope and strength.”

The film slowly teaches the audience to distinguish these moments of energy, activity, and hope from the staid restrictions that threaten to smother Elisabeth. Combining the natural world and the canvas of cinema, Elisabeth meets the inventor and early filmmaker Louis Le Prince (Finnegan Oldfield), and at least within the frame of Le Prince’s camera, Elisabeth is able to control her own destiny. “Her enemy was really her own image. It was the oversized image of that perfect empress,” Marie Kreutzer said. “In those scenes [with Le Prince], she’s able to create another image and be part of creating it herself.”

The film’s ending is another tableau that combines the natural world and a stage of Elisabeth’s own making. Aboard an imperial yacht, Elisabeth executes the ultimate princess switch with one of her ladies in waiting and leaps into the sea, the compositions getting wider and more lush as the terrible pressure of being perceived subsides. “What pleases me most is the calmness [of the sequence],” Kaufmann said. “Ten long standing shots, the camera moving further and further away. You can feel the agreement among the women, one of them Elisabeth, who says goodbye and at the same time arrives at herself.”

‘NCIS: Los Angeles’: Kensi and Deeks’ Marriage Is Under Pressure