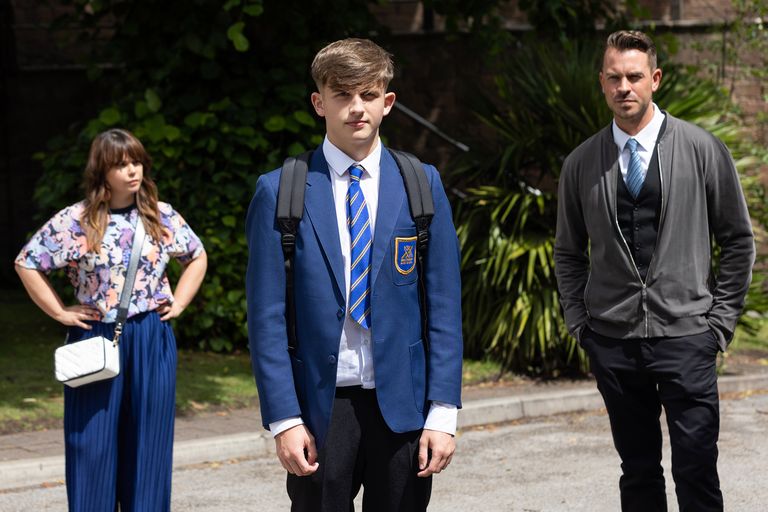 Hollyoaks viewers are currently watching Nancy Osborne struggling with the idea that Charlie and Ella want to have sex, despite being at the age of 14 and 13.

As many parents would relate to, the age of the children fills Nancy with horror and she is adamant that it can’t happen. But when she is warned that they may well go ahead and carry on in secret, which is more risky, Nancy finds herself having to make a difficult choice.

And while she acknowledges that Charlie and Ella are a sweet couple, Jessica Fox, who plays Nancy, has warned that the family’s lives will take a dark turn in coming weeks.

She told Metro.co.uk exclusively: ‘It does take a bit of a dark turn in my eyes, it being Hollyoaks Nancy also have problems of her all. You can’t be happy for too long!’

Discussing Nancy’s feelings about the situation, Jess explained: ‘They’re 13 and 14 so I think any parent would be worried. The older you get the more you realise how very young that age is! I always say to the young actors “Please don’t grow up too fast, it’s a trick!”

‘It’s an incredibly natural reaction and Nancy isn’t known for taking a step back. She piles straight in with a knee jerk reaction and thinks if she just watches them and keeps them socially distanced forever, that the problem is sorted! It’s not realistic with Ella living under her roof.

‘I think a lot of parents will relate and it adds a layer that Nancy is a teacher so she has this moral guidance towards children. But it is true to say if you push children in one direction they will go the other so she has to strike a balance.

‘I don’t she has a massive problem with the pairing, it’s more age and experience. I think also they have been more than any child should have to go through just in a couple of years. Both of them have been locked up, these horrible things have happened to them; if anything they need some really good counselling.’

The fact they have been through so much means there is an element of them being forced to grow up too quickly and Jess agrees that this is a massive factor.

Nodding, she continued: ‘Absolutely and that’s very true of Ella as she has such a fractured relationship with Mandy and she doesn’t want to replicate her mum’s mistakes. She wants to grow up and have this perfect relationship and Charlie seems to be along for the ride, he likes her but neither of them have any thought of the big wide world out there or of the consequences.

‘At that point, Nancy thinks she has solved it, she thinks they wouldn’t dare go up against her. Scott holds a mirror up to her face, saying wouldn’t it be better to know what they were doing rather than them doing it unsafely and Brooke adds they don’t want another teenage pregnancy. Nancy’s like: “Well, no that would be the third one!” She reconsiders her position.’

Which means there comes a point when she allows Charlie and Ella to be intimate and knows exactly what could be going om upstairs which is most likely at the top of most parents’ biggest horror moments in upbringing.

Jess sighed: ‘It’s very cringeworthy – she can’t help herself for wanting to know that all is okay and safe but at the same time, begging not to know any of the details. She also struggles with her precious baby growing up. I can’t imagine it, honestly! When I was that age I was oblivious to all this, I’d just be frightened that it was much too illegal. We were all too busy in chat rooms!’

Confirming that Ella and Charlie are planned as a long term couple and that the story will enter darker territory, Jess heaped praise on her younger co-stars.

She enthused: I have known Charlie since he was three! He’s about to turn 17, he’s moving up to the adult dressing rooms, having to do the adult hours, which I’m sure he’s not too thrilled about!

‘And he’s such a great performer and able to now take on these big new and exciting stories. And since Erin has been with us, she has done nothing but grow. I still see her as a little baby which is terribly condescending! It’s interesting to see her grow up into the future.’

This Morning's Holly Willoughby fights back tears over girl, 12, driven to self-harming by bullies for being ginger