With the release of The Serpent on April 2, Netflix is officially continuing its long-standing love affair with the true crime genre. Adapting the real-life story of the 1970s killing spree of one Charles Sobhraj (Tahar Rahim), The Serpent has all the makings of a juicy TV binge: a whole lot of murders, beautiful locations…and hot women, particularly in the form of a French-Canadian named Marie-Andrée Leclerc, portrayed by Jenna Coleman.

Now who was Leclerc in the real life story of Sobhraj’s crimes, you may ask? Well, she wasn’t just the Bonnie to the Bikini Killer’s Clyde. She came into the picture with her own unique backstory, and while her time with the mass murderer was short, it certainly played a role in how his crime spree ultimately ended. 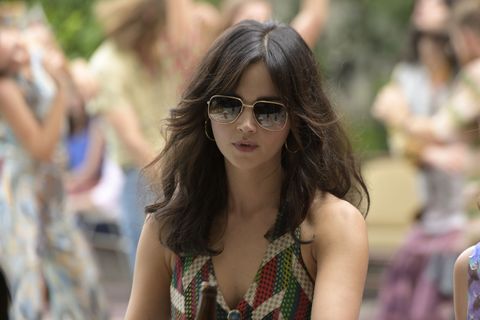 Wait—so who exactly is Marie-Andrée Leclerc?

Born just outside of Quebec in 1945, Leclerc had a career as a medical secretary prior to traveling to India in the mid-1970s. In 1975, she met Sobhraj and their love story blossomed through old-school love letters. They eventually met in person in Bangkok, and that’s where the twisted chapter of their relationship began.

Two years into their tryst, the twosome racked up a slew of petty crimes: They stole multiple passports (and their owners’ subsequent identities), posed as gem dealers, stole from various tourists, and eventually escalated to murdering tourists in Southeast Asia.

Despite her involvement with Sobhraj, Leclerc later denied knowing anything about his murder schemes, even though she was charged and convicted of murder as his accomplice.

The actress portraying Marie in The Serpent has some thoughts about Leclerc.

Actress Jenna Coleman later told RadioTimes her own thoughts on Leclerc’s alleged ignorance, and she voiced a theory: Perhaps Marie compartmentalized parts of what actually happened.

“I think the [question of] ‘is she a victim or is she not’, how much of her was brainwashed, how much of it was a choice to be there and a choice to live in the delusion; I think that’s what’s really interesting, to make the choices that she made in keeping this reality in a way that she could so that she could keep existing and being with Charles,” Coleman said.

Despite questions of Marie’s culpability, the couple was eventually captured in India, where they were both sentenced to life in 1976.

Where is Marie Leclerc now?

Leclerc passed away in April 1984 from cancer. After she was diagnosed while in prison, the Indian government decided to overturn her conviction and allow her to briefly return to Canada for the last moments of her life. Sobhraj, on the other hand, is still alive and serving out his sentence in Nepal.

Want more dirt on all your favorite Netflix shows? Yeah. We know you do. You can find all of our entertainment coverage here.

Disney+ Price to Increase in 2021, Ahead of Release of New 'Loki' Series with Tom Hiddleston

'Dexter': Here's What Convinced Michael C. Hall to 'Be Surrounded by Dead Bodies' for Another Show