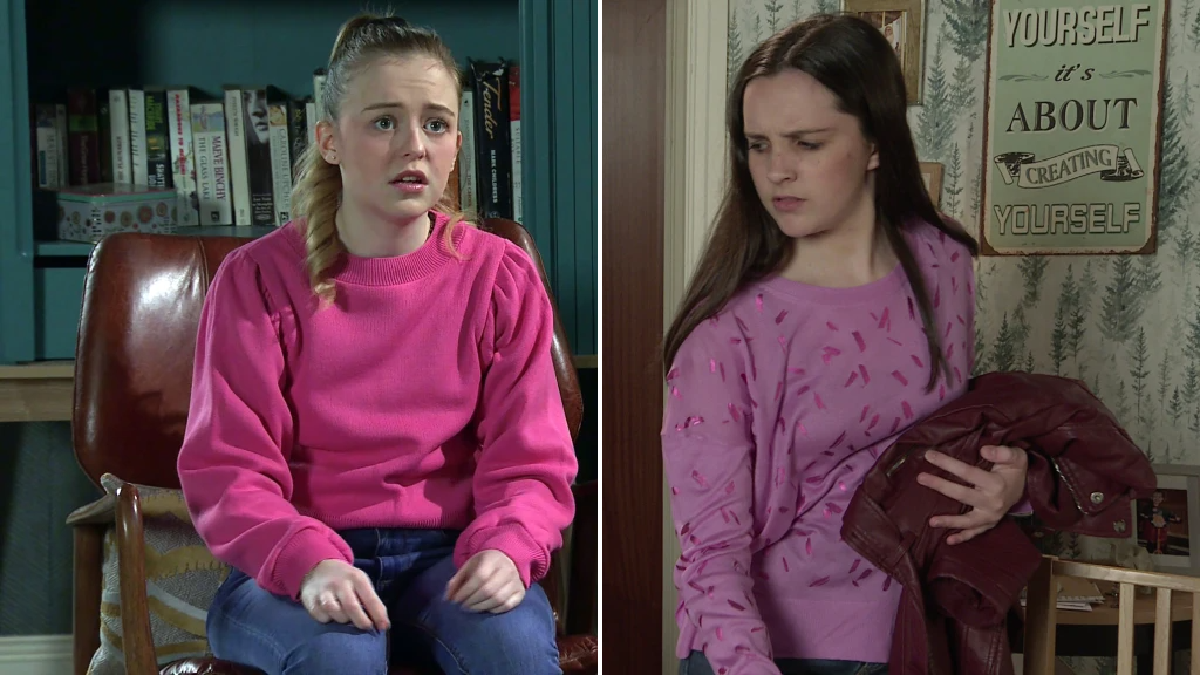 Coronation Street viewers have watched with heartbreak as teenager Summer Spellman has battled with negative body image feelings, which has led to her falling ill with diabulimia, a condition in which a diabetic controls both their insulin and their issues with food.

Feeling hatred for herself, Summer has been secretly hiding purging but as Amy Barlow (Elle Mulvaney) overhears her in the bathroom, Summer becomes terrified that she will share her condition with others, including Billy Mayhew (Daniel Brocklebank) and Todd Grimshaw (Gareth Pierce)

Harriet Bibby, who plays her, explained: ‘She just goes into panic mode and tries to get rid of Amy out of the flat as soon as she can so she can make herself sick to try and balance out what she’s eaten in the day.

‘Amy walks back in on her and Summer’s quite unsuccessful in covering it up and pretending that it’s just a bit of an icky tummy.

But Amy’s not daft, is she? She knows what’s happening. So she kind of blows her cover.’

Amy is understandably worried for her friend and Summer becomes terrified about what Amy will do with the information.

‘I think with the people that I’ve spoken to about this storyline, we’ve discussed how people who are going through similar things with eating disorders, that the most important thing they can do is conceal it from everyone,’ the young star reflected.

‘And they get really, really clever with hiding what they’re doing. I think Summer’s worried that Amy’s found out, because she knows that Amy’s not daft and she knows that Amy probably knows the right thing to do is to tell Billy, and get Summer the help that she needs.

‘But obviously, Summer’s not prepared to do that. She doesn’t want to do that. So I think she’s just panicking. What will Amy do with this information? Is she gonna go and tell Summer’s dad?’

It’s a difficult position for Amy to be in – she wants to preserve her friend’s trust but she also knows that things can’t go on like this.

So what will she do?

‘Summer definitely doesn’t want to admit that there is an issue, so it’s tricky because she doesn’t want the help at the moment when Amy catches her,’ Harriet mused.

‘I think the best thing Amy could do is just to try and talk to her and try to make Summer see that getting help is the best option.

‘And that will help her more than keeping it a secret and trying to manage this on her own. I think just talking about it would be the best thing.’

Sarah Paulson Has 1 Regret About Her Role in 'Impeachment: American Crime Story'