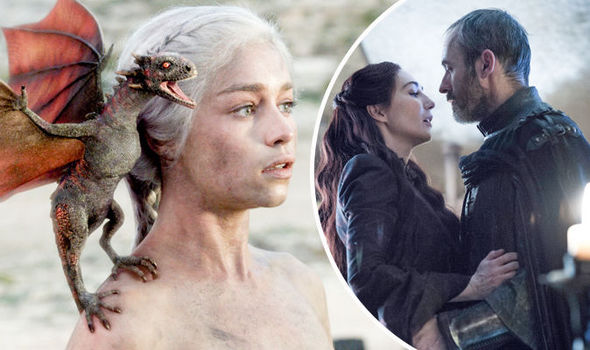 Game of Thrones might have finished last year on HBO but is still one of the biggest shows on the planet. During its run, Game of Thrones featured some of the raciest moments on television to date, from incest to orgies and has left no stone unturned when it comes to sex. As the show went on, there was still a regular dose of nudity and sex along with visceral gore in each season but it appeared this explicit content was toned down somewhat. If you’re wondering how each of the first five seasons compare, here is a breakdown of the sexual and nudity content.

Out of all of the seasons, the first one featured the most amount of sex. Some of the standout moments included that shocking scene between Cersei Lannister (Lena Headey) and twin brother Jaime (Nikolaj Coster-Waldau); a sequence involving Littlefinger (Aidan Gillen) instructing two of his prostitutes in how to please clients visiting his brothel; and Khal Drogo (Jason Momoa) having rough sex with his new bride Daenerys Targaryen (Emilia Clarke).

Season four was the second naughtiest run of the series, this may partly have been thanks to the steamy moments between Oberyn Martell (Pedro Pascal) and his lover Ellaria Sand (Indira Varma). In the books, the character of the Red Viper is said to enjoy the company of both sexes and this is alluded to in the TV series.

In terms of the episodes themselves, the first-ever episode of Game of Thrones was one of the naughtiest in the history of the programme. While this instalment consists pretty much of just female nudity, this starts to change as the show progresses.

Second place was the third episode of season five called High Sparrow, there were scenes in a brothel in Volantis as well as Tommen Baratheon (Dean Charles Chapman) and Margaery Tyrell (Natalie Dormer) consummating their marriage. There are a total of 10 nude scenes in this episode there is also an appearance of male nudity, marking a small shift.

In third place was episode four of season five – called Sons of the Harpy – which saw two penis appearances. But the majority of nudity was still female. 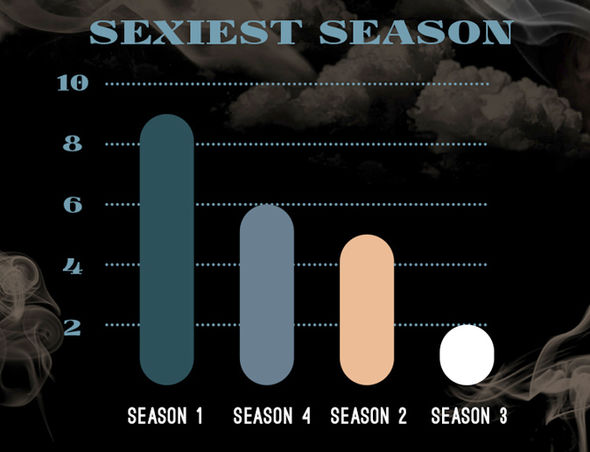 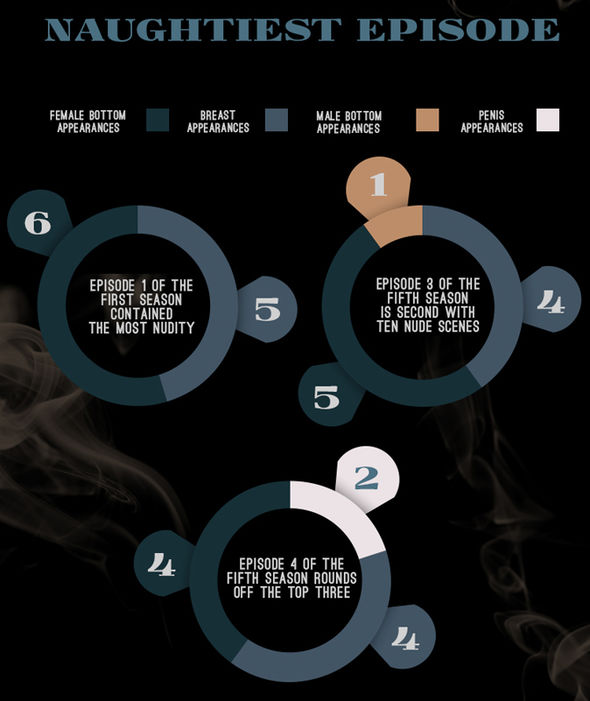 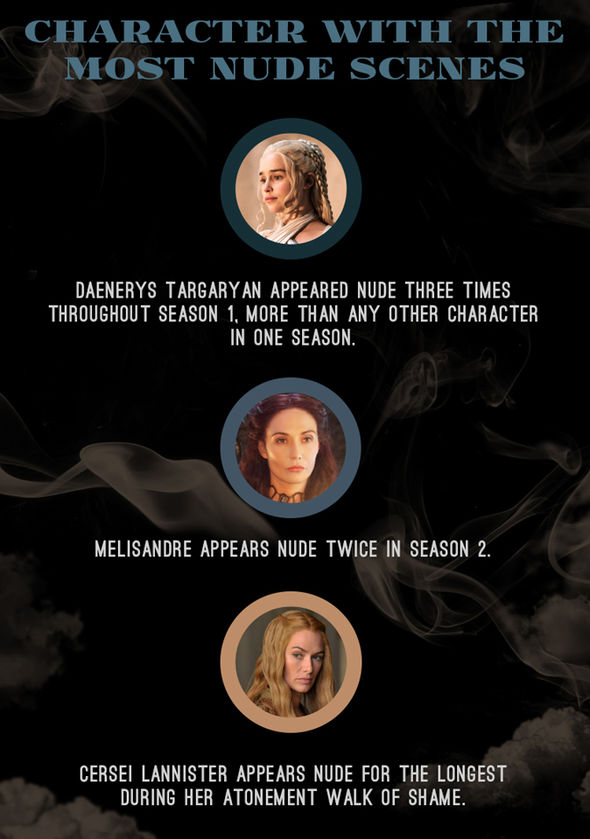 When it came to the characters with the most sex scenes, the Lannister clan came out on top. We’ve seen how Jaime and Cersei like to keep it in the family, while Tyrion (Peter Dinklage) has a penchant for call girls.

It will come as little surprise that the character with the most scenes in the buff is Daenerys. Compared to any other character in season one, she was seen frequently in her birthday suit.

Melisandre (Carice van Houten) seems to disrobe those flowing red dresses at least once each season and does naked scenes often. Who can forget the time she gave birth to that shadow baby in a cave or the time she tried to seduce Jon Snow (Kit Harington)?

In fact, she even whipped her kit off in the first episode of season six as part of a big twist. We bet fan boys weren’t quite expecting that! 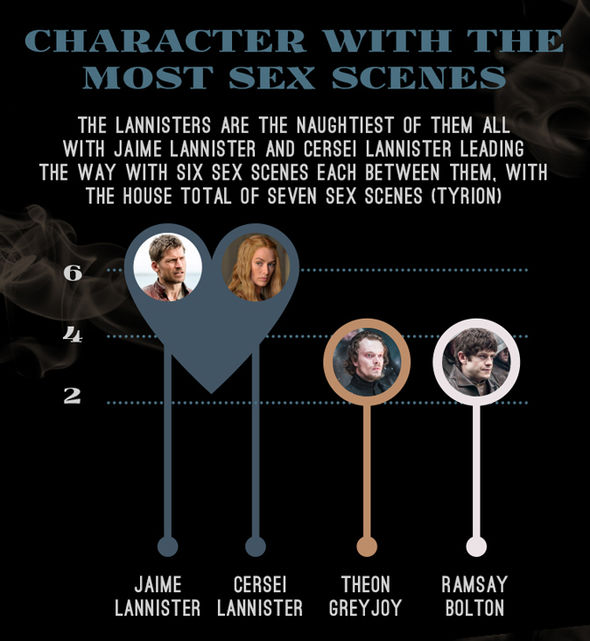 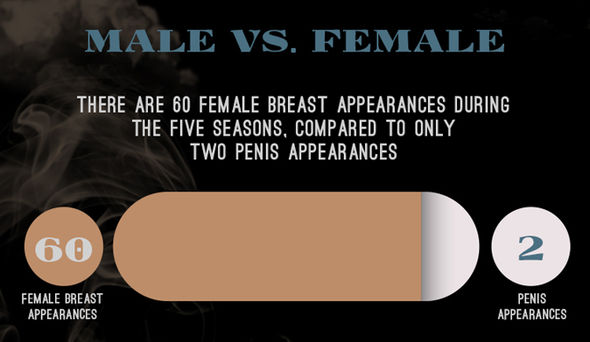 The figures compiled by www.myvouchercodes.co.uk also revealed the massive imbalance between male and female nudity. Across the five season, there have been 60 breast appearances to a mere two penis appearances.

In recent years more actresses have spoken out about the disparity in the levels of nudity between the genders, they are now calling for more of a balance in the bare flesh seen on screen.

However, this is something that has not gone unnoticed among the cast of Game of Thrones. Among those to have spoken out about it are Carice, who gave a definitive “hell yeah!” when asked if she wanted to see her male counterparts bare all in front of the camera.

Carice said: “We can see machine guns but we can’t see f**king – sorry – people? I really don’t get, I have to make a point here.”

Natalia Tena, who plays Wildling Osha, did not mince her words either, previously saying: “I think it’s really unfair, every actor, any actress has had her t*ts out. Every single actress I know. Blokes it’s like, let’s see some c**k. Do you know what I mean? Let’s make it more even.”

Sibel Kekilli, who played Tyrion’s lover Shae, wanted to see more male nudity, saying: “Yes, of course. Why are all the women naked? I mean good-looking guys. I want to see Conleth Hill and Nikolaj and Peter Dinklage.”

Natalie Dormer said in a previous interview with The Daily Best: “I suppose it’s just the rules of broadcast television, isn’t it? I think Thrones has been better than your average show with the equality, but they could definitely ramp it up! Absolutely.”

Even the Mother of Dragons has spoken it and said: “I think there should be more equal nudity. There’s plenty of female nudity, myself included, and I think it should be a bit more of a discussion that we get some more equal male and female nudity.

“I think it is a discussion that should be had but I said this in a magazine and then my mum told me off, so I have to stop talking about it on television. Yes, free the penis!” she told US chat show host Conan O’Brien on his programme.

Interestingly, the men of Game of Thrones are less in favour of it. Kit, who has bared all, spoke about it a couple of years ago. He said that the show contained more male nudity than “any other show” on television. However, he conceded that the “ratio” saw more instances of women in the buff than their male counterparts and said there should be “an equal amount”.

More recently John Bradley – who stars as Sam Tarly – told Express.co.uk: “I can only answer this question from my very unique standpoint but I just don’t think naked men have the same aesthetic appeal. I don’t think you can light them as well, I think there’s all sorts of hair and stuff that plays a part in it.”

He continued: “Basically, you’re asking for equality on screen, I imagine. There’s enough naked men, isn’t there? There’s lots of them. It’s a broader question about why are we so offended by nudity anyway because you’re seeing things that everyone’s already got?”

Given that the issue is being discussed more by the cast and crew, it may have an impact on the decisions made on set in forthcoming seasons. Fans will have to watch this space to see if more equality will eventually be introduced and if indeed it will be a case of free the penis.