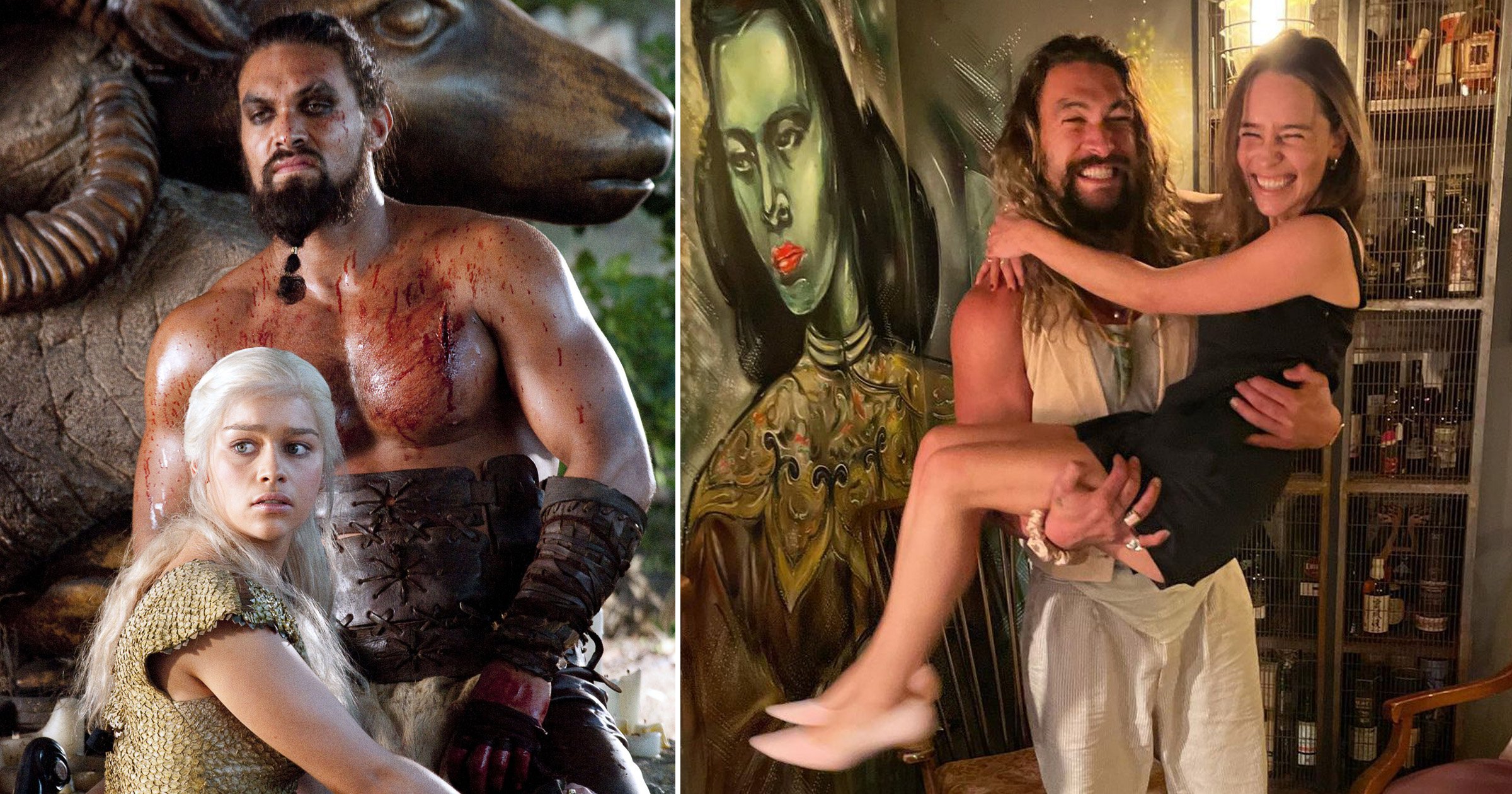 Emilia Clarke is continuing with the Game of Thones nostalgic vibes on her Instagram as she welcomed a visit from her former co-star Jason Momoa.

After delighting fans with throwback snaps of Iain Glen, who played trusty advisor Ser Jorah Mormont to her Daenerys Targaryen throughout the smash hit HBO show, Emilia has now taken to social media to reunite her Khaleesi with his Khal Drogo.

In the snap from what was sure to be a fun night out together, the pair both beam at the camera with identical cheesy grins as Jason, 42, holds 34-year-old Emilia in his arms, while she wraps her arms around his neck.

Next to the photo of them in an atmospheric bar, Emilia tagged her pal and wrote: ‘When your sun and stars rolls into town you check that he can still bench press a Khaleesi #💪🏻 #😘 #drinkingwithdrogoimamazedwesurvived #theboysarebackintown
#likeheneverleft #🥰’

Jason was in the comments, ready to complete the Dothraki conversation, and return the compliment, as he posted: ‘love u forever moon of my life ❤️❤️❤️❤️❤️❤️❤️.’

Emilia wore a chic black dress and pale pink heels for their surprise reunion, while Jason, who has maintained his beard and long locks for the Aquaman franchise, was dressed in loose white trousers, white tank top and a cream waistcoat, with a chunky bracelet, rings and a large green pendant around his neck.

The pair worked closely together on the first season of the epic series as husband and wife, before – spoiler – Drogo was dispatched rather unglamorously after dying of an infected wound.

However, the two actors have maintained a close relationship ever since, with Emilia having praised Jason for his help in handling the series’ sex scenes as she was an inexperienced performer on set at the time.

Speaking on the Armchair Expert podcast with Dax Shepard, Emilia remembered: ‘He took care of me in an environment where I didn’t know I needed to be taken care of.’

Reflecting on the scenario, Emilia said she realised only now ‘how fortunate’ she had been.

‘That could’ve gone many, many, many different ways. Jason was an experienced actor who had done a bunch of stuff before coming onto this [Game of Thrones].

‘He was so kind and considerate, and cared about me as a human being.’

Bradley Walsh ‘cuts The Chase short’ as players rack up massive score: ‘See you next time’