On Tuesday’s episode of FBI, titled “Brother’s Keeper,” viewers will meet Maggie’s younger sister Erin (guest star Adrienne Rose Bengtsson), who moves to New York City to attend Columbia University. At first, it appears things between the sisters are on solid footing, but as the episode progresses, it becomes very clear that there may be something more serious going on with Maggie’s younger sibling. In ET’s exclusive sneak peek from the upcoming episode, Maggie is desperately tracking Erin’s whereabouts on her phone when her partner, fellow agent O.A. (Zeeko Zaki), swings by and questions her on her “hardcore” tactics. 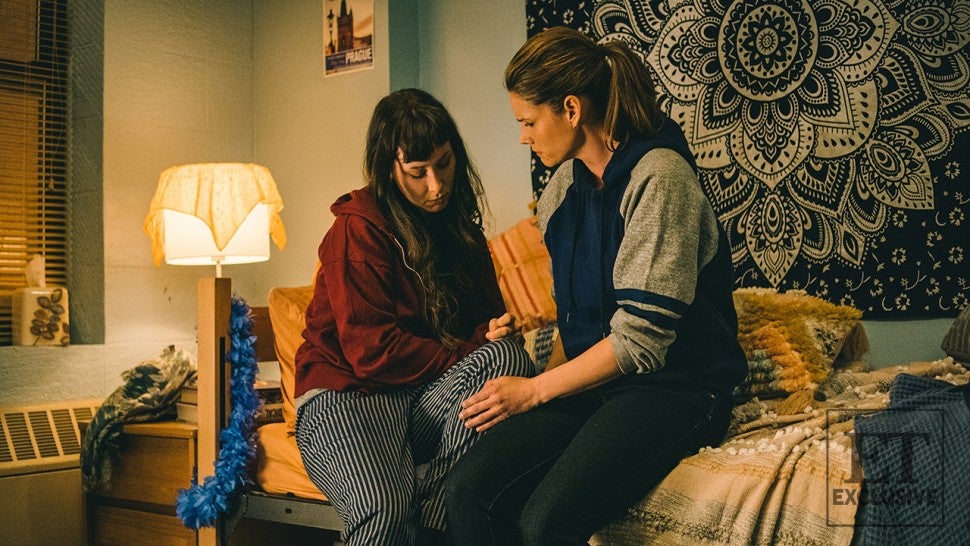 FBI star Missy Peregrym, who gave birth to her son with husband Tom Oakley last March, was “excited” to work on this particular episode, which delves into a very prevalent and serious issue, because it revealed a different layer to Maggie and an aspect of her non-work life that’s rarely seen. “The topic is really tricky,” the 38-year-old actress told ET, “and I was excited to play that and the nuances of [a fraught relationship]. Having two sisters myself, I felt connected to that immediately and was excited to give that depth to Maggie.”

Ahead of the new episode, Peregrym discusses raising her 1-year-old son, Otis, as a working mom, digging into Maggie’s relationship with her sister and her hopes for the future of FBI.

ET: How are things going so far this season?

Missy Peregrym: It’s been going great, short of having a child and bringing him to work and feeding him while filming, which is something I’ve never done before. It was a huge learning curve! But in regards to our show and the season, I really feel like we’ve found a really wonderful groove — the entire team, really. With our characters and the storytelling, it just feels more connected. I feel like we know what we’re doing now. It’s so hard to start a show and now that we’re in our third season, we can feel the smoothness coming into it now, which is great.

Do you feel a bit of comfort with playing Maggie now that you have had a couple of years under your belt in her shoes?

We’re always trying to. We’re a procedural show and it’s a very fast-paced story every single episode. I’m always trying to put in what I can that’s extra, building within the character. They are definitely writing some more for Maggie this year, which has been really fun to play. So I rely on the writing to be able to do more things and I always welcome it. I’m always excited to expand her story.

In this week’s episode, we get to meet her younger sister, Erin, which adds a different layer to who Maggie is and reveals more about what makes her tick. How excited were you to flesh that side of her story out?

I was really excited. First of all, Adrienne Rose Bengtsson was wonderful and I really, really enjoyed working with her. It’s a very tricky thing to have to come in when you’ve just met somebody and all of a sudden you’re supposed to show history of your whole life together. She was incredible and really present. I hope we can work together again. Obviously the topic is really tricky as well, and I was excited to play that and the nuances of [a fraught relationship]. Having two sisters myself, I felt connected to that immediately and was excited to give that depth to Maggie. What’s really fun is, for the most part, I try to play the vulnerability of Maggie’s position. She really cares about the people that she’s trying to help — everybody really trying to do their job. But she’s pretty firm and very quick to do her job and very serious for the most part. And it was really nice to play a different color with her sister to show ease. We haven’t really been able to do that because Nestor [Vertiz, played by Josh Segarra,] was a boyfriend and it was a different thing. It was fun.

Now that we’re getting to see Maggie interacting with her sister in this episode, what do you think that that will bring out in her that we maybe haven’t seen before?

Yeah. It’s very easy to have a conversation and calling people out on stuff when it’s your job and you don’t really know the person because there’s nothing to lose. I feel like there’s everything to lose when you’re having a difficult conversation with somebody that you really care about. Maggie second-guesses herself and she has an instinct [that something’s wrong] and she’s not really sure if she can trust it. She’s not really sure how to handle the scenario because she loves his sister so much and she wants things to be okay. But she doesn’t want to screw up. She doesn’t want to hurt the relationship.

FBI was recently renewed for a fourth season, so there’s security knowing you have another year of work on the show. Is there anything you’re interested in delving further into with Maggie now that you have another season on the books?

I would really say just anytime you have a family dynamic, that’s really interesting. I always think it’s great when you can have character dynamics on a personal level. And again, it’s very close-ended on our show, but it’s really important. They’ve done a really good job this year with all of the characters. That’s how you care about them so much when you see the struggles that they have while doing this job. And so I really would always fight for that — to get to know all the characters a little bit better. With Maggie again, family stuff is always great. Anything that I can play that’s more personal, I get happy about. So yeah, we’ll see. And of course, we’re a very tight crew now. For me, it was wonderful news that we get to spend more time together.

FBI airs Tuesdays at 9 p.m. ET/PT on CBS. For more, watch below.

Behind the Scenes of the 'FBI' and 'FBI: Most Wanted' COVID-Driven Season Premieres (Exclusive)

To stay up to date on breaking TV news, sign up for ET’s daily newsletter.

Uhh, Peter Weber Just Said Mykenna Is His Top Pick for 'The Bachelorette'

Who's Vicky in EastEnders? Callum’s hiding another big secret from Whitney that will leave her heartbroken