The former Brexit Party leader held a segment on his show titled ‘WTF…MARKLE-ARKEY’ in which he criticised Meghan for a story she told in which she is compared to South African leader, Nelson Mandela. 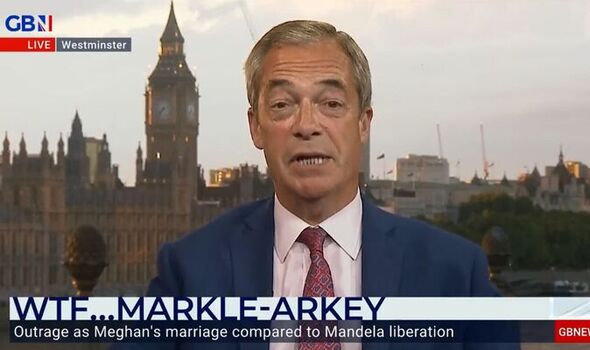 On Tuesday evening, Mr Farage aired his thoughts about the comparison on his segment of GB News.

In an interview with The Cut magazine the Duchess of Sussex spoke about the time a South-African member of the Lion King told her they “rejoiced in the streets” when she married into the royal family much like they did for the freeing of Mandela.

Recalling the moment in the interview, the Duchess said: “He looked at me, and he’s just like light.

“He said, ‘I just need you to know: When you married into this family, we rejoiced in the streets the same we did when Mandela was freed from prison.’ ”

The Cut magazine added: “Of course, she knows she’s no Mandela.” 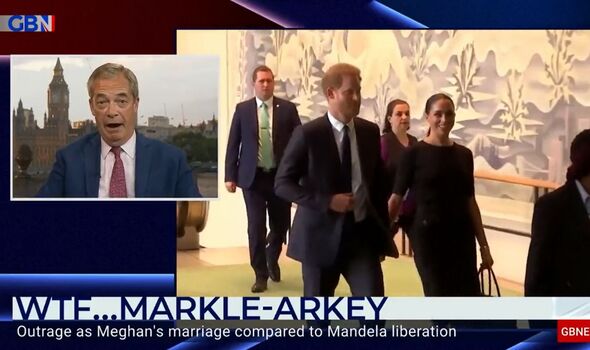 After learning of the Mandela comment, Farage slammed Meghan for having “an over-inflated sense of self-importance”.

He said: “I don’t think we’ve ever come across anybody from any walk of life, let alone the royal family, with such an over-inflated sense of her own worth and self-importance as Meghan Markle.

“And it’s pretty clear from this interview she doesn’t intend to stop talking.”

The presenter’s criticism did not stop there as he turned on both of the Sussex’s for their recent behaviour which he claims is causing “incalculable damage”.

He continued: “The damage she and her husband are doing to the Queen and to the Royal Family is absolutely incalculable.

“I do think, not just here but in America too, people are beginning to wake up.”

Mr Farage concluded the segment by giving his opinion on the Duke and Duchess of Sussex.

He said: “These two, self-obsessed, hypocrites, liars are in the end gonna be ignored by everybody, at least I hope and pray so.”

The criticism comes after the second episode of Meghan’s Spotify podcast ‘Archetypes’ was released on Tuesday in which she discusses the term ‘diva’ with singer Mariah Carey.

What happened to Fetty Wap's eye?