There’s a new MAFS baby boy on the way!

The Married at First Sight season based in Dallas gave us the successful match of software saleswoman Danielle Bergman and construction project manager Bobby Dodd.

The two had instant chemistry and it was clear this couple was saying ‘yes’ on Decision Day.

Now fast forward to two years later and their new family has doubled in size.

They are officially a family of four

After getting married as strangers on the hit Lifetime show in 2018, baby Olivia made her debut to the family less than a year later.

Bobby admitted he always pictured himself having a son but his heart quickly melted with the birth of his first daughter. Now, he wouldn’t mind his second child being a girl as he believes Olivia would enjoy a little sister.

However, it looks like Olivia is going to have a little brother to boss around instead as the couple recently announced the gender of their new addition.

On the MAFS spin-off Couples Cam, Danielle received a voicemail from her doctor that she couldn’t keep to herself. Although he wanted to be surprised by the gender, Danielle couldn’t hide her excitement about their new son.

Bobby wasn’t even upset that Danielle spilled the secret, he shed tears in happiness for his future son.

The couple agreed the new baby would carry on his father’s name. Although he goes by Bobby, his legal name is Robert Elvin. The passing of his family name was super important to Bobby.

Baby Bobby should be making his debut in early 2021.

Danielle has had a difficult pregnancy in the past and this one isn’t proving any easier. She suffers from severe morning sickness and spent almost every day of her last pregnancy throwing up.

Regardless the MAFS couple is ecstatic about the new baby and fans are offering their well wishes in her comments.

One user wrote, “Oh these pictures are amazing!! I think he looks like Bobby! Olivia looks like you. You can tell they are siblings though!” 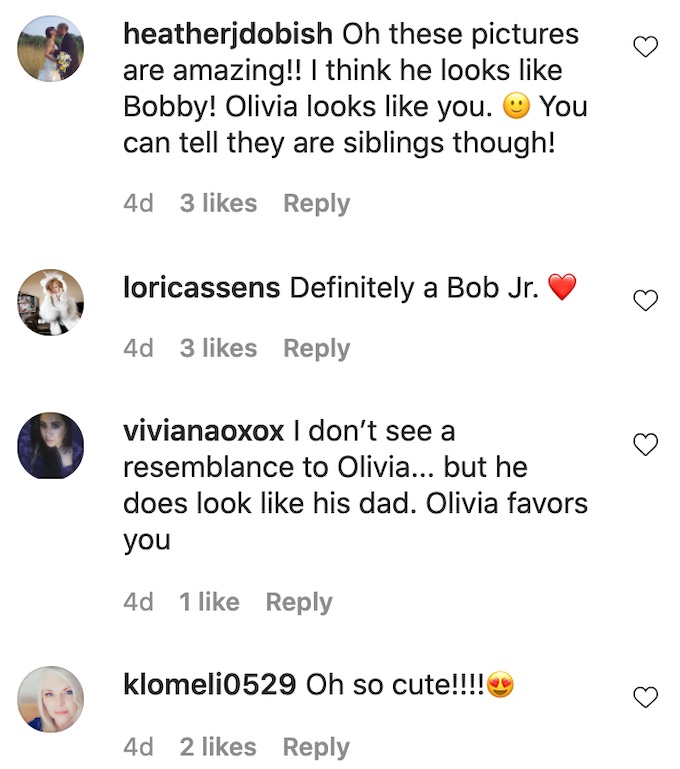 It’s clear fans thinks the new baby will resemble his father but only time will tell.

Do you think ‘Little Bobby’ will look more like his mother or father?

Married at First Sight Atlanta returns in January 2021 on Lifetime.