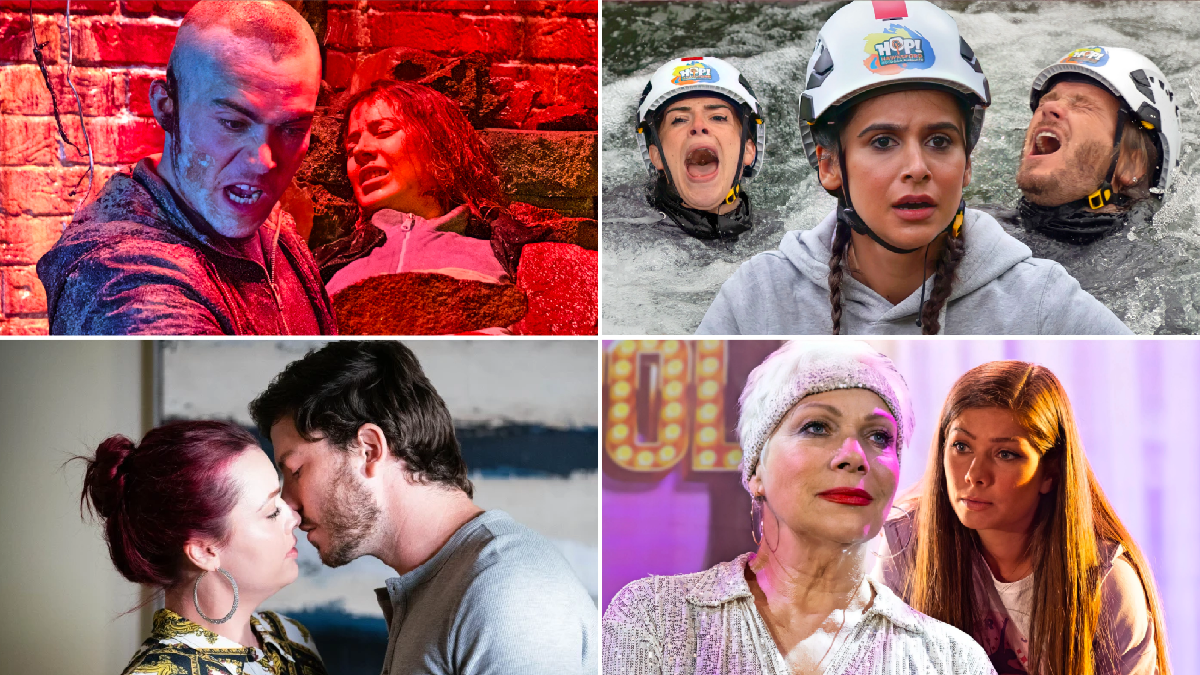 Death and disaster reign supreme in what promises to be one of the biggest weeks soapland has ever seen!

After a break last year due to the Covid-19 pandemic, ITV’s famous super soap week returns with a bang – quite literally – and Coronation Street and Emmerdale are NOT holding back!

As real and metaphorical storm clouds gather over the famous cobbles, the residents of Coronation Street make plans for Halloween parties and holidays, oblivious to the tragedies waiting around the corner.

Debbie Webster’s House of Horrors attraction is at the centre of the drama, and thus no one spots the ominous shifting of earth around the Platt’s sinkhole – the catalyst in the horror to come!

Make no mistake, it’s not to be missed.

Emmerdale, similarly, is set to go all out, with a week featuring FOUR stunts and a huge waterfall sequence – and at least one character will die at the hands of Meena Jutla!

EastEnders, meanwhile, is rocked by death as well, as Gray Atkins discovers his dad has died, while Hollyoaks’ Trish Minniver big day arrives, but – with conflict aplenty between she and Leah Barnes – will Blackpool Apalooza go to plan?

It’s a week for the soap history books, likely one you will look back on and remember for years to come. We’re not giving away the outcomes, but if you’d like a little taster of what’s to come, then we’ve got you covered.

Abi watches a video of Corey packing for Germany and thus sets off with a gun in her possession. She finds him at the Horror-nation Street event, and follows him. The storm results in both Abi and Corey falling into the sewers below, and with the water rising around them, Corey takes hold of the gun.

Dev, Aadi and Asha leave for their holiday, but as the thunder crashes overhead they find themselves lost on a country road. Heading for the same country lane is a prison van rushing injured drug dealer Harvey to hospital. After tragedy strikes, Dev is forced to make the heartbreaking decision between his kids. Believing Asha to be in more danger he drags her away from the car.

Kevin arrives at the crash site but is attacked by Harvey who steals the pick up truck. Harvey makes it back to the street, hoping to find Leanne. Leanne runs for her life, but will she escape? Or will murderous Harvey get his revenge?

The survival challenge begins, and the survivalists jump into their rafts, before setting off down the river. Billy and Ben try to rally their respective team members. It seems to be going rather well, but the day soon takes a horrible turn and many are left fighting for their lives in the menacing waters.

Meena, on a mission to kill Victoria, damages her harness. However, Manpreet takes Victoria’s harness, and Meena watches on in fear.

Charity and Mackenzie separate themselves from their respective groups in order to cheat. Things take a turn, however, as Mack hears a loud scream coming from the pond, and – as he approaches it – he sees large ripples moving across the water. Has Charity vanished beneath the surface?

Gray’s money issues continue, but that’s soon the least of his worries, as he later gets a call that leaves him devastated: his dad has died. He tells Whitney he didn’t expect to be so cut up, and after going through some of his dad’s belongings, he kisses Whitney.

Liam ignores a call from Cindy as Peter arrives to say his sister’s also been in touch with him wanting money – Janine covers for Liam. Over at The Arches, Ben leaves Liam on his own and he’s struck with an idea. Janine later spots Jay and asks him for a job at the car lot but he’s not having any of her nice act and refuses. She then fills Liam in on her plan, and it’s clear Janine is back to her old ways!

Aaron, Harvey’s son, arrives in the Square and asks for directions. Harvey, meanwhile, is delighted to see his son, but Dana doesn’t share his enthusiasm. Aaron gives Harvey some bad advice and rudely snaps at Dana for not taking their dad’s side, leaving her humiliated.

The day of Blackpool Apalooza arrives, and Maxine is soon furious with her mum, who continues to bully Leah, branding her a ‘waste of space’.

Trish’s bullying inspires Maxine, as she throws herself into coaching Leah in the hopes of winning Blackpool Apalooza! Leah, however, is worried about going against Trish’s plans, as the big day arrives.

Will she stick to Trish’s strict routine? Or will she perform the new moves Maxine has taught her?