Warning: The following contains spoilers for Episodes 5 and 6 of Cobra Kai Season 4.

From victim to bully and back again, Cobra Kai‘s Eli Moskowitz has had quite the karate journey thus far.

At the beginning of the newly released fourth season (all 10 episodes are now streaming on Netflix), the student better known as Hawk still has a long way to go to make amends to his friends and dojo, and realize his true potential. But as the season progresses, the challenges he faces push him to extremes both mentally and physically, causing the former Cobra Kai tough guy to consider quitting martial arts all together. 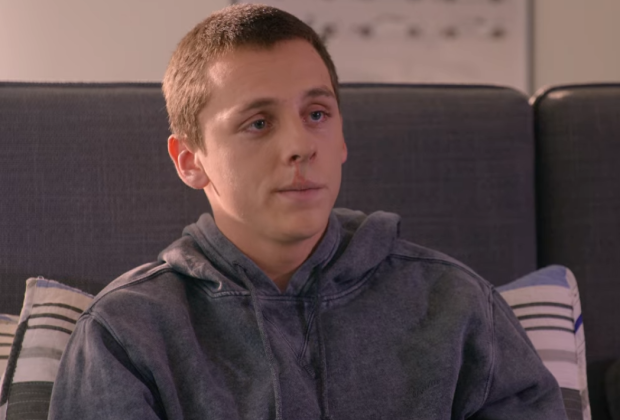 In Episode 5, Hawk finds himself in his former dojo’s crosshairs, as Robby, Tory, Kyler et al ambush his tattoo session and take a straight razor to his signature ‘do. With his killer mohawk stolen from him, so too is the boy’s confidence. As a result, he’s not only embarrassed following the attack, but also feels his reputation as a badass fighter is completely destroyed, causing him to step away from Miyagi-Do and Eagle Fang for good.

Luckily, his solid friendship with Demetri is ultimately what gets him back on the mat, as his “binary brother” comes through to remind Hawk of who he is and convince him not to give up on himself.

TVLINE | With his bullying days behind him, Hawk’s now on a bit of an apology tour. How would you describe his journey in this season?
JACOB BERTRAND | Season 4 is definitely another redemption arc for Hawk. He had burned a lot of bridges in Season 3, and I think he essentially stepped back to Eli when he loses the ‘hawk. Seeing him be able to build himself back up and surround himself with good people was a really fun arc to play because I got to spend a lot more time with Gianni [DeCenzo, who plays Demetri]. It was cool going from zero to hero again.

TVLINE | Miyagi-Do and Eagle Fang make a solid attempt at uniting this season. Even though it’s been a rough journey for them, how would you describe the relationship between the two dojos?
Miyagi-Do and Eagle Fang… it’s like putting a huge V8 in a little Prius, you know? It might work in theory. It might drive a bit. But it’s definitely going to be a bumpy ride and it definitely looks weird. That’s my little metaphor for how Eagle Fang and Miyagi-Do team up. 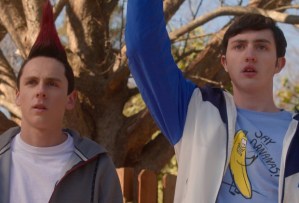 TVLINE | What does the loss of his mohawk trigger in him, and why is that so important?
For a long time, what Hawk struggled with was identity. When he was Eli and when he first became Hawk, being a part of Cobra Kai was such a big thing for him and his identity. That’s why he followed Kreese wholeheartedly. The mohawk was his symbol of pride. That’s who he was. I mean, he freaking called himself Hawk! The reason he gets a mohawk is, like Johnny says, he needs a distinction, like an eye patch or something. So that’s the first thing he goes to. “Hey, I’m going to give myself a mohawk and dye my hair blue.” So, I think losing that, he feels like “Lip” again. I think that’s a hard thing for him… to kiss the sun and then fall back down to earth.

TVLINE | Hawk even almost quits karate. Why was Demetri the person Hawk needed to help bring him back to the mat?
Demetri is someone who has always understood him more than anyone else. Even when Hawk was being bullied, Demetri was always there being bullied right there next to him. I think Hawk wanted to quit karate because at that point, everything just seemed almost pointless. He’d been at rock bottom twice now, and it’s like, “This is not going at all the way I wanted it to,” and he just wanted to start fresh, dig his eyes into his computer and just die there. But Demetri is his buddy, and he’s not going to let him sulk. He’s not going to let him feel low for too long because he loves him. They are binary brothers, and that’s one thing I really loved about this season was getting to film a lot more with Demetri, and seeing our characters bounce off each other. 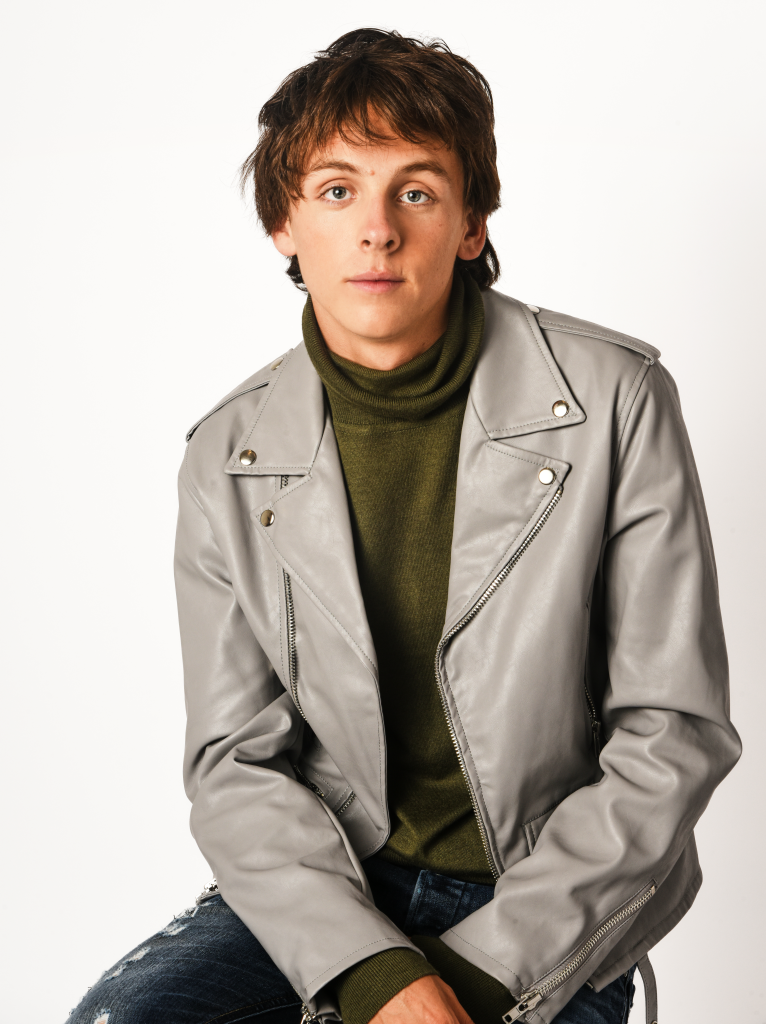 TVLINE | The fight scenes get crazier with every season. Has your training and prep gotten more intense throughout the years?
The training has always been rigorous. A lot of it is conditioning, making sure we can fight for a long time, stretching a bunch and then working choreography a ton. We do a lot of boxing. My character specifically trained in muay thai, since I throw a lot of elbows and knees. The training for this season was definitely hectic because we had so much filming to do. There was so much dialogue, and so many little vignette fights. They even brought in Dr. Dave, who is our chiropractor, and he was constantly resetting us, tugging our necks and cracking them like crazy. We were doing that all the time, and it was so needed.

TVLINE | How much time is spent choreographing each fight scene?
It varies. Sometimes you learn it on the day, and sometimes you’ve been prepping it for a week. One of the fights with me and Tanner [Buchanan, who plays Robby], I think we learned it two days before we went and fought. We didn’t have too many mishaps. I punched him in the forehead one time. I was supposed to hit him in the face, and he was supposed to do a little up block. He did a down block instead, so my fist totally drove into his forehead, and he was like “Ugh, I didn’t block that!”

TVLINE | Well, that sounds entirely like his fault!
Yeah. It wasn’t me. It was definitely him! [Laughs]